Upcoming Xbox One murderfest Ryse: Son of Rome doesn’t have superpowers, magic, or boss fights with mythical titans, but it might be just as violent as PlayStation’s God of War series.

Of course, the scale is very different due to mythology, but the flavor is still the same.

Set against the backdrop of the ancient Roman Empire, Ryse puts you in the shoes of a rage-filled warrior hellbent on bringing destruction to the hordes of enemies foolish enough to think that they’re the lucky ones who’ll cleave your head from your shoulders. It’s almost always the other way around, and in Ryse, the reversal is always gruesome.

In fact, the gruesomeness gets downright predictable.

During Microsoft’s recent Xbox One preview event in San Francisco’s Dogpatch neighborhood, I got to take my first strides in combat with Ryse’s leading man, Roman general Marius Titus, and found that he’s no less flamboyant in battle than God of War’s Kratos — despite the handicap of being a mere mortal. 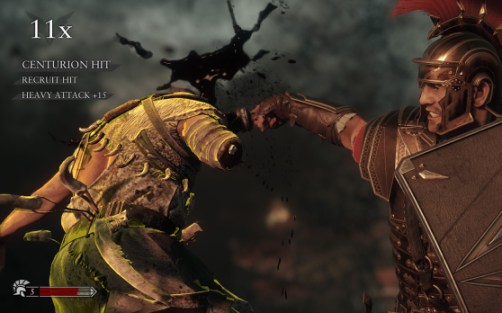 Above: Ryse’s combat is extremely practical compared to God of War’s flashy antics, but the finishing moves aren’t any less gory.

Whether commanding rows of skilled soldiers or cutting a swath through barbarian fire-spinners, Ryse excels in giving Titus some real battle finesse, with a variety of animations that transition quite smoothly into a variety of killing techniques. Every motion is decidedly realistic, with Titus stabbing, punching, and shoving enemies with short, punctuated attacks.

Overall, Ryse’s combat is decidedly more tame than what you’d expect from a God of War game, where it’s common for Kratos to dish out double-digit combos while waist deep in demons and monsters. Titus’ opponents are all very human, and while he won’t dispatch them with gravity-defying somersaults, his comparatively subtle three- to five-hit kill sequences aren’t any less brutal.

It’s definitely engaging at the start, especially when figuring out the learning curve. But the more you watch it, the more you start getting used to the grisly assortment of brute-force, execution-style acrobatics.

However, that’s not a quirk of the animation or the visual style of the game. It’s the combo system.

Throughout 90 minutes of demo gameplay in locales like the capital of Rome and the center of Colosseum, I had dispatched of most enemies with the same technique — X, X, X, and Y.

Occasionally, an odd enemy forces you to break his guard with a shove of your shield, but for the most part, the combat relies on hammering the two main attack buttons until you pull the trigger on a finishing sequence. Those finishing sequences are fun to watch, but the challenge is minimal, with enemies flashing a telltale blue or yellow to signal which attack will extend your combo score. Failing to play along carries no penalty.

It’s combat that’s definitely more grounded in reality than Kratos’ gravity-defying Daffy Duck routine, but at the same time, a “grinding” flow and feeling to the gameplay almost sets in too early, especially for a short demo.

But at the same time, I began to enjoy this distinct rhythm to Ryse, and as the challenge dimmed (on the “experienced” difficulty setting), I started to make up new goals: executing two enemies at once, seeing how long I could go without getting hit, and trying to kill archers solely by ricocheting their arrows. Thankfully, other segments break things up, like commanding catapults and spearing down archers.

I’m far from disappointed with what I’ve seen in Ryse so far.  Leading off a console launch with a new title is always risky, and developer Crytek risks losing its game in the shuffle. It definitely isn’t a God of War clone, but from what I’ve seen so far, it’s something that might surprise Kratos fans if they’re in the market for an Xbox One system. Either way, Ryse seems to do a good job of bringing on the bloodletting, even if the Son of Rome isn’t quite as sadistically creative as the God of War.