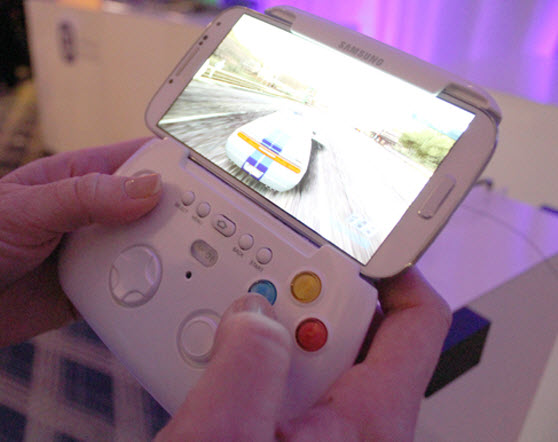 Samsung’s Galaxy S4 will come with a game controller that can attach to the bottom of the new smartphone. Such devices are part of Android’s continuing invasion of the traditional gaming market and the gadget-overloaded living room.

The gamepad is set to debut in May with as many as eight bundled titles. It connects with the Galaxy S4 via a Bluetooth connection, and you can also play the games on a television screen. The top of the gamepad has a dock, and the layout of the controller is similar to the buttons on an Xbox 360 gamepad.

The device, which doesn’t have a formal name yet but is bundled as the Game Arcade, will work with the Galaxy S4 and Android Jelly Bean 4.2. You can play your games on the Android device and display them on a 1080p high-definition television. The controller uses two triple-A batteries and has dual analog sticks, and it has shoulder buttons. It’s a lot smaller and lighter than typical game controllers, according to reports from the Samsung event last night.

The device is not compatible with earlier Samsung phones, and pricing hasn’t been revealed yet. The launch date is expected to be sometime in May.

The device will compete with other game controllers such as Moga, Green Throttle Games, and Nvidia’s Project Shield.