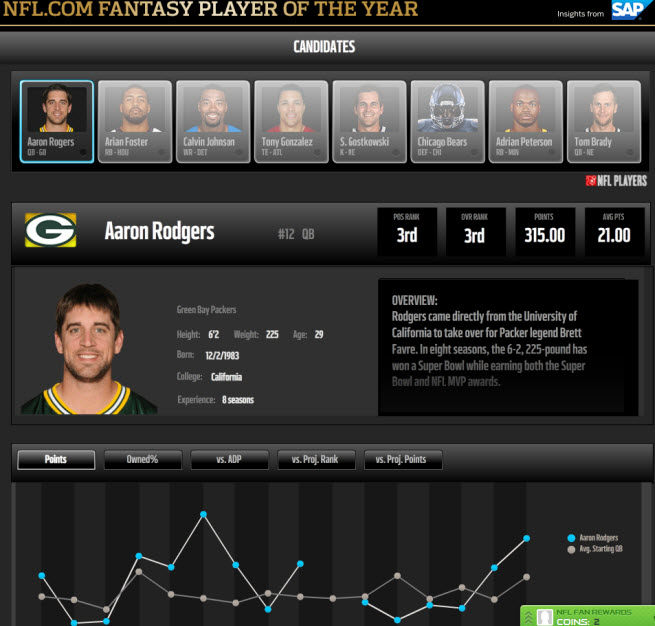 SAP doesn’t usually do much consumer software. Its enterprise software serves as the modern foundation for companies. But its analytics technology came in handy in creating an online dashboard for fantasy football fans.

SAP has provided its dashboard for fans who participate in the NFL.com Fantasy Player of the Year 2012 competition. The dashboard, which is live on NFL.com/Honors, shows the stats of the top eight finalists in a visually rich format. It combines SAP-generated analytics with NFL.com fantasy football data. It recognizes the football player that has outshined everyone else in fantasy football leagues.

The winner of the competition will be announced for Super Bowl XLVII at the second annual NFL Honors primetime awards special on Feb. 2 on CBS. SAP has all the data you’ll want on the finalists, with information from 16 weeks of fantasy football. It has overall season points, points per game, and average player figures in comparison to others who play the same position. The database also provides a week-by-week point graph, a quick analysis of each player’s performance and other data for fans. The site has gamification features (the use of game-like incentives for non-game applications).

“Fantasy football fans love stats almost as much as watching the action on the field,” said Jonathan Becher, chief marketing officer at SAP. “The SAP dashboard enhances the NFL.com Fantasy experience by distilling millions of data points and allowing fans size up their favorite players more easily. Soon fans will be able to use the analytical power of SAP to predict the most valuable players for their fantasy teams.”

In October, the NFL and SAP announced a multiyear marketing sponsorship, and the NFL will adopt SAP’s on-demand technology.