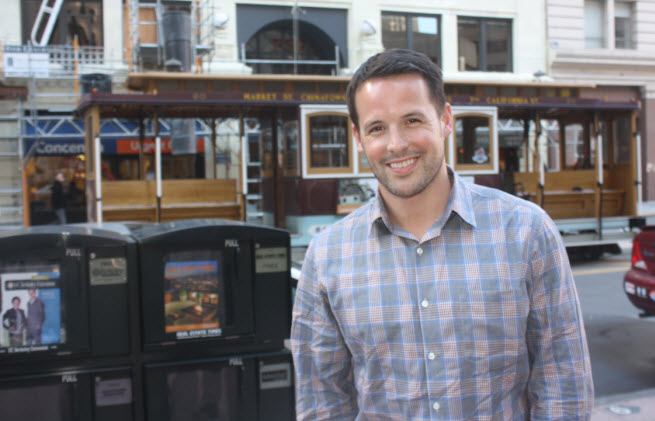 Scopely is building what it calls a “next-generation consumer entertainment games network.” That’s a fancy name for its platform for monetizing mobile games, distributing them, and getting them noticed.

But the Los Angeles company is drawing a number of marquee developers into its network. Today, Scopely is announcing that its first five partners for its Developer Network include the well-known indie studios Double Fine Productions, Big Cave Games, High Line Games, Rocket Jump Games, and Zupcat Games.

“We are creating a defensible, sustainable model in this space,” Walter Driver, the chief executive of Scopely, told GamesBeat. “We are doing everything other than making the game.”

Scopely has created a mobile-game platform that helps developers on a variety of fronts, including back-end infrastructure, centralized services, community management, distribution, marketing, cross-platform publishing, and monetization. In the past year, Scopely released three mobile games (such as Bubble Galaxy With Buddies) that have all been top-five titles. Driver said that shows that the company knows how to launch a mobile game properly. With any given launch, it works with 75 different partners — all in the hope of leveling the playing field for indie game companies as they square off against big brands and huge rivals.

Scopely is one of many firms in mobile gaming that do the work that traditional publishers once controlled in retail games. In mobile, firms such as ad networks, analytics firms, publishers, distributors, discovery firms, and monetization firms are all trying to provide vital services to game creators. But Scopely isn’t a publisher, and it is only publishing its own mobile games so that it can prove itself to the third-party developers.

“Our first-party games are in the service of the third parties,” Driver said.

The company is competing with a lot of players, including Electronic Arts’ Chillingo, which publishes a large number of mobile games. It also competes with Zynga, which has its own huge social and mobile-game business but recently began signing up third-party developers. Driver believes his firm can be a high-touch, trusted partner.

He believes Scopely can help the mobile-game companies that can make hits and are just starting to hit dozens of employees. Those companies have talent, but they still need help achieving the scope and scale necessary to compete with the big players. Scopely makes four to eight times as much revenue for a non-paying user compared to before. That’s because it has relationships with brands and embeds advertising inside its platform. It also integrates social mechanics into each game and helps the titles get discovered despite all of the noise in the app stores.

Some of these major indie studios release a game or two a year. That means they have no idea about the baseline performance for mobile games when it comes to retention in the first five days or percentage of the total audience that is monetized. Scopely, on the other hand, will have that kind of data and will help the studio hit its targets and scale its games as needed.

“We’re closer to a television network’s relationship, with the companies creating the content for that network,” Driver said. “We’re a new kind of entertainment company.”

Driver said that his company will work with the best teams and launch only about six to 12 games a year. Scopely will make money via a share of the revenues. The first games from partners will launch this spring.

“We work with them from the beginning to make our partners successful,” Driver said. “We don’t want to just work with them at the end, when the game is finished.”

San Francisco-based Double Fine is famous for titles such as Psychonauts and for raising more than $3.3 million on Kickstarter, validating the crowdfunding alternative. Big Cave Games, based in Dallas, created Orc: Vengeance on iOS. High Line Games in Brooklyn, N.Y., includes former Rockstar Games developers who created the popular word game W.E.L.D.E.R. Rocket Jump Games, based in Wellington, New Zealand, created Major Mayhem; and Zupcat Games, based in Buenos Aires, made Race Town on Facebook. All of the developers have millions of fans.

“You can’t build a factory around these experiences,” Driver said. “We’re not building tires here. These are very nuanced, artistic, creative experiences. You don’t want them all to be the same. We are building a configurable factory that lets people build all kinds of different vehicles.”