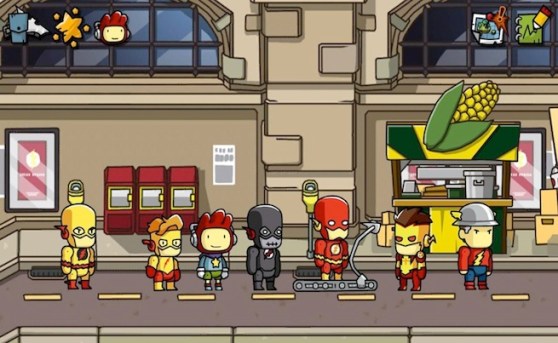 I won’t lie … when Warner Bros. Interactive reps handed out the itinerary at a special pre-E3 event, nearly every game journo in the room eyerolled at news of yet another Scribblenauts game. The 2009 original arrived with the freshest concept in gaming that year: Write any word to create any object and solve every problem. Five years later, it’s old hat.

Then they showed us Scribblenauts Unmasked. Yep. It’s cool again.

Publisher Warner Bros. Interactive basically handed their DC Comics licenses over to their Scribblenauts developer, 5th Cell, and it looks like magic happened as a result. Scribblenauts Unmasked (releasing this year on Wii U, 3DS, and PC) contains over 2000 characters and their variants — it has 33 different Batmans — plus items and vehicles from DC Comics’ nearly 80-year history. Including Aquaman, whom no one will ever use.

“We have all the DC Comics characters, the entire roster,” says senior producer Caleb Arseneaux. “We’re talking people who are mainline, New 52 Justice League and also characters who appeared in one panel in one comic in 1976.” 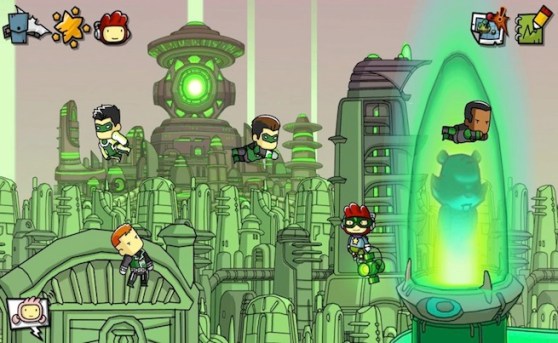 He’s not kidding. The hands-off demo then pulled back to show a hundred or so superheroes on-screen at once. Just at a glance, I spotted the Golden Age Flash and Atom, Ambush Bug, Firestorm, Starfire, Jim Gordon, Power Girl, Red Tornado, Abin Sur, Raven, and Booster Gold. Those are just the ones I haven’t seen in a video game before. Arseneaux confirms Unmasked also has 130 Green Lanterns, pretty much the entire Corps., plus the entire Blackest Night cast of Red, Yellow, Blue, Orange, Indigo, Violet, and Black Lanterns.

It also goes to a lot of familiar places in the DC Universe. We got a good look at the Batcave and Oa, home of the Green Lantern Corps., which featured a nice vista of futuristic green spires in the background. Other levels include Gotham City, Wayne Manor, and Wonder Woman’s home island of Themyscira. 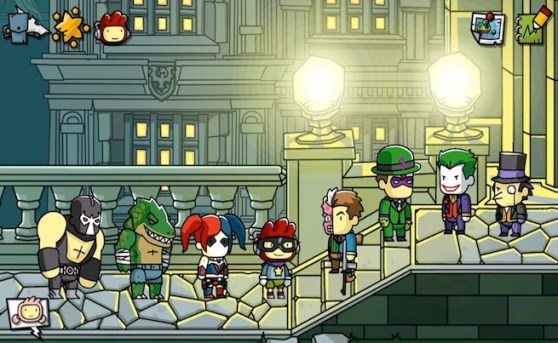 The plot sounds fairly threadbare, but who cares? Series hero Maxwell and his sister Lilly, both avowed comic-book fans, travel to the DC Universe to settle their Batman vs. Superman feud once and for all. Once there, they get involved with the entire Justice League to deal with some as-yet unspecified crisis. But given that every conceivable DC villain lurks somewhere in the game code, writing down “Legion of Doom” in your item-spawning notebook would likely have interesting results.

So does adding adjectives, a returning feature. Just for laughs, we asked Arseneaux to spawn “zombie Batman” into that crowd of characters. Instant pandemonium. Dozens of heroes attacked with ’60s-style “BAM!” punches and energy blasts as the infection rapidly spread across the crowd. That “DC Zombies” moment alone was worth the price of admission.

As for how many characters you can have on-screen at once, “We haven’t found a limit just yet,” says Arseneaux. But he notes that on the PC version, “it’ll probably scale to your hardware capability.”

You don’t even need to rely on every DCU character ever made. The Scribblenauts item-creation tool returns with a hero creator attached, so you can invent your own. Arseneaux showed off a a mashup person made from Superman’s chest, Flash’s “wing” ears, and Aquaman’s arms. We also saw a designs that combined elements from past Scribblenauts games. Arseneaux wouldn’t go into much detail on the Hero Creator, but did say players would be able to add “many” powers to their original characters. 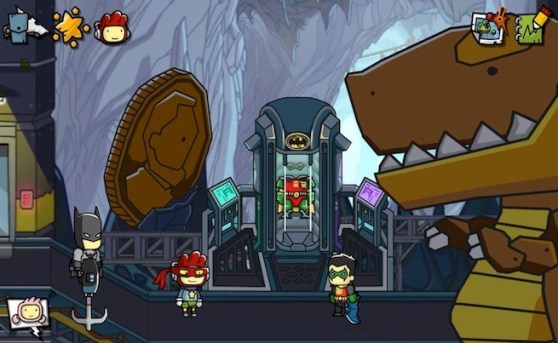 Unmasked also adds a new reputation system, where you earn points for completing dynamic feats around the level. Looking around on Oa, I saw someone calling out, “Rooster! I need a weapon!” while elsewhere, Cyborg shouted “I’m out of electricity! Shock me!” I didn’t get a chance to try it, but I’d bet anything “lightning gun” would’ve earned me some reputation in both cases. “You can spend that on a Batman costume for Maxwell, a new level, stuff like that,” says Arseneaux.

Now, it won’t be perfect. Unmasked won’t feature the Watchmen, for example, though it’s a sure bet the characters who inspired Alan Moore’s classic book (The Question, Blue Beatle, etc.) are in there. But we should finally get the definitive word on Batman vs. Superman … and more importantly, which among the dozens of versions on each side reigns supreme.