Scuti has launched its rewards-based gamers’ marketplace as well as its first network game, Rock Out from developer 20 Below Games.

Players will be able to purchase products directly from within their games using the Scuti marketplace, and they can earn rewards for every purchase.

Rock Out is the first of a series of rhythm games featuring rock, metal, and punk music by real bands. Players can choose single-player gameplay with leaderboards or turn-based multiplayer in a challenge mode. It’s free-to-play and available on iOS and Android.

“We’ve signed more than a dozen publishers and this is the first game that went live,” said Scuti CEO Nicholas Longano in an interview with GamesBeat. “Players are able to peruse products and start earning rewards. They can start using those rewards to buy more products down the road, or they can use those rewards for a number of different things.”

Below Games CEO Tony Shiff said in an interview with GamesBeat that he had considered doing rewards for gamers many years ago, but never got around to it. He said that Scuti offers an alternative monetization path for the studio that avoids spammy ads, which players hate.

“If we can get rid of intrusive ads, and make as much or more revenue utilizing Scuti, that’s a win-win for us and our players,” he said. “The barriers of the time when I tried earlier were too hard. I always thought it was a great idea and combine that with physical merch. And I just think it’s a terrific combination.”

Above: Scuti lets gamers buy from inside a game.

Scuti is also working with Reality Gaming Group to deliver a nonfungible token (NFT) marketplace through Scuti’s gCommerce platform. This enables game developers and publishers to sell their own NFTs inside the stores of their games.

The new NFT feature is an addition to Scuti‘s platform, which helps folks earn rewards while playing games and then use those rewards to buy real-world goods from a store embedded inside them.

Scuti’s founders believe that monetization is broken in games, as they say it annoys gamers. The popular forms of monetization in games today will slow players down by forcing them to grind. It puts paywalls in front of them, makes them watch video ads they don’t care about, or fools them into buying goods that don’t really have much value.

Over the next couple of weeks, the company will expand the marketplace from a couple of vendors to more than 40.

Above: Scuti puts a whole real-world e-commerce store in a game.

Shiff agrees that the ads are annoying.

“I’ve been involved in free to play games since I started. And I think the proliferation of ads is just crazy,” Shiff said. “As developers, you just have to hammer the user with ads, but I don’t like it. I don’t like having to do it. So if there a mechanism that can pay me as a developer, then I would love to take those ads out. I think it’s a good thing for the player.”

Scuti says that all game developers need to do for this tech to work is add the button; the company will handle the rest. It runs the store, purchasing, supply chain management, fulfillment, data, analytics, upselling, merchandising, promotions, and more. Players can hit the Scuti button and spend what they earn in-game on real-world merchandise, like a pair of shoes. Scuti shows them the stuff that the people say they like. And the rewards can be substantial, Longano said.

“If you buy a pair of Nike sneakers, you can now take the studio rewards and use those rewards to actually wager against other players. And that’s pretty nice,” Longano said.

Scuti creates a button in a corner of the game lobby or main menu, and it is passive, so that it doesn’t consume resources during gameplay. Players must opt-in to access the store and rewards, which it’s dubbed “Scutis.” The gamer can shop and stay inside the game’s lobby or main menu while doing so. The ads within the store are compliant with the Internet Advertising Bureau. 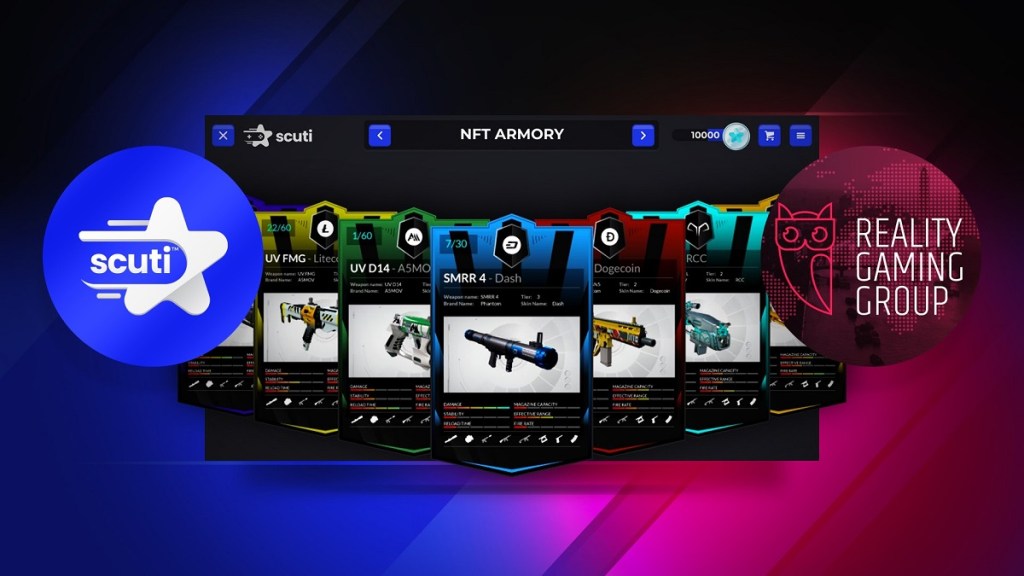 Above: Scuti and Reality Gaming Group are enabling devs to sell NFTs in their stores.

Scuti is a new retail channel with measurable attribution, activation and customer profile data. Brands can now access the “walled garden” of games, to reach and sell directly to players, Longano said. Players launch the Scuti store directly from their games, on any device they are playing. AI is used to make sure players see curated products that they may be interested in buying.

Scuti has jumped on the NFT bandwagon to allow game developers and publishers to tap directly into huge consumer demand for NFTs through its gCommerce SDK, giving players the capability to own, sell and trade digital assets. NFTs have exploded in other applications such as art, sports collectibles, and music. NBA Top Shot (a digital take on collectible basketball cards) is one example. Built by Dapper Labs, NBA Top Shot has surpassed $750 million in sales, just six months after going public. And an NFT digital collage by the artist Beeple sold at Christie’s for $69.3 million. Gaming has a couple of new unicorns, or startups valued at $1 billion, in Animoca Brands and Forte. NFTs are now selling at a rate of $828 million a month, well above the levels at the previous peak in May.

Rock Out lets players play the drums or guitar with multiple levels of difficulty. It features music by The Dead Daisies, OK Set, Feverwar, Jim Donovan & the Sun King Warriors, and more.

Shiff started 20 Below Games when he moved to Canada from California a few years ago. The focus is on music games, as he thinks the music industry is underserved.