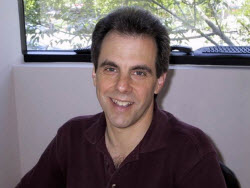 The process of making games today is far different from what it was a few decades ago. Owen Rubin (pictured right) said that when he joined Atari in 1976 as one of the first programmers, he had to work with teletypes, oscilloscopes, and circuit boards to “program” his arcade machine.

“I did everything by hand,” Rubin said. “To make sound of a splat, I had to record the sound as I dropped wet towels into a shower. We were making it up as we went.”

Rubin learned what he had to and soon was creating one game after another, including Space Duel and Major Havoc. He left in 1984 and went to work at Apple and a variety of other companies. All the while, he stayed in touch with his Atari friends. When Blackley approached him, Rubin jumped at the chance to “reinvent games.”

Rotberg worked at Atari’s coin-op division from 1979 to 1981, and then he came back for a second stint from 1986 to 1991. He made everything from a baseball game to Battlezone, which used cool 3D vector graphics and turned into a runaway hit. He went on to work at Apple, 3DO, Sente, and Silicon Entertainment. He moved to Grass Valley, Calif. and then started consulting on entertainment projects.

“Games are in my blood,” said Rotberg, who serves as Innovative Leisure’s chief technology officer. “What’s interesting to me now is that the smaller-scale games work for mobile devices. This isn’t something that takes hundreds of people and tens of millions of dollars. Instead, it is remarkably similar to what we did in an earlier age.”

“We have tried to recreate the environment at Atari, where we would wander into each other’s labs and share invaluable input,” Rotberg said. “That’s what we do now, and I have to say I learn from the interns. But we saw an instance where an intern’s code failed. None of us older guys would have made that mistake because we can think about it at the machine level. It’s a crap shoot. But Seamus has put together what was the single most talented group of people that I have had the fortune to work with. I am having a blast for the first time in a long time.” 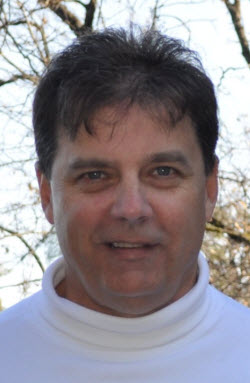 Rich Adam (pictured right), feels the same way. He started at Atari to work on pinball machines. By the time he left in 1983, he had worked on Missile Command with Dave Theurer and did the design for Star Wars: The Empire Strikes Back. He went on to work at Bally Sente, Electronic Arts (where he created the first PGA Tour golf games), Interactive Network, and Silicon Entertainment, then he went on to become a consultant.

“It is funny how the market has come all the way around to return to the arcade experience,” Adam said. “People are playing in a more casual manner again.”

Adam also cherished the collaborative environment at Atari. When he heard what Blackley had in mind, he thought it was a great idea to bring back “the best engineering group I ever worked with.”

“It was hard to get your shit done because others came in,” he said. “But they would come in and give counsel. We had this downtime as we waited to get our code back. So we would graze the labs and see what others were doing.”

Today, making games is different. “In the old days, it was assembly code,” Adam said. “Today, you have tools that can get your concepts into playable fashion much more quickly. But we still have one thing in common. We are in the novelty business, where it has to be original. It is hard to be novel now. The Zyngas of the world want to throw out something quickly or copy it. We’ll take our time and work longer to do it right.”

Blackley says the games will start coming out this summer on the iPhone and iPad. The company will market them and rely on help from THQ to get the word out, but the expectation is they will take off because they have “awesome gameplay.”

“They’re all playable and awesome,” he said. “More ideas are coming up from the old guys and the new guys. We want to have a string of really innovative games.”