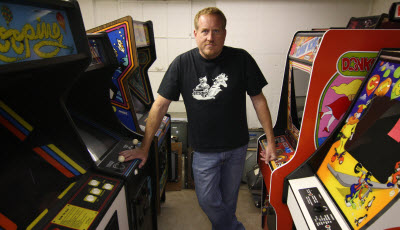 Question from audience: Do you think that Google missed the boat by not making a Google TV that was more like Ouya’s, focused around games? They’ve been struggling with Google TV, they must look at Ouya and think, why didn’t I just do that?

Blackley: Well, I think a lot of companies… The thing that’s great about Kickstarter, aside from the fact that it’s given a lot of cool people a lot of money, is that it’s such a demonstration of the almost frustrated, pent-up consumer demand for this content. I always used to say, when I was doing press stuff for Xbox, that games would have made it if games were covered in entertainment, as opposed to being covered in tech, in places like the New York Times. And then they went and did it. It destroyed my whole awesome line. But that overarching point there is that a lot of companies like the New York Times, media outlets, or Google or Apple, have had a really hard time getting their head around, for some reason, games being legitimate. A lot of people have missed tremendous business opportunities in giving people the ability to play games on platforms that are in front of them all the time. You watch, now… In various places where you can play games on Google, it spikes and takes off. The demand was always there and many boats were missed. It’s not just Google, it’s a lot of them. Heck, it’s Microsoft. Sony missed the boat a couple of times before they started the PlayStation. Everybody looks back now at Sony being prescient, they weren’t, they missed it a couple of times. It’s hard, I think, for people who come from the generation before the video game generation to imagine just how powerful and important this is in people’s lives. Now it’s a little more evident.

Question: You’ve obviously spent your career on the sort of fault line between the Hollywood entertainment world and the gaming world. Where are areas where you see those worlds kind of converging, and where is there still a divide?

Blackley: Traditionally, the place where the two businesses converge has probably been the display device, the living room. Almost nowhere else in between. We’ve never really seen a cultural match between the old-school entertainment business and what’s going on in games. It’s very similar to the cultural mismatch we’ve seen between Hollywood and the technology business. Even now, with the way that the music business works, there’s still an uneasiness between the northern California culture and the southern California culture of music. It’s a completely different approach. One approach comes from an audience that is natively digital, that is hugely respectful of a certain way of doing business and a certain amount of openness and a certain amount of sharing. And another business that is completely built around technology that offered a different kind of control. I still don’t see any of that coming together. Really. I don’t. At some point, though, just like with everything else related to games, the population ages enough that everybody who is in a management position at any company of note will have grown up as a gamer. When that happens there’s going to be a necessary and obvious convergence. It’s happening now at the studios, you’re seeing executives who grew up as gamers, who are starting to take games really seriously. Not in an exploitative way, like “Let’s make an Asteroids movie!”, but in a way that’s much more serious and probably more respectful to the game audience. Ultimately, they’ll be more successful.