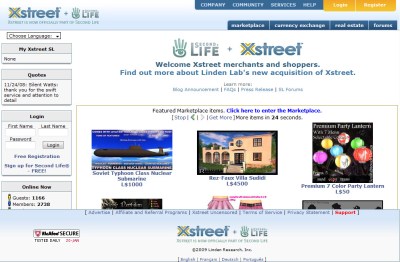 Diving into one of the hot business models for virtual labs, Linden Lab said today it has acquired two virtual goods markets that sell items for the denizens of its Second Life virtual world.

Linden Lab has bought Xstreet SL and OnRez, two burgeoning online markets that sell hundreds of thousands of virtual goods to Second Life players, including clothes and accessories for their virtual characters, property and surroundings.

Tom Hale, a spokesman for Linden Lab, said the deals will allow Second Life to move forward in enhancing its e-commerce business by offering one-stop shopping that can serve both the merchants who create the digital goods and the members who buy them.

Virtual goods have expanded to become a $1.5 billion market, but Second Life was engineered in the days before the business model was fully proven. Linden Lab residents exchanged more than $360 million worth of virtual goods and services in 2008, making the virtual economy and the ability to make a living one of the big draws of the virtual world. Top merchants in Second Life have made more than $500,000 in real money in 2008. 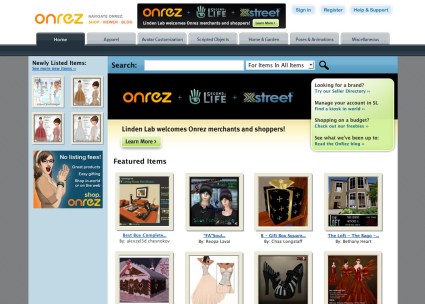 The sites are similar to real-world auction sites such as eBay or Amazon. Xstreet SL, which OnRez will be integrated into, lets people browse, purchase, and sell Second Life virtual goods via a web site. The members can then log into the virtual world and pick up their purchases at a virtual store. Right now, there are more than 680,000 Second Life goods listed for sale online. The most common items are apparel, animations, vehicles, buildings and furniture.

Mark Kingdon, chief executive of Linden Lab in San Francisco, said that the deals will make it easier for Second Life residents to make a living selling their wares. The ability to create these goods is one of the things that sets Second Life apart from it competitors, though there are also plenty of rivals, such as IMVU, that offer similar economic opportunities for members. Linden Lab was founded in 1999. Second Life has 16.7 million registered users; of those, 940,000 have logged in during the past 30 days.