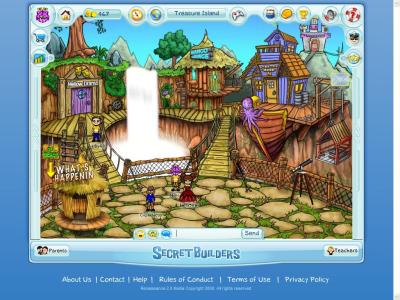 Secret Builders is announcing today an online virtual world with educational games for children. In doing so, it joins a bunch of rivals going after the kids online game market, from Zookazoo to Club Penguin.

This world lets kids create two-dimensional avatars, or virtual characters, and play about 30 different mini-games spread throughout the different territories of the site. The games are entertaining but don’t necessarily stand out from other Flash-based online sites for kids. And the art style isn’t anything special for those who have toyed with Webkinz or Neopets.

The company hopes to differentiate itself by weaving themes of creativity and cultural literacy into the games. Kids can stumble upon art, science and math facts built into the site’s images and games. You can run into Galileo, Shakespeare or Lewis Carroll. The Flash-based site includes popular art and writing contests, a kids magazine and room-building tools. Secret Builders is aimed at elementary and middle school kids.

Game sites for this demographic are popular right now, particularly since Disney bought Club Penguin last year for $700 million. eMarketer predicts that 53 percent of kids will be part of some kind of virtual world by 2011. So Secret Builders is going to face a lot of competition in a fast-growing market.

It seems like age eight is the right target for Secret Builders. Everything on the site is focused on fun first, not education. But the integration of the learning elements can be clever. Kids can paint black-and-white pictures by pointing a paint brush with the mouse cursor. They may not know it, but they will be painting over a famous piece by a well-known artist. 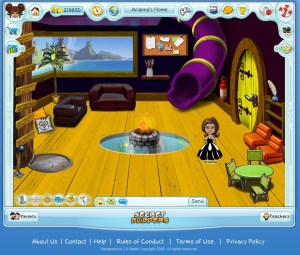 On Dec. 10, Secret Builders is launching a “Dear Mr. President” contest, in which players submit a photo and extended caption addressed to president-elect Barack Obama about an issue important to them. Arianna Huffington (her avatar, to the left) has agreed to publish the winning submission on The Huffington Post on President’s Day.

The site is the inspiration of Umair Khan, who founded the Menlo Park, Calif.-based company in January 2007. He has a team of seven in the U.S. and 14 programmers in Bulgaria. After a couple of months of testing, the site has 5,000 members in 27 countries — all through word of mouth.

Khan was a math teacher before he went back to school at MIT, where he enjoyed associating with creative writers and literature majors. He became an entrepreneur, but after he got married and raised three kids, he decided to focus on ways to promote creativity for children. The idea is to make literature and other educational topics come alive through virtual worlds. The first time your kid hears about King Lear might be through a cartoon character in Secret Builders, Khan said.

In this way, the site is built to reassure parents, who can take heart that their kids are learning something while goofing off on the site. But he adds, “The idea is not to give kids chocolate-covered broccoli.” 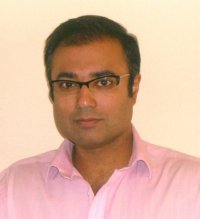 They can chat with each other, but they can’t type naughty words. Anything that they submit — including essays — goes into a queue and is read by a human moderator before it is posted. That will certainly slow down communication as the site grows, but it’s a pretty solid way to filter out inappropriate material.

Membership is free now, but the site will introduce premium subscriptions over time and let members use real money to buy virtual goods. It’s not clear to me that a site like this one, without a big investor or mothership, is going to stand out. It’s good that Secret Builders is trying to shoot for something that parents will prefer over sites that have no educational value. But it could be hard to convince anyone to pay for it when there are so many free sites out there. Another direct competitor coming soon is Knowledge Adventure, which is making a kids online world based on its educational game brand.

Khan said that the company is open to product placement and advertising, but in some circles targeting kids with ads is frowned upon. Still, the site has created joint activities with Art in Action, the Monterey Bay Aquarium, WildPlanet Toy Company and StoneSoup Magazine.

Khan has raised $2.4 million in two rounds of funding from prominent angel investors including Scott Hassan, co-founder of eGroups and founding team member at Google, Carlos Cashman, founder and CEO of CourseAdvisors, and Ken Morse, a professor at the MIT Sloan School and co-founder of 3Com and Aspen Technologies. Secret Builders isn’t actively raising more.