Old tabletop game properties are enjoying a renaissance right now. Designers are dragging franchises such as Magic: The Gathering, Talisman, and Ogre out of the ‘90s and doing something new, whether that’s a new implementation of an old game or a new way of experiencing these worlds. This resurgence of interest in legacy tabletop games is felt across multiple mediums, whether they be in the tabletop realm or branching out into video games, and it’s shown no signs of slowing down.

That’s what Justin Reynard is banking on as he brings back Doomtrooper, a collectable card game set in the Mutant Chronicles universe. Reynard, who’s worked on the likes of Fallout: New Vegas, Alpha Protocol, and Dungeon Siege III, brought together a small team and sought out the rights to make a new digital version of Doomtrooper, with the goal of bringing the game he loves to digital, online platforms. Talking to Reynard reveals how much of a passion project this is, but also illuminates why these old tabletop franchises are going to keep popping up.

Released in 1995, Doomtrooper was a CCG spinoff of the Mutant Chronicles pen-and-paper RPG, a setting that mixed futuristic space-faring cyberpunk with post-apocalyptic mutant cults. It only lasted a about two years, with its last expansion, Paradise Lost, releasing in 1997, but it built a cult following in that short amount of time. Reynard was one of the people enamored by the game and setting.

“So myself, it was the art style,” Reynard responded when asked what attracted him to Doomtrooper in the first place. “So back in the day when I was 13, anything that was futuristic or scary or demonic — kids are drawn to that stuff I guess — I played Magic already and wizards and stuff have always been something that is fun, but when I saw I could do space and aliens and military stuff, it just drew me in more.”

Reynard makes it clear that leaning on nostalgia is a balancing act. “There’s a lot of people who  tackle the card game reboots from the wrong angle,” he said. “They tackle it from the nostalgia angle or the fresh angle, but they don’t really think about both sides of the coin. And I’d like to think that we’re doing our best to do that.” An example of this is the approach his team is taking with regards to the card art. “We’ve had some of the old fans complain, you know, they want the cards to look exactly like they did back in the day, and I can respect that, but I believe the font is either Times New Roman or, like, one step away from that on the old cards. You can’t put out a game these days with Times New Roman font.”

This philosophy even extends to the core gameplay. Reynard and his team aren’t content with simply reproducing the game, but rather improving it with all the lessons card game designers have learned over the years. “The original designer, we met with him, his name’s Brian Winter, and we said, hey, we’re going to make a digital version of Doomtrooper,” Reynard explained. “And he just said how a physical game, if they made a mistake, all they could do is make more powerful cards later to counteract the mistakes. They couldn’t go back and say like “Oh change this card”, ’cause nobody would do it. You gotta read what the card says. So with the digital game and the chance to start from scratch, he had a bunch of things to simplify the rules. So it still plays very much the same, but we changed around the edges to make sure that it’s a little more balanced and a little more playable.” 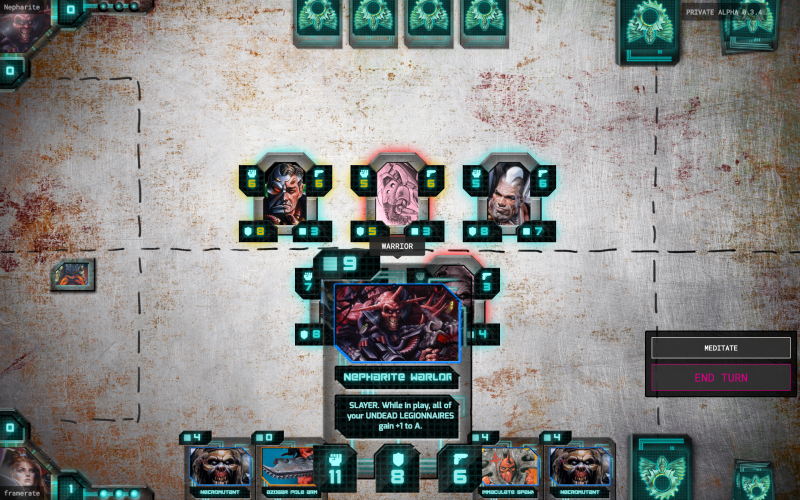 Above: The user interface for Doomtrooper matches the grim tone of the game itself.

Doomtrooper takes few cues from the current crop of digital card games as far as monetization is concerned, but Reynard wants it to be a light touch. “One thing that a lot of games do, like the mobile games and the free-to-play games, is they offer like a hundred different types of currency, and I’ve always kind of disliked that: You get this currency for winning matches, you get this currency for real money, you get this currency for whatever,” Reynard said. “The plan has always been to have three types of currency: real money, which may have to be converted to the second type, cardinal’s coins, which is the currency of the Mutant Chronicles universe, and then the third one would be whatever the crafting material’s final name is, like Hearthstone’s dust or whatever, which is what you would use to create new cards when you destroy old cards that you don’t want anymore. So I don’t want to get it where it’s super complicated where you can buy a pack for 10 diamonds or 50 rubies or a hundred gemstone coins, like, I just like it to be, here’s the price, here’s the currency, go wild.”

The more Reynard talks about his Doomtrooper reboot, the more it sounds like he wants to recreate the experience of playing in a game store, complete with promotional items. “In our packs, you also get, we haven’t decided the official name yet, but we’ve been calling it the bubblegum system, because when I was growing up, you could buy baseball cards with a gross piece of gum in the back, so we’ve always called it that because what we want is, when you get your cards when you buy a pack of Doomtrooper, but you also get something extra in every pack, and the something extra can be cosmetic items like an avatar, a title for your profile, a card back that’s super rare, or it could be in-game currency, a variant card with different or shiny art or whatever, or it could be an additional pack.”

What Doomtrooper shows is the cyclical nature of these older tabletop properties. “I realized when we were at Rooster Teeth Expo that there was this kid named Colby. He came up and he played our demo that was in early alpha, and he came up and he was like, I really like this game!” Reynard recounted. “And I was like, how old are you? and he was 20, and I realized that 20 years ago, I was playing Doomtrooper. The guy who owns Doomtrooper is, I don’t know, 10, 20 years older than me, and then Colby is like 15, 20 years younger than me, so basically there’s this circular pattern where the guys who created Doomtrooper, I played it when I was a kid, and as when I got how old they were when they made it, now I’m old enough to make something and I’m making it for someone who was as young as I was when I was playing it.”

More than anything, Reynard want to capture and revitalize the sense of community around the game. “At its core, these types of games I think are very social games where you play with your friends and then maybe play a tournament competitively every now and then, but I like the ability to keep in touch with people, and some of my best friends I’ve made online, and if I could capture one thing with this game, I think it would be that sense of community, that sense of people that are passionate about this game hanging out together and enjoying it.”