Sega’s Crazy Taxi: City Rush, a reimagining of an old console game, reached the No. 1 worldwide rank on top iOS game downloads for the month of August, according to market analyst firm App Annie. The results from the rankings show there are still many different strategies that game companies can pursue as they make their way to the top of the mobile charts.

Sega tapped the original Crazy Taxi creator Kenji Kanno and Sega mobile developer Hardlight Studios to recreate Crazy Taxi, where you drive like a crazy person to rake in the fares and get to your destinations on time. Introduced on July 31, the polished app introduced a 15-year-old franchise to a new generation of mobile gamers across a bunch of countries.

Future Games of London took advantage of the Discovery Channel’s Shark Week in the U.S. to update its Hungry Shark Evolution game, a move that allowed it to break into the top 10 global downloads.

Meanwhile, King crushed it in China, as Tencent’s localized version of Candy Crush Saga performed well on Tencent’s Mobile QQ and Weixing social networks. That pushed Candy Crush Saga back into the top-10 worldwide download charts. That’s a pretty quick result, as King and Tencent only signed a deal to bring the game to China in April. Tencent and CJ Netmarble also had a hit with Everybody’s Marble, which is integrated into the mobile messaging networks Line, KakaoTalk, and WeChat.

Gameloft also scored with its movie-based Despicable Me game. In late July, it introduced “the Jelly Lab,” enabling the app to grab the No. 4 slot in combined worldwide download charts.

Japan’s SoftBank also had a big month. In August, SoftBank secured a majority stake in the voting stock for Supercell, creator of the No. 1-ranked Clash of Clans (in revenues). Supercell’s Boom Beach also rose in the iOS download charts in August, thanks to a new update.

On Google Play, the Guitar Hero clone Rock Hero rose to No. 4 in the charts in worldwide downloads. The Android game was most popular in the U.S., Brazil, and Mexico. The game was published by Guitar & Music Games.

Disney and Tab Tale moved up in the ranks of downloads with kid-focused mobile games in August. Disney got a boost from the release of Kitchen Scramble, in which players run their own food trucks. Tab Tale broke into the top ten on iOS with its Airheads Jump platformer game.

Dong Nguyen also scored another hit, following up on his Flappy Bird smash hit. HIs dotGears Studios launched Swing Copters on iOS and Google Play in the second half of the month. It hit No. 4 for the month in worldwide iOS downloads.

And Peter Molyneux of 22cans had a good launch of Godus, a new god genre game published by DeNA on iOS. The simulation adventure game broke into the top 10. 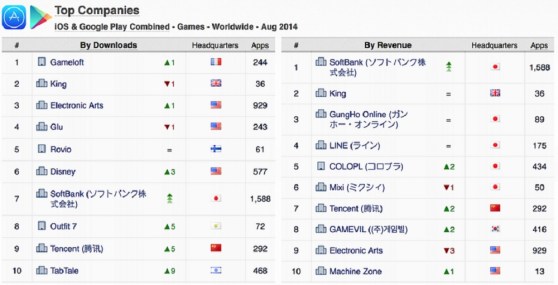