Sega Europe said that its The Creative Assembly studio will launch Total War: Warhammer III later on this year in partnership with franchise owner Games Workshop.

The title is the latest in the Total War series that has sold more than 34.3 million copies to date, and it is the third in the series of Warhammer games set in a cataclysmic conflict between demonic powers and the sentinels of the mortal world. I played the first two games, and many others, in the Total War series.

The Creative Assembly has been making Total War strategy games for more than two decades. Most of these have been focused on historical wars, until recently, when they’ve expanded into myths such as Total War: Three Kingdoms and fantasy with the Warhammer titles. In a Total War strategy game, you move armies around on a strategic map and fight in a 3D real-time battle when they meet on the battlefield.

In Total War: Warhammer III, each choice the player makes will shape the conflict to come. You’ll explore the mysterious Lands of the East to the demon-infested Realms of Chaos. The studio promises strategy gaming on a scale yet unseen in this epic culmination to the Total War: Warhammer trilogy.

The game will have iconic races from the World of Warhammer Fantasy Battles, including the video game debut of Kislev and Cathay alongside the factions of Chaos — Khorne, Nurgle, Slaanesh, and Tzeentch — players will wage war with the most diverse array of legendary heroes, gargantuan monsters, flying creatures, and magical powers. 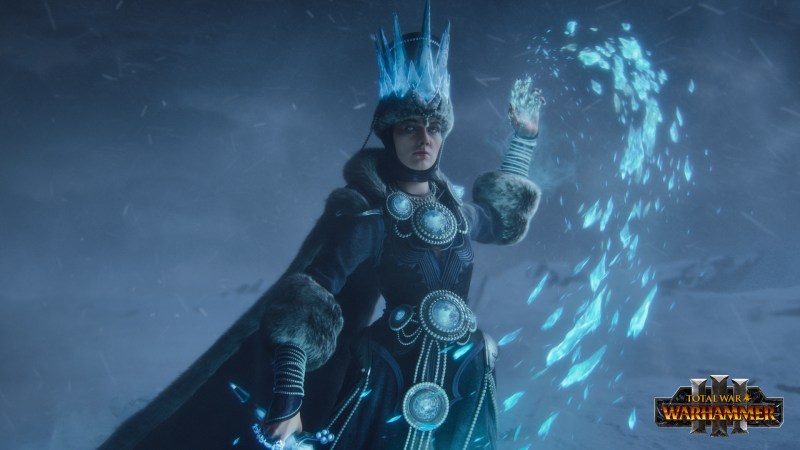 Above: A leader in Total War: Warhammer III.

“Our vision, from the start, was to create a series that felt like an incredible journey through this world we all loved,” said game director Ian Roxburgh, in a statement. “The enormous support of our players in ensuring the success of the first two installments has pushed our ambition to new heights, and we can’t wait for everyone to experience it.”

Embarking on a new grand campaign, you will be tasked with saving or exploiting the power of a dying god. Each race offers a unique journey through the nightmarish Chaos Realm. The endgame will determine the fate of the world.