Judging by the flood of memes on Twitter about Nintendo’s Animal Crossing: Pocket Camp, it’s no surprise to hear that it had a successful launch. In the first six days, it’s been downloaded at least 15 million times from the Apple App Store and Google Play, according to market analyst Sensor Tower. That puts it ahead of Fire Emblem: Heroes, though it’s behind Super Mario Run, which drew 32 million downloads in its first six days.

Pocket Camp is based on the popular Animal Crossing series, which has sold over 30 million games since its 2001 debut. Players create personalized camp sites and can build more furniture by leveling up and collecting crafting ingredients. It’s a social game that rewards daily logins and adding people as friends, and a big part of the gameplay is befriending animals in the world by gifting them with items like fruit, bugs, and fish. The in-game currency is bells, but some items and areas must be purchased using Leaf Tickets. Players can earn these by completing quests or using real-world money. 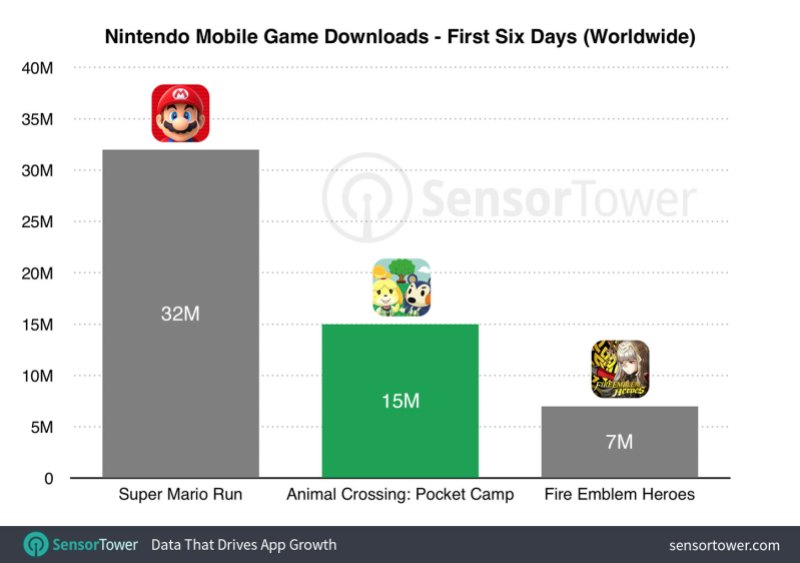 Nintendo has been trying to grab a spot in the lucrative mobile games market, which is estimated to grow to $65 billion in 2020. Its first title, Super Mario Run, has now hit 200 million downloads since its debut in December 2016. Even though only 4 percent of folks opt to pay the $10 price to unlock the full game, its numbers look impressive and it generated $8.4 million on its first day. Nintendo’s second title Fire Emblem: Heroes was free to play with microtransactions, and it pulled in $2.9 million on day one.

The exact numbers aren’t out yet on how Pocket Camp’s microtransactions have fared. However, Sensor Tower reports that it’s No. 10 on the Apple App Store’s top-grossing chart in Japan. It’s lagging behind in the U.S., where it sits at No. 72, but the download numbers look promising.

“Animal Crossing: Pocket Camp is yet another example of the Nintendo brand’s power to drive massive adoption out of the gate on mobile, even without the huge marketing push that Super Mario Run received,” said Sensor Tower analyst Ruika Lin. “The Animal Crossing franchise has historically had the wider draw on consoles and handhelds when compared to the more hardcore Fire Emblem series, and we’re now seeing that echoed on the App Store and Google Play.”