Epic Games’s Fortnite: Battle Royale has earned over $15 million from in-app purchases in its first month, according to market researcher Sensor Tower. The free-to-play game has been downloaded over 11 million times worldwide, and it’s now ranked No. 1 in the Apple App Store.

After an invite-only launch in mid-March, Epic opened up its shooter sensation to all iOS players on Monday. As soon as it did, Sensor Tower reports that its daily revenue tripled as compared to the previous week. Players spent $1.8 million on that day alone, whereas the game was generating an average of $620,000 per day during the invite-only beta.

“The sharp increase in revenue is largely the result of new players entering the game’s mobile ecosystem, but we’d already seen a steady increase in mobile spending leading up to the invite system’s removal,” said Sensor Tower head of mobile insights Randy Nelson. “That can be traced in part to Epic Games experimenting with promotions such as the starter pack.”

In the last week, Fortnite generated $6.4 million, which outpaced the spending in top earners like King’s Candy Crush Saga and Supercell’s Clash of Clans, both top-grossing titles in 2017. And it’s only available on iOS devices. Once an Android version launches, Nelson predicts that will “at least double the player base.”

“We think it’s perfectly reasonable to expect the game to continue as a top earner on mobile and consistently gross well over $1 million per day once it’s available on both platforms,” said Nelson. 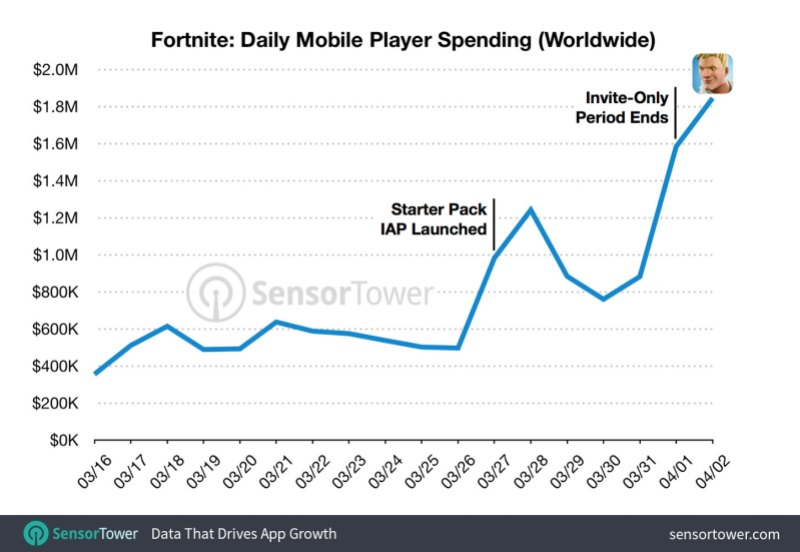 However, as in all things last-player-standing, Fortnite isn’t going to go unchallenged for the top spot. It’s been jostling for the position with its rival PUBG Mobile, which is available on both the Apple App Store and Google Play. Sensor Tower estimates that over 14 million players have installed it on iOS devices, so it certainly has the numbers. Developer PUBG Corp. and publisher Tencent haven’t enabled in-app purchases yet, and once they do, it could generate a lot of chicken dinners’ worth of revenue.

Fortnite does have a secret weapon that might enable it to stay on top:

“Also worth noting is the fact that we could be seeing the effect of the fact that [Fortnite] is not only ‘cross play’ but also ‘cross buy,’ in that players can use items purchases via the mobile version on PC and console,” said Nelson. “This is another unique aspect of the game and you can imagine players purchasing the latest special outfits on the go so they can use them later no matter where they choose to play.”