Epic Games’ Fortnite: Battle Royale mobile isn’t just grabbing players’ attention — it also has them reaching for their wallets. In its first month, it has now earned $25 million, according to market analyst Sensor Tower. And that’s only on iOS devices; once it launches on Android, the researcher estimates that the last player-standing shooter could rake in over $500 million this year.

Fortnite has enjoyed an explosion of popularity since launching on iOS devices in mid-March. Once it opened it up from invite-only to all players, its daily revenues immediately tripled. Though the game is free-to-play, it features in-app purchases for cosmetic items like new characters, skins, and emotes. People can also purchase Battle Passes to level up faster and earn more in-game items.

Sensor Tower found that in the first half of April, it was the second highest-earning app on the Apple App Store. That put it ahead of perennial top-grossing games like King’s Candy Crush Saga and the dating app Tinder. 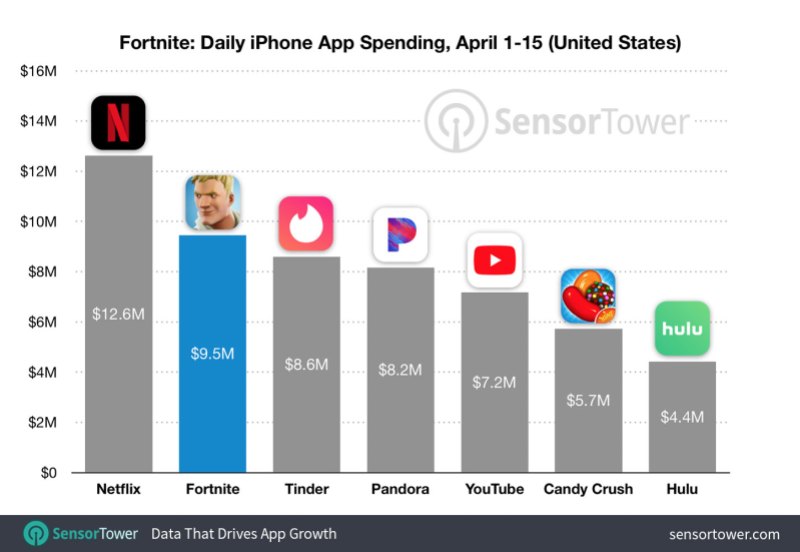 A huge perk for Fortnite players is its cross-platform play — items purchased are available whether they’re playing on PC, Xbox One, PlayStation 4, or iOS, and the matchmaking goes across platforms as well.

Epic’s battle royale title has been doing well on consoles. In February, it drove the 359 percent year-over-year growth in the free-to-play console game category. And as of February, it beat out PUBG Corp.’s rival, PlayerUnknown’s Battlegrounds, as the top game in that genre everywhere except for China, according to market analyst Newzoo.

It’s so popular that it experienced server outages last week, which frustrated its millions of players. To make up for that, Epic is offering free in-game items to like gold and cosmetics.