According to the mobile data and insights company Sensor Tower, Hearthstone’s Kobolds & Catacombs expansion has doubled the digital card game’s mobile revenues in the five-day period after its launch on December 7. This is compared to the five days before launch.

Hearthstone is a free-to-play game that’s also available on PC. It makes money by selling digital card packs along with a handful of cosmetic skins. Expansions add new cards (typically, 135 of them), which helps drive pack sales.

Kobolds & Catacomb’s postlaunch growth is less than what Hearthstone experienced after the releases of 2017’s other two expansions: Journey to Un’Goro and Knights of the Frozen Throne. We’ve reached out to Blizzard for comment and confirmation on Sensor Tower’s data and will update this story if it responds. 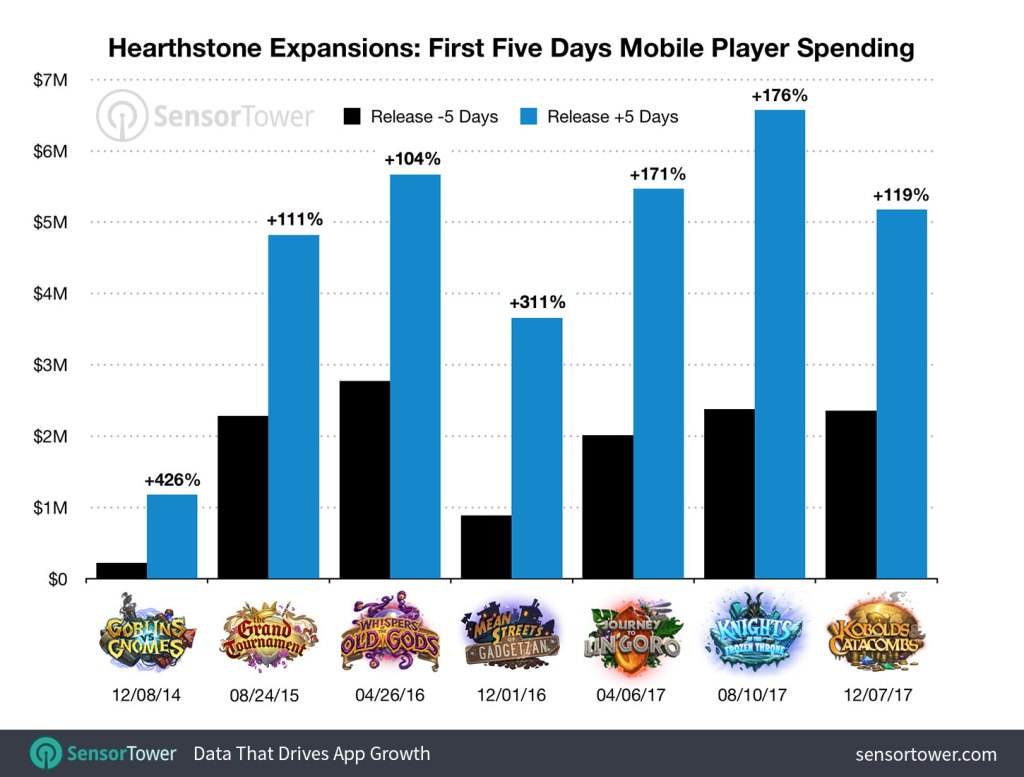 Above: Via Sensor Tower.

Kobolds & Catacombs compares more favorably to last year’s December expansion, Mean Streets of Gadgetzan. That brought in below $4 million, while the new set reached just about $5 million. The last expansion of the year can be a trickier sell for Blizzard. The first starts a new Standard rotation, meaning that cards from older sets become ineligible in many of Hearthstone’s most popular play modes. At that point, it’s easier for new players to get into the game, since they don’t need as big of a card collection to compete.

On the other side, now is a harder time for new players to get into Hearthstone. If you want to build a strong deck, you’ll often need cards from the original set and the last five expansions (and also the One Night in Karazhan adventure). Some players try to subvert this by making “cheap” decks that require as few expansion cards as possible. Some of these budget decks can perform well. And some decks remain viable without the new cards.