Mobile spending was up across the board globally in 2017 mostly due to games. Total app spend was up 35 percent year-over-year, reaching $58.6 billion on the Apple App Store and Google Play according to mobile market analyst Sensor Tower. The bulk of that was from mobile games, which accounted for 82 percent of all revenue and rose 30 percent year-over-year to reach $48.3 billion.

The top-grossing title worldwide on the Apple App Store and Google Play was Mixi Inc.’s Monster Strike. It launched in 2013 and amassed a dedicated fanbase in Japan but had trouble gaining traction abroad, which makes it even more impressive that it topped the charts last year. Sensor Tower notes that its numbers don’t account for China’s Android app stores, which is the likely reason that Tencent’s massively popular Honor of Kings places at No. 2 instead of No. 1. Other top titles include Aniplex’s Fate/Grand Order, Supercell’s Clash Royale, and King’s Candy Crush Saga.

The U.S. market is still riding the sugar high — Candy Crush Saga came in at the No. 1 spot for top grossing title, even though the game debuted five years ago in 2012. MZ’s Game of War and Supercell’s Clash of Clans took the No. 2 and No. 3 spots and have also been around for a while, debuting in 2013 and 2012 respectively. At No. 4 and No. 5 are more recent big earners, MZ’s Mobile Strike from 2015, and Clash Royale from 2016. 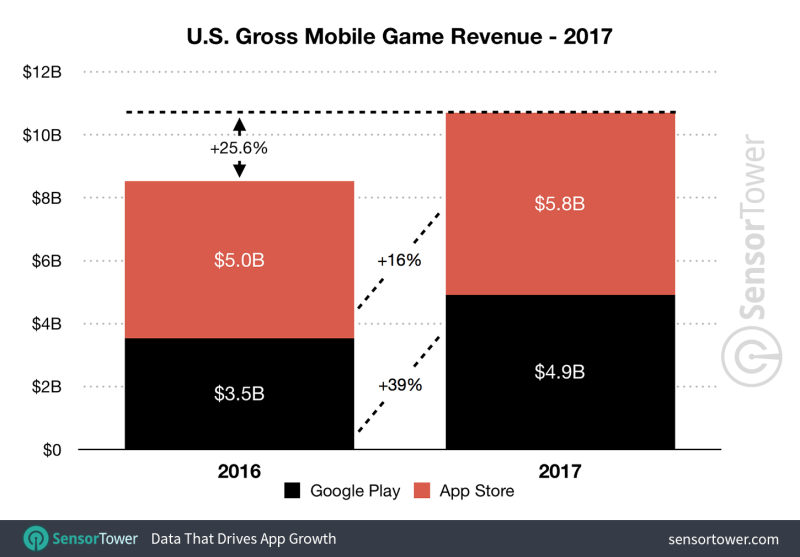 In the U.S., mobile games earned $10.7 billion, up 25.6 percent year-over-year. This accounted for 74 percent of the $14.4 billion total spend on apps, which is actually down year-over-year. In 2016, games made up 79 percent of app revenues. Sensor Tower suggests that this decrease is because users are spending more on other mobile entertainment like the video-streaming HBO Now app.

Mobile games passed a milestone last year, earning more revenue than PC and console titles for the first time ever. The game industry overall is growing quite briskly — so much so that market researcher Newzoo revised its previous estimates from $108.9 billion to $116 billion for overall revenue in 2017. And this year we may see even bigger numbers as some mobile giants expand their domains. Tencent launched its multiplayer online battle arena Arena of Valor in North America and Europe in December 2017, a mobile juggernaut that attracts over 80 million daily active users.