Few video game characters are as popular as Pikachu, Pokémon’s mascot. I say “few” because of Mario.

It took Super Mario Run only four days to reach 25 million downloads on iOS, according to app-intelligence firm Sensor Tower. That’s a new record. In July, it took Pokémon Go 11 days to reach that same milestone following its launch. This demonstrates the power that Nintendo’s brands can have in the $36.6 billion mobile gaming market.

Super Mario Run debuted on Thursday, and it quickly grossed approximately $5 million in its first day on five million downloads. What’s impressive about these numbers is that, for now, Nintendo’s jumping Italian plumber is only on Apple devices. When developer Niantic launched Pokémon Go in the summer, it released the app on both iOS and Android. So when that game reached 25 million downloads in 11 days, it did so on multiple platforms. Unlike the pocket monster-catching game, Super Mario Run had a worldwide iOS release while Pokémon Go slowly rolled out a couple of countries at a time. 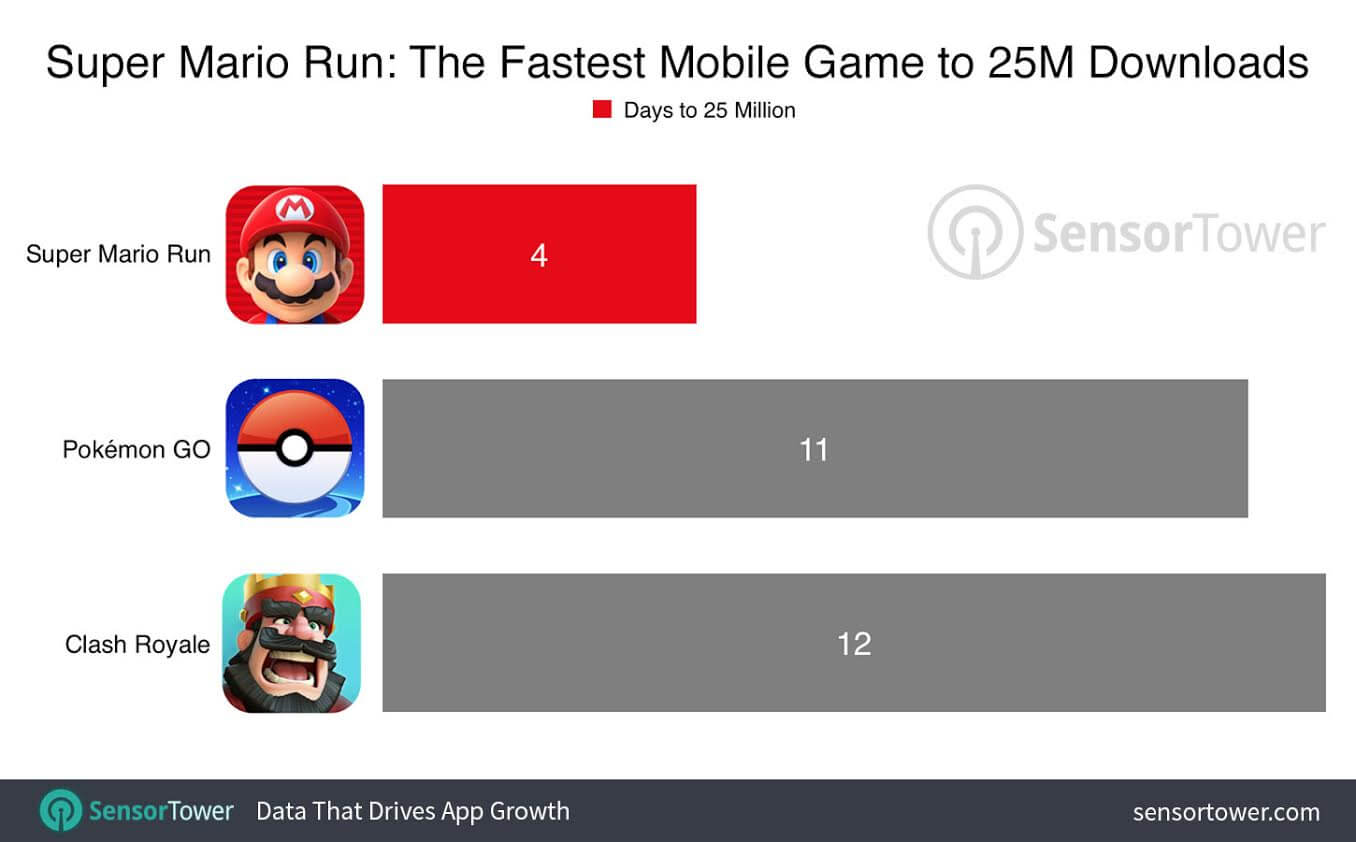 On top of Mario’s download numbers, Sensor Tower estimates that Mario on iOS has generated more than $21 million in revenues during its first four days. That’s an impressive number for a mobile app that does not have microtransactions that enable players to spend hundreds or thousands of dollars. Instead, you can play the first three stages for free, and then you have to make a one-time $10 purchase to unlock the rest of the game’s content. As of now, it looks like plenty of iPhone owners are doing just that.

Nintendo will likely hit a wall once it saturates the iOS market. Once it can no longer find anyone to download the game that owns an iPhone, it will likely have to shake things up by introducing something new to convince more people to spend money. That could take the form of a price cut, which is something Nintendo doesn’t do a whole lot with its traditional gaming software. Or the company could release new content designed to appeal specifically to people who didn’t buy the full game the first time around. Personally, I’m hoping the publisher releases a skin pack that makes the game look like the original 8-bit Super Mario Bros.

Of course, Nintendo still plans to launch Super Mario Run on Android, and that should help it see a second huge wave of downloads and spending.