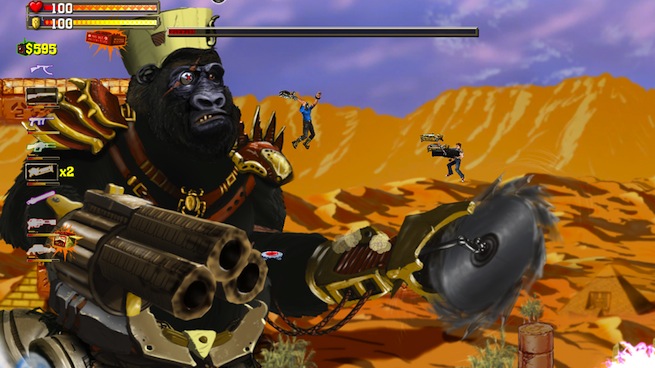 Serious Sam Double D XXL, coming out on Wednesday for Xbox Live Arcade, is a port of last year’s PC release Serious Sam Double D. The “Double D” refers to the fact that it’s a 2D side-scroller instead of a first-person shooter and isn’t a low-brow reference to breasts at all. OK, maybe that’s just wishful thinking/willful ignorance on my part, but even if you’re not into puerile double entendres, you shouldn’t let that stop you from trying this one out.

Developer Mommy’s Best Games (the creators of other crazy bullet-fests like Weapon of Choice and Shoot 1UP) made Double D/XXL as part of franchise owner Croteam’s Serious Sam Indie Series, but it fits right in with the company’s other work even without the Serious Sam stamp on it.

It depends on what you’re into, really

How you feel about XXL largely depends on your attitude toward doing things like fighting carnivorous worms inside a hollowed-out dinosaur carcass. Or riding a dynamite-powered unicycle through an erupting volcano. Or adding an attachment to one of your shotguns that makes it shoot cybernetic bees. Or an option that makes enemies bleed donuts. If these things sound fun to you, XXL will provide plenty of entertainment.

XXL’s main feature is the “Gunstacker,” a system that allows you to, you know, stack guns on top of each other. You can have up to six different weapons per stack, and one pull of the trigger fires them all at once. The game has eight different weapons: machine pistol, Tommy gun, shotgun, grenade launcher, rocket launcher, laser rifle, flamethrower, and chainsaw. You can find up to four of each, and each type has four unique power-ups that you can buy from the in-game store. Math tells me that this means that a full six-gun stack has a little over 820 million possible configurations, so you have a lot to work with there.

It’s a lot of fun to try different combinations of weapons and add-ons. You can tweak your stacks at checkpoints, but odds are you’ll settle into some favorites. My go-to set had a laser rifle that leeched health from enemies, two machine pistols that regenerated my health while I fired them, a chainsaw that sucked up all the money that enemies dropped, a Tommy gun that fired ricocheting bullets, and a third machine pistol with an “air buffer” that extended my jumps.

My back-up stack had a shotgun that slowed enemies down, a rocket launcher that created clouds of poisonous fog, a grenade launcher that shot mines, another grenade launcher that dispensed health and armor, and a laser rifle that shot giant balls of energy. Between these two builds, I could handle pretty much any encounter, but it took some experimenting to figure out which ones were the best for my needs.

Not all of the add-ons are inherently useful, however. One of the grenade launcher’s power-ups squirts out puddles of slippery butter, which I suppose gives you some kind of tactical advantage, but it’s mostly just hilarious to make a giant dinosaur slip and fall on its face while a cartoonish slide-whistle sound effect plays.

But once you’ve found a bunch of guns, XXL offers a lot of options for taking out your foes, and the Gunstacker is an all-around good time.

Seriously, hear me out on this one.

XXL treats most enemies as solid objects — even after they’re dead. This means that you can stand on a lot of them, Super Mario 2-style, and use them as platforms. Some sections of the game even require this, like one early on in which Sam falls into in a pit while enemies constantly spawn above. As you kill them, their corpses pile up until the heap is tall enough for you to escape the hole.

Another section has Sam dropping larger monsters into saw blades and using them as stepping stones to get across before they disappear into the flurry of metal death. It’s all a little morbid, I guess, but it’s also a clever idea that complements the genre-trope-y massive body count by putting it to practical use.

Multiplayer you can believe in

XXL features drop-in/drop-out co-op for the entire campaign. You can read a bit about it in our earlier preview, but how it works is that you and a buddy (playing as jerky-loving sidekick Huff) join forces to make twice as many bullets fly through the air as before. You can imagine how chaotic that can get, but it’s generally easy to tell who’s who due to the color-coded auras around the characters. Also, their shirts are different colors, so that helps, too.

From what I could tell, difficulty doesn’t increase to compensate for the second player, so bringing a friend along makes fighting way easier. I can’t say the same about the platforming, however. Having another person there makes even the most basic jumping sequences exercises in coordination and communication, most of which end in one player either dying or falling behind (that is, scrolling off the edge of the screen). That means that they have to catch up while trapped inside a shameful bubble.

If one player runs out of health, he falls down for a little while. The other person can revive him more quickly and add to his health upon his return by picking up a bunch of weird, floating crosses that spring out of his unconscious body. Depending on where you fall down — like, say, right next to a pit full of spikes — your partner might have an easier or tougher time collecting the little icons.