The Sega Genesis versus the Super Nintendo was one of the earliest battles in the “console wars,” and now some filmmakers that specialize in stoner flicks are going to adapt the story for the silver screen.

Sony Pictures and The Social Network producer Scott Rudin announced that they are developing the Blake Harris book Console Wars: Sega, Nintendo, and the Battle that Defined a Generation into a movie, according to Comingsoon.net. Superbad co-writers Evan Goldberg and Seth Rogen are set to direct and write the film, which chronicles Sega’s attempts to take on the Nintendo Goliath in the 1980s and 1990s. 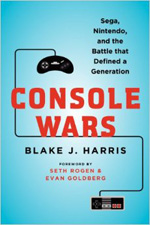 Author Harris is on the project as an executive producer. He is separately co-directing a documentary that covers this same story.

Harris’s book is due out from Atlantic in August. The writer conducted hundreds of interviews to gather the full story of how a small company took on one of the biggest corporations in gaming and how it changed the industry.

While it might surprise some that Hollywood is so keen to adapt this story, Console Wars is picking up a lot of buzz in publishing circles.

“Blake Harris’s amazing book has all the narrative drama of the work of [Moneyball author] Michael Lewis and [Bringing Down the House author] Ben Mezrich,” Atlantic Books publisher Toby Mundy said in a statement after picking up the rights to the book last week. “It should appeal to gamers and non-gamers alike.”

Rudin previously produced the adaptation of Lewis’s Moneyball, which told a literal inside-baseball tale of how the Oakland Athletics began using Sabermetric research to draft and acquire players. That film starred Brad Pitt and Jonah Hill, and the Academy of Motion Pictures nominated it for a Best Picture Oscar. Interestingly, that film also had a tie to gaming, as Activision chief executive Bobby Kotick played the role of Oakland’s owner Stephen Schott.

It’s likely that Sony Pictures is hoping to get the same kind of quality out of the adaptation of Console Wars.