LOS ANGELES — The University of Southern California has one of the top game design programs in the country. The school’s Advanced Games class consists of big student teams who are building games from idea to completion over the course of a full academic year.

Mike Zyda, head of the GamePipe Laboratory at USC Games, invited me to visit Advanced Games class to see seven works in progress at the point where all of them had working demos. I was stunned to see just how advanced these games are. They’re being built by teams that range in size from 15 to 60 students. (See our story on the game program here).

The USC graduate program has been named the best game design program for the fifth year in a row by the Princeton Review, while the undergrad program is also ranked No. 1. The advanced games class is a program within USC Games, which is a collaboration of the USC School of Cinematic Arts’ Interactive Media & Games division and the USC Viterbi School of Engineering’s department of computer science.

The summer before, the game creators pitched their ideas to the game faculty and received approval. Then they recruited student teams and started working on the games at the beginning of the fall semester. The teams are building prototypes that, by the end of the year, will be full working demos with multiple hours of gameplay. They will show these off at USC’s game demo day in May, and they could very well be a ticket for many students to get jobs in the video game business.

The games in the works have a rich variety. They include a platformer called Bloom; Social Clues, a game for the autistic; a stealth multiplayer title dubbed FatLoot; mobile game Cole; virtual reality game Rhea; ocean-exploration title Miralab; and a real-time strategy game called Maestros. Each team has four or five leaders from different parts of USC, including the computer science department, business administration, interactive media, films, and animation. The students in the Advanced Games Program come from both undergraduate and graduate programs. There’s so many of them on the teams that the whole bunch doesn’t fit into some of the engineering and cinematic arts classrooms. 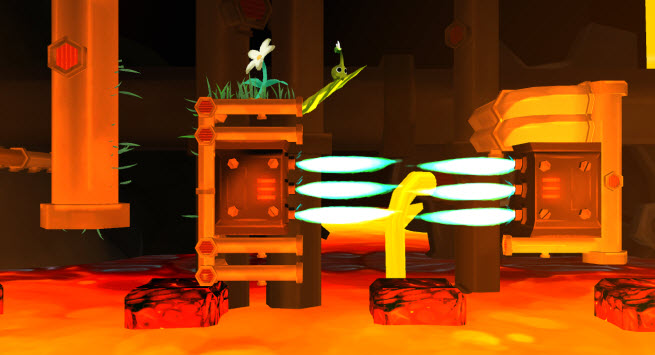 Above: Bloom, a platformer from USC students.

Bloom is a 2.5D adventure platformer game that is as ambitious as any console title, with a team of 60 students. You play the last plant seedling on Earth in the future where everything has been industrialized. Robots gained control and killed almost all life. Your task is to turn everything green again.

“It took a lot of work to make it look this good,” said Khaled Abdel Rahman, one of Bloom’s team leaders, during a demo. “We are trying for a triple-A aesthetic.” 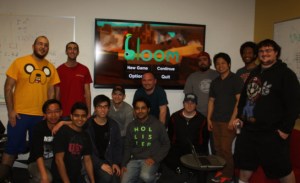 Above: USC’s Bloom team leaders. Khaled Abdel Rahman is in yellow on the far left.

The seedling starts alone, walking and jumping around the world. A robot takes pity on you and helps you escape. You scroll sideways through a Wall-E style landscape that is bleak and depressing. The music is moody but pretty, almost hopeful, as you explore.

Bloom combines both traditional controllers and gesture-based controls. You encounter puzzles where you have to use unique gesture-based abilities like growing a spiked root outward from the ground. This gives you a platform to cross gaps and a weapon to disable robots. Anything you touch sprouts with life. You have to use these abilities to figure out puzzles.

“This is where the game shines,” Abdel Rahman said. “The puzzles get more and more complex along the way.”

You have to periodically fight bosses that require some deft maneuvers to beat. Abdel Rahman showed a multistep process that the seedling has to do in order to damage the robot boss and eventually take it down.

Each of the three levels has a completely new art style. The title is original, but it will remind you of the gameplay and art styles of Pikmin and Flower. By the end of the semester, the game will have four levels and a complete boss fight. Eventually, if a publisher picks it up, the full game could have more than eight levels.

The game will be both single player and four-player multiplayer. It is built in Unity 3D engine and looks beautiful, with lots of colors and realistic shadows and lighting. The title supports cross play between the iPad and PC. The plan is to adapt it to the PlayStation Vita as well.

The team uses professional tools like Unity, SBM for version control, Google Drive for art work, and Hansoft for bug-tracking and project management. Most of the tools are donated. 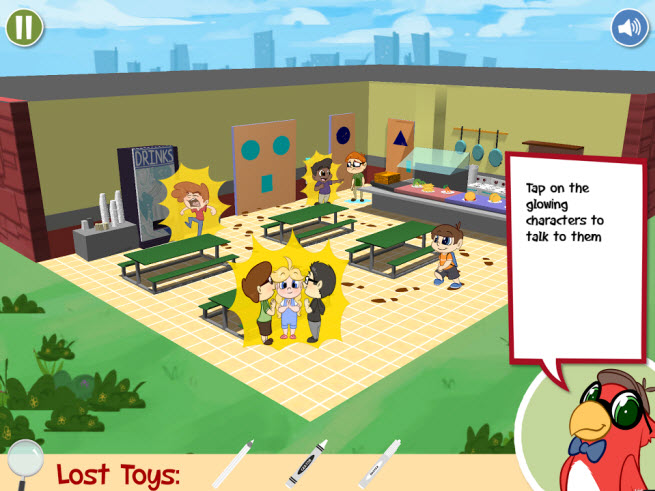 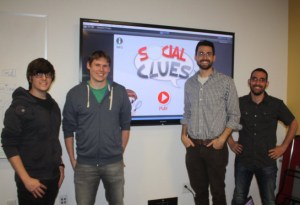 Social Clues is a “serious game” that teaches children with autism and other disabilities that can affect how well kids communicate. The puzzle-adventure iPad game and therapy tool shows children “soft skills,” or how to talk with other people. One of the team leaders is Jeremy Bernstein, whose wife, Karen Okrent, is a speech language pathologist. They came up with the idea to use a game to teach kids practical communication skills. They recognized that a game could combine kids’ affinity for interactive media with the need to practice real-world behavior through role-playing.

“My wife scoured the landscape and found nothing was meeting her needs,” Bernstein said in an interview.

The game starts with the Mum family, whose members are antisocial and just watch TV or play with toys. One day, their toys disappear. Then they have to go out to the real world and talk to people to get their toys back. Pete is a boy,and Kate is a girl, while their pet parrot Sherlock is the one who knows how to talk. 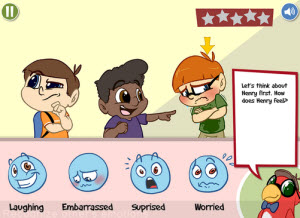 The parrot tells them about situations that they get into and asks them what they will do. It starts with the child learning how to converse with a father, advising them on matters like making eye contact. Then it leads to situations like a scene in a cafeteria. A girl drops her tray and is crying. The child-player approaches her and starts a conversation.

The child can offer supportive comments or ignore the girl’s tears. If they make the wrong choice, the parrot will tell them why it might be incorrect and what might be the choice with the most empathy. It teaches them how to listen and focus on what the other person needs, rather than what the player needs, and what the player can do to help. 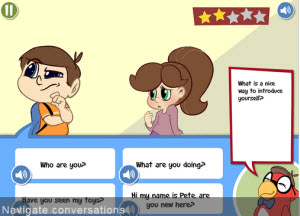 Above: Social Clues teaches kids how to have conversations and make choices.

The game is for high-functioning kids with autism, ages 5-9. It is also for neural-typical children ages 5-7. They created a full script for the game and were approved to start their project last summer.

Bernstein and Okrent assembled a team of 30 students to make it. The team built the prototype, and they have some playtesting sessions going on with the local children’s hospital. If they’re on the right track, they’ll pursue a way to publish the game. They created a full script and USC approved them to start their project last summer.

“We want the parents to be able to dig deep and understand exactly why the kids made their choices,” Bernstein said.

Jay Henningsen, founder of serious games firm Virtual Heroes, saw the demo and told Bernstein he had a great project and that he should speak at the upcoming Games for Health conference in Boston.