Tomb Raider has tombs again. And that’s how Shadow of the Tomb Raider starts out, with the iconic Lara Croft crawling through a narrow rock tunnel that threatens to cave in on her. With mud caked on her face, she isn’t glamorous, and she isn’t a an innocent and vulnerable as she once was.

Since Square Enix’s Tomb Raider reboot in 2012 and the coming of age tale in Rise of the Tomb Raider (2015), Lara Croft has become a cunning and cold-blooded killer. Now she can drop out of the trees and strangle her enemies with a rope in one fluid motion. But as we find out in the third game in the reboot series, Lara is now an accomplished archaeologist and adventurer who can explore and decipher secrets of tombs even as she pursues the evil Trinity organization that killed her father. But is she capable of stopping the apocalypse?

“She’s definitely less vulnerable than she’s ever been. In Tomb Raider 2013 she was thrown into this situation where she was being very reactive,” Chris Johnston, brand manager at Crystal Dynamics, in an earlier interview with GamesBeat. “In Rise of the Tomb Raider she became more proactive. She went on her first expedition. In this game, this is the most capable and calculating Lara players have ever seen in the modern version of the series. Other words like ‘obsessed’ and ‘driven’ are ones we use quite frequently.”

The early hours of Shadow of the Tomb Raider have some beautiful scenes, like when Lara has to tail a villain during the Day of the Dead celebration in Cozumel, with all of its beautiful colors. She wears a Day of the Dead mask to stay hidden in the shadows while she tries to listen and track where the villain is going.

How Lara Croft changes as a character 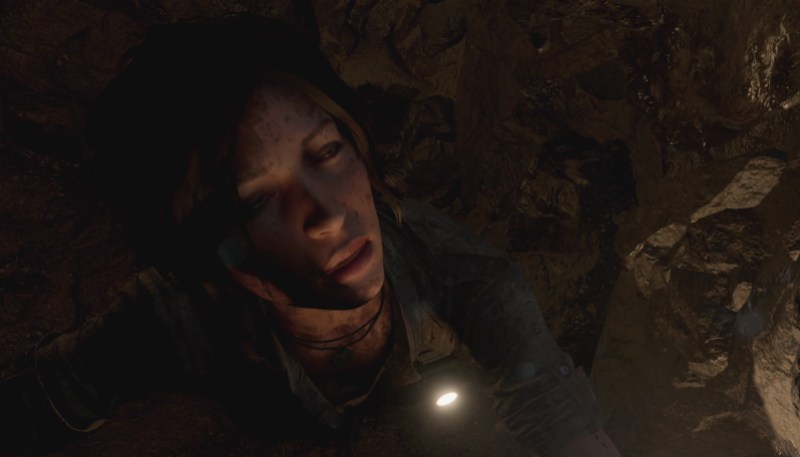 Above: Our first impression of Lara Croft in Shadow of the Tomb Raider.

I played the first four hours or so of the game, which debuts on the PC and consoles on September 14. It starts out in a Mayan ruin in Mexico, near the tourist town of Cozumel. With dirt smeared on her face, Lara makes her way out of the cave, and, as she climbs with her pick ax across a wall, we see a wide cinematic shot of a beautiful underground temple.

Lara is impetuous. Rather than wait for her friend Jonah, she forges ahead and tries to decipher the secrets herself. That’s a continuous theme in the first hours, where Lara takes as many risks as possible, as if every minute counts, and Jonah tries to bring her back to the real world or slow her down. She ignores his advice, and it turns into a huge crisis for them later.

Lara has a single-minded mission of destroying Trinity, getting justice for her father, and finding any artifacts that Trinity is pursuing before they do. With that mix of motivations, it isn’t clear what is driving Lara at any given time, whether it’s her own ambition, her pride, her love for her father, her yearning for the truth, or something darker like revenge. The imagery of shadows across the face of Lara Croft or her smearing her face with mud for jungle camouflage is symbolic. It brings to mind the word “shadow” in the title, and whether she is changing for the better or for worse. 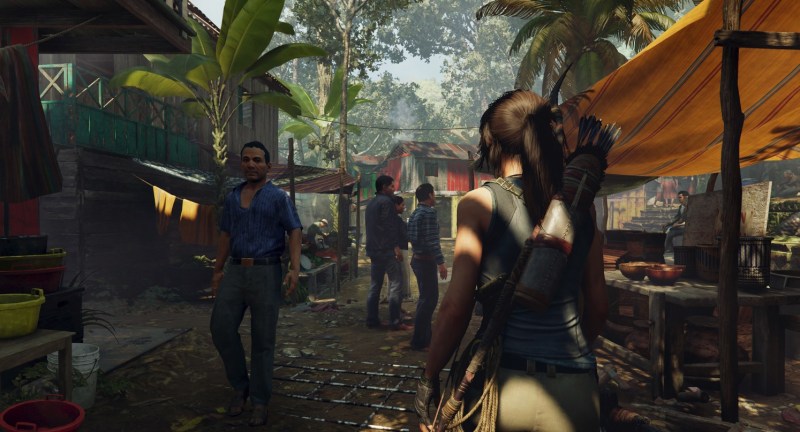 Above: The villages are scenic.

We get some clarity when we meet the leader of Trinity, Dr. Dominguez, who is steeped in lore like Lara. But when they confront each other, it’s not clear if the villain at that moment is Dominguez or Lara. She grabs an artifact, and that sets in motion the events of the apocalypse. The immediate result is a devastating flood that wipes out a city. While Lara wants to rush ahead to beat Dominguez, Jonah wants to stay behind and help the victims of the flood. Does Lara balance her power and responsibility appropriately?

“That’s what she’s beginning to understand. With the more power that she has, she’s more capable now. Her decisions have much greater impact, and this time, a world-ending impact,” said Johnston.

You never quite know if she believes that the ends justify the means. Is it OK to go after that treasure and deny it to Dominguez because that will save the world? Should she sacrifice her friends and innocent bystanders as she pursues artifacts, possibly for her own ambition or revenge? In the hands-on session, each one of the scenes takes us down a darker and darker road.

Hands-on in the ruins and the jungles 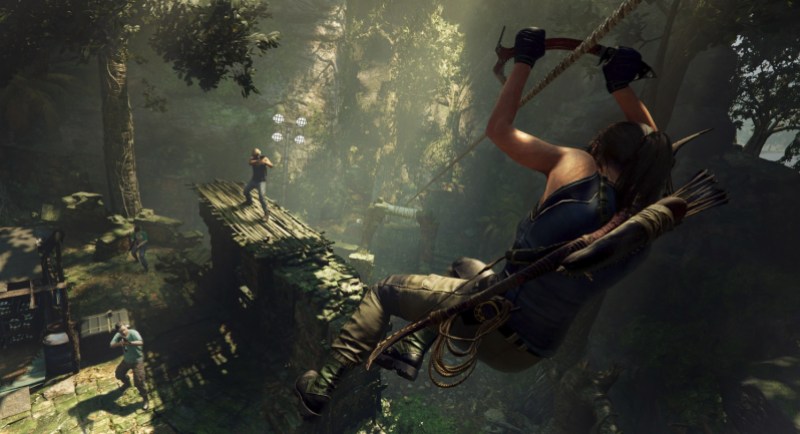 Above: If you swim to air holes, you can last longer underwater.

I played through several major chapters in the early game. In one chapter, Lara is a silent killer in the jungle, strangling or stabbing stray guards. She maneuvers with a rope to hang unsuspecting guards from the trees. When you sneak up effectively on a Trinity guard, you can execute a takedown flawlessly. But if you mess it up and the guard confronts you, a posse will converge on you. No matter how many times I succeeded as a stealth killer, I still had some slips that forced me to redo some takedown scenes.

But it’s cool that Lara has many options at hand. She can sneak up behind with a knife, pull guards into the water and dispatch them, jump down from above, or shoot silent arrows from a distance. Only once in a while do you have to go in hot with guns blazing. Lara gets so obsessed with her pursuit that she forgets about Jonah.

“You lock onto a problem, and everything else disappears,” Jonah says. 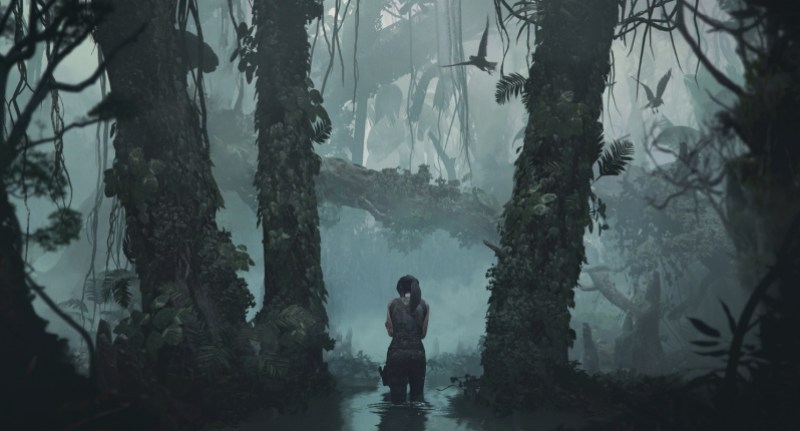 Above: The jungle is scary.

But that’s just when you’re confronting human enemies. At one point, you confront a jaguar who has just eaten one of Lara’s friends. It traps Lara in a restricted area in the jaguar’s den, and then it hunts her. You can hear the jaguar growl, often before it strikes. Its deep growl is frightening. If you turn toward it and shoot a well-aimed arrow into it, you can force it away. Otherwise, it can wound Lara and eventually bring her down. I did this until I ran out of arrows. I had to craft more arrows quickly, but then I had to deal with another attacking animal.

That clash with the animals changes things up. And so does the occasional puzzle and tomb raiding. You can choose to do difficult combat and make the puzzles easy. That’s what I did, for the sake of finishing my demo on time. I faced one moment at a bridge where I had to ask for help because the answer wasn’t so obvious to me. 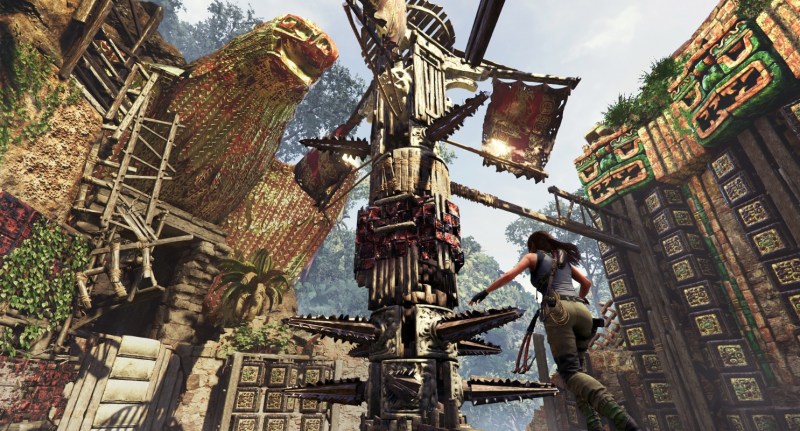 I saw some other big puzzles to tackle underwater, inside a temple, and in a lightly flooded area. My demo ended just as I approached an impossible-looking mechanical puzzle, built by the ancient Mayans. You can see the image above. I was about to sink my teeth into that one when I ran out of time. It seemed I took too long doing the other puzzles.

Not all is perfect 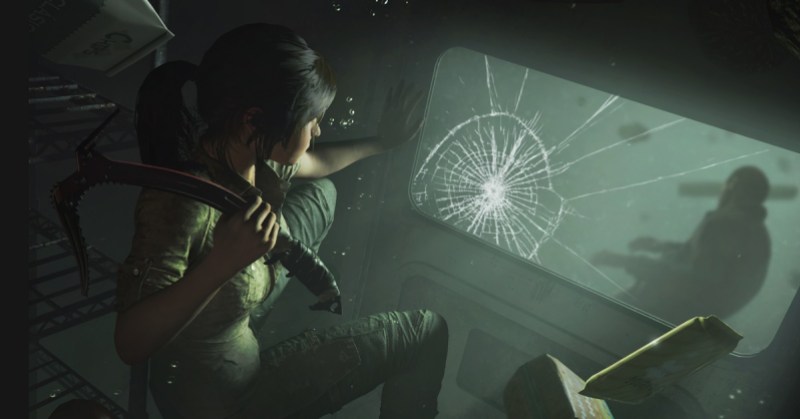 Lara looks amazing in terms of realism. The jungle fauna sways when touched. Every now and then, I saw something in the graphics that didn’t look right. Sometimes Lara’s lips look really red, as if she has lipstick on, but in the next scene, she looks as though she isn’t wearing any. Likewise, some moments the camera focuses on her and she looks older, and then in other scenes, she looks like a teenager. The inconsistency in how Lara looked was jarring. But I wouldn’t say it really bothered me.

I liked the calm moment where Jonah and Lara could have a conversation. They talked about their dreams and nightmares, like failing to protect a loved one. Lara asks if Jonah would remake the world with power, and turn back time to when the loved one was alive. Jonah thinks about it and replies, “And lose everything else? No way. I like this world. Everything I love now is in it.”

I also thought the underwater scenes were both good and bad. As Lara swam in flooded underground caverns, I felt myself get claustrophobic as Lara almost ran out of breath. She has to fight underwater hazards like piranha fish or dangerous eels. And she has to swim just far enough to reach the next air hole. It’s kind of a scary feeling, like you’re almost drowning, and it kind of made me ill. I had to pause before I could proceed with the game.

I haven’t seen some of the loveliest parts of the game yet, such as the open world hub of Paititi, a native Mayan (yes, a reason exists for that) hub in Peru. It is three times bigger than any previous hub in a Lara Croft game. It’s a bustling ancient city, teeming with life. The game isn’t perfect, but I know I’ve got many hours of fun to get through still. 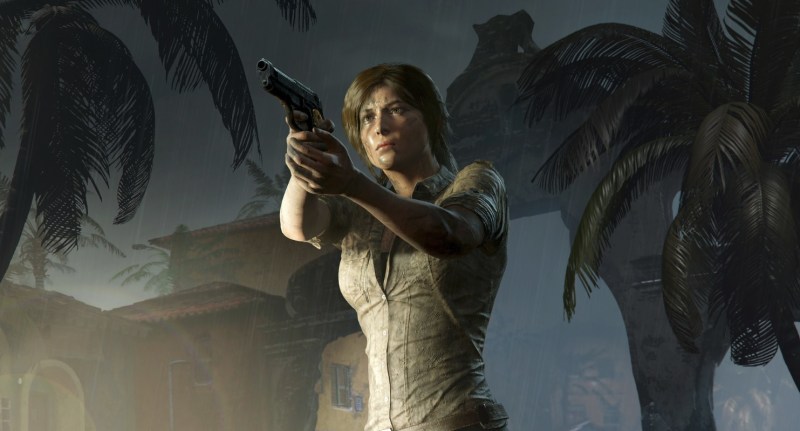 Shadow of the Tomb Raider takes Lara Croft into a new stage of character development. Fortunately, she is nowhere near the previous incarnations of Lara Croft (like the arrogant and swaggering Angelina Jolie character in the Tomb Raider movies). But she is becoming darker, and conflicted when it comes to saving people with kindness or attacking enemies to save the world.

This game has a lot to offer, from the side missions to the puzzles to the stealth combat. It has evil humans that you’ll enjoy taking down, survival trials in the jungle, and other things that you have to fight. And it’s got interesting characters — including the most interesting character of all, Lara Croft.