Warner Bros. is unveiling a new trailer that explains some of the story behind Middle-earth: Shadow of War. And this one will get fans of the J.R.R. Tolkien world wagging their tongues about what it means.

The publisher is torturing us with the slow release of details, but the story is one of the big things this game has going for it. I’ve said before that the storytelling in this series — which was initiated with 2014’s Middle-earth: Shadow of Mordor — is as good as anything Tolkien wrote, and this trailer from developer Monolith and publisher Warner Bros. has me thinking more of that. The title was slated to come in August, but we’ll have more time to decipher the clues about the story as the game now debuts on consoles and PC on October 10. 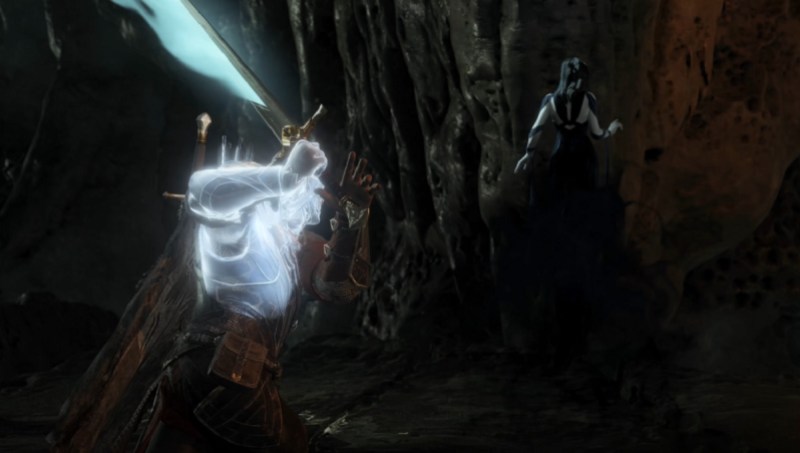 Above: The Bright Lord goes after a Shelob-like woman in Shadow of War.

The tale of Talion the Ranger and the wraith (ghost) Celebrimbor is about a Bright Lord who challenges the Dark Lord Sauron. The video game story takes place in the 60 years that lapse between the end of The Hobbit and the beginning of the The Lord of the Rings.

In the trailer, one of the new characters is a mysterious woman dressed in black. And Tolkien fans will recognize Shelob, an enormous black spider who lived through the ages, as one of the evil presences in Mordor. Based on the sequence of events in the trailer, it appears that this woman in the black dress is Shelob.

Sauron also appears in the video, fighting against Talion, who is supported by the wraith of ring maker Celebrimbor, who appears to be on a single-minded mission to wrest the One Ring from Sauron and his minions.

The Shelob in a woman’s form asks Talion what he is willing to sacrifice, and he says he has already sacrificed everything. And she says he hasn’t. We see scenes of soldiers of Gondor fighting against evil forces. We see Sauron sending the Nazgûl, the nine enslaved wraiths who hold the nine rings for men, against Talion. And we see Talion marching against Sauron’s forces and battling a Balrog.

“When the time comes, I will do what is necessary,” Talion says in the voice-over. 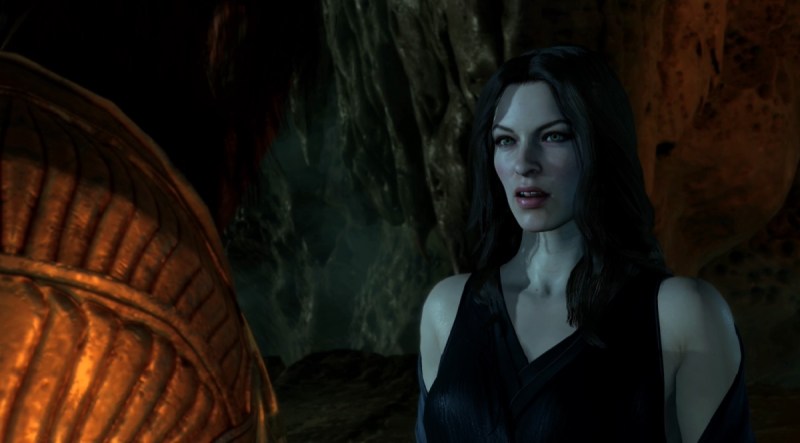 Above: This woman wields a ring against Talion.

Now here’s my guess. Shelob and Celebrimbor believe that Talion has to amass an army of Orcs against Sauron. But Talion is torn. He is tied to Celebrimbor and his mission of becoming the Bright Lord and destroying Sauron. But by leading an army of Orcs, Talion is going to be an enemy of Gondor. In one point in the video, Talion says, “I will not allow them to be slaughtered like my brothers at the Black Gate,” where Talion himself and his fellow Rangers of Gondor were slain. We see the Gondor warriors fighting Orcs, with Talion by their side. A Gondorian woman pleads with Talion not to become corrupted by the Ring.

We already know that Talion will command an army of Orcs and launch a civil war among the Orcs against Sauron in Shadow of War, which will severely slow down Sauron’s ability to conquer Gondor and the West in the Third Age. We also know that Talion could not possibly have won, or else The Lord of the Rings story wouldn’t have happened.

Middle-earth: Shadow of War will be available for PlayStation 4, PlayStation 4 Pro, Xbox One, Project Scorpio, and Windows 10 PC (Windows Store and Steam) beginning October 10. We’re certain to hear more about this next week at the Electronic Entertainment Expo (E3), the big game trade show in Los Angeles.