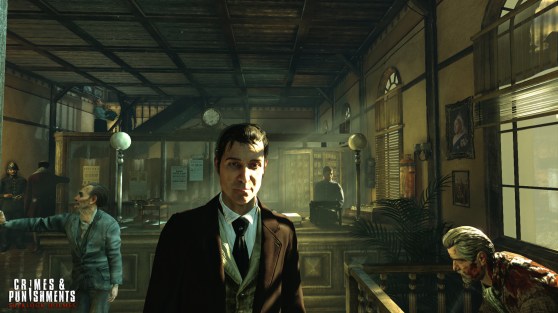 LOS ANGELES — The Sherlock Holmes you see in developer Frogwares’ new game Crimes & Punishments isn’t quite the aloof character that author Sir Arthur Conan Doyle created. He’s a bit disheveled, sneakier, and has the ability to stop time as he scours a person’s appearance for clues. The once gentlemanly adventure-game star is now a deceitful amalgam of Arthur Conan Doyle’s original character and the 21st-century interpretation we find on television and in movies. Finally, Sherlock Holmes has caught up with the times.

This new Sherlock is slightly older, and when we first see him in Crimes & Punishments, he’s in desperate need of a shave. His world is much darker — full of gruesome murders that take inspiration from Doyle’s later stories and a spatter of Russian literature. Crimes & Punishment is the seventh installment in Frogwares’ long-running adventure-game series, and it’s the first built in Unreal Engine 3, making it graphically superior even to the gorgeous Testament of Sherlock Holmes game released last year. But the new engine is only part of the series’ transformation.

Once you start exploring London and search for evidence in the game’s eight seemingly unconnected cases, you’ll see the world through Sherlock’s eyes. Frogwares’ version of the character can pause time during his investigation, a feature that borrows elements from both the new BBC television series, Sherlock, and the recent Hollywood movies. When he does, words hover in the air, alerting the player to signs that give Sherlock his basis for deduction. This process is delightfully fluid and does away with the clunky menu sorting that plagued previous titles. 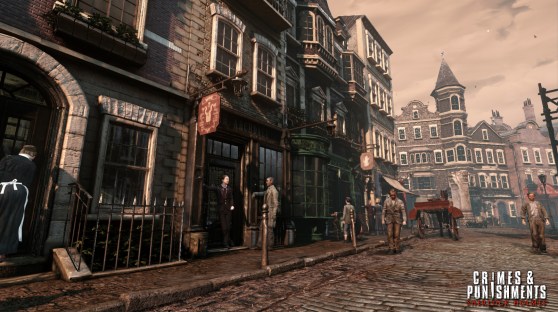 But you aren’t simply deducting information to catch the right crook anymore. Sherlock’s new flair for deceit, a feature that first appeared in Testament, means he can choose to “absolve” or “condemn” any nonplayable character (NPC) suspected in a case. You’re no longer working toward a definite end of a case now but instead satisfying Sherlock’s odd sense of propriety. Even NPCs that are astoundingly guilty can go freely back into the world if Sherlock decides it isn’t worth his time to accuse them or share his evidence. He can also condemn the wrong person if he chooses.

Crimes & Punishments shows us the very manipulative side of Sherlock that modern audiences expect. He remains an amoral character in a world desperately trying to reclaim its morality, and he seems to revel in it. Frogwares has even reworked its once clunky conversation system to now provide players with weighted dialogue choices similar to those found in Mass Effect. If you want, you can make Sherlock go full rogue just to see how the story changes. The game has a few poignant moral choices that will ultimately change the ending, but Frogwares was not willing to share how many endings you can get.

I’m very interested to see how well moral choices work in Crimes & Punishments. The game isn’t slated for release until 2014, which gives Frogwares plenty of time to tweak the system. Fans of more modern interpretations who found this adventure series too slow or a bit shallow might really enjoy the more complicated path Sherlock now walks. He’s not afraid to push Watson to the brink, and he definitely doesn’t care about combing his hair before waltzing into Scotland Yard. This Sherlock Holmes is teetering on the precipice of antisocial behavior.