In most shooters that aren’t Titanfall, your main targets are other players, not a lumbering robot. In the main mode of Minimum, an upcoming PC shooter from Human Head Studios and one of Atari’s first major games after emerging from bankruptcy, the complex shooter gameplay scales up to include support and defense for an oversized ally.

Though it visually resembles the blocky style of Minecraft, Minimum isn’t about reshaping your environments. The game will launch with just two maps, a canyon and a robot factory, and you can’t dig them up or rearrange them like you can with Minecraft’s maps. Instead, Minimum’s main Titan Mode feels like a third-person shooter version of League of Legends, where you play as the minions who have to escort a larger hero unit to the enemy’s base. 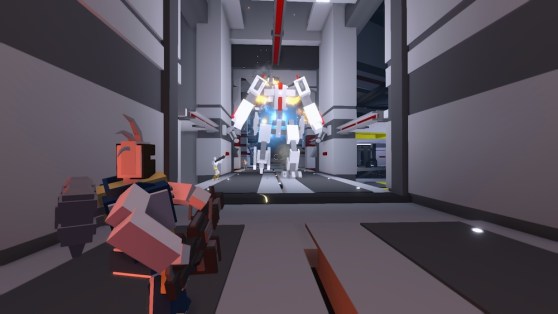 Above: One of the maps takes place in a Titan factory, so you can see them roll off the assembly line and right into battle.

The Titans act like giant Rock ‘Em Sock ‘Em Robots on rails and exchange brutal punches when they meet on the map. If you can escort your Titan to the enemy’s base, your side wins.

Here’s where things get complicated. Your handheld weapons won’t do a lot of damage against the enemy Titan by themselves, but if you work together with your team, you can put a bit of a dent in the Titan’s health meter. Or you can concentrate on picking off the enemy teammates and grabbing their weapon shards.

Weapon shards will evolve your weapon over the course of a round, so a basic plasma launcher will eventually evolve to sprout five barrels for a wave of projectiles. When you reach the highest level of weapon evolution, your gun will glow bright red, making you incredibly powerful and a prime target for the other team.

Amid battle, you can collect a different type of shard to create new armor, which will outfit your blocky figure with extra abilities like double jumps or extra damage. They’ll even give you a new look, such as a Viking hat complete with horns. 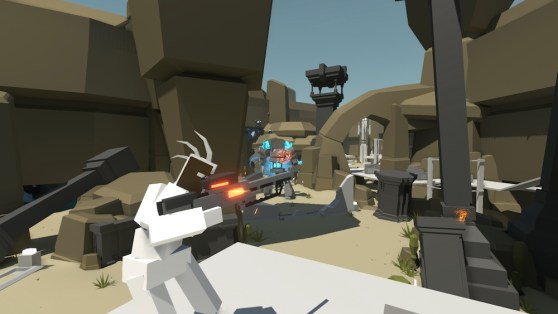 Above: Helmets and armor will make your plain block figure look more unique.

When both teams’ Titans have fallen, it’s time to go hunting Creeps. These are tiny, spider-like targets who spawn in particular areas of the map. You and your team can harvest their Titan crystals to make it a lot more powerful the next time it appears.

This moves the focus away from fighting the other team and has both sides scrambling to hunt the fast-moving Creeps. If you blast a Golden Creep, it’s like getting the Golden Snitch in Harry Potter’s Quidditch — it’ll give your side a huge advantage in the next Titan fight. With a charged-up Titan and a more powerful weapon, it’s easier to clear a path for your Titan to reach the other side of the map and win the round. 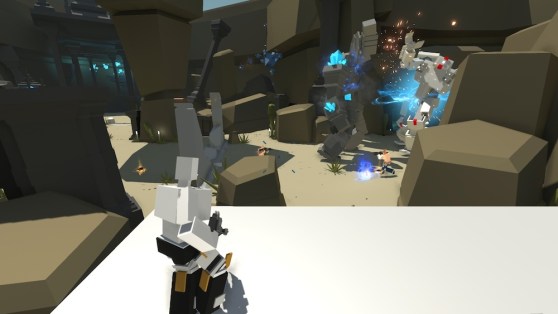 Above: As you upgrade your weapon, you’ll be able to help support your Titan as it travels across the map.

Gearing up for combat

Repeated battles will let you harvest another kind of shards, which take the shape of Dungeons & Dragons dice (of the d4, d8, d12, and d20 variety.) With these shards, you can unlock schematics to create new weapon types. Additional objectives, like killing five enemies in a round, will also reward you with extra shards.

Minimum will be launching soon with just one gameplay type and two maps, but developers from Human Head told us that additional modes, maps, and features are in the works. For example, they want players to be able to trade schematics and resources in the Steam Community Market.

Between the Titans, Creeps, and variety of collectible shards, there’s much more to Minimum than the name suggests. It’s hard to tell from the plain-looking visuals, but with so many different objectives vying for your attention, Minimum is a fairly complex strategy game that just happens to be based on solid shooter mechanics.