Starr Long and Richard Garriott have made a lot of games over the years, from the Ultima series to Toontown. But they’ve never been quite so busy answering to their fans as they have in the past year.

The founders of Portalarium are creating Shroud of the Avatar: Forsaken Virtues, through Steam Early Access. And that means they’re basically co-developing the fantasy role-playing game with fans, particularly those who helped them raise $1.9 million in a crowdfunding campaign on Kickstarter in 2013. They’ve done monthly releases 13 times in the past year or so, slowing building out a game world so that fans can play as the world changes before their eyes. The game is still in a pre-alpha state, but Long and Garriott say they’re making good progress. There are 100,000 players now, with a third of them paying for content.

We caught up with Garriott and Long at the recent 2015 International CES, where they were showing the game at the booth of sponsor Plantronics. Here’s our edited transcript with them. 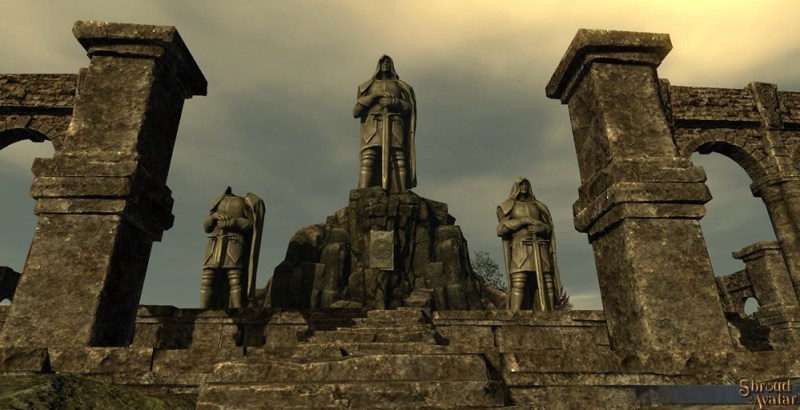 GamesBeat: What are you showing today?

Starr Long: Of the things that have changed most recently since we last spoke at E3, the first is that we launched on Steam Early Access. We did Steam Greenlight, and now we’re on Early Access.

Long: We do monthly releases. We’ve done that 13 times, every month. We were only doing four-day access, but now that we’ve launched on Steam Early Access, we’ve gone 24/7.

Garriott: There still may be a wipe or two left before the end of the beta process. There surely will be. But it’ll only happen when it has to. One of the things I find most exciting about the stage of the development process we’re in now, it reminds me a lot of the Ultima Online beta. I don’t know if you were around then, but it was a wonderful era of MMOs. Everybody could see the promise of what was coming into existence. Having people in the game 24/7 gives us a lot of feedback in real time as to how to make it right for them. We’re entering that era now with Shroud of the Avatar.

GamesBeat: What’s that book there?

Long: One of the things we’re doing now. We have a really strong community. It’s one of the strongest parts of the game. We support it so much because the game is a sandbox. It’s very important that the players are given the tools with which to create interest for each other.

They have a website with a calendar for all the player-run events. We took that data and made a book in the game. None of these are anything we created at Portalarium. These are all events that the players do themselves. Everything from PvP tournaments to fishing contests to dungeon runs. They had a New Year’s Eve party. We publish this with each release, this book of all the player events.

Garriott: Eventually we won’t need to publish it. It’ll just be automatic.

Long: Yeah, we’ll eventually stream it. We provide support for this and things like, if they want to have prizes for a contest, we’ll give them gold or items or something like that. Another thing I’ve been blown away by in our community, a couple of guilds, as soon as we went on Early Access and started to widen our audience beyond the core backers, they took it on themselves to stand in the starting town and hand out gold and potions. They basically did an AMA for players coming in. Because we’re very sandbox-ey, there isn’t a lot of hand-holding at the beginning. The players are filling that in themselves.

GamesBeat: What does it mean to be pre-alpha in this kind of development?

Garriott: It means it’s mostly playable, but not finished.

Long: The technical definition of alpha is feature complete, and then beta is content complete. We’re neither of those. It’s a kind of gray area. We’re doing this very iterative development. The third or fourth week of every month, we put out a release of new content. We always devote 30 percent of each month’s cycle to responding to player feedback. It’s a very iterative process.

Most of the major features are in. We have combat and advancement. Probably 70 percent of the skills are in now. Advancement happens with trainers, so you have to go to someone to learn new skills. We have guilds in now. The only really major feature that we don’t have implemented yet is crafting skills. All the crafting right now is 100 percent successful.

GamesBeat: How much work and time has gone into development now?

GamesBeat: Do you already have enough indicators that it will be successful?

Garriott: Fortunately, we can safely say yes to that now. We already have 100,000-some-odd followers. 36,000 of those people are paying. Presumably the people that are following, most of them will convert. Even that would be more than enough to sustain us. But with that many people pre-signed up, that indicates we should do well beyond that once we go retail.

Long: The nice thing about doing this iterative approach and these monthly releases is that we’re never moving in a wrong direction for more than a month. In a regular retail or even digital release, you can do some market tests. You have a general idea of whether you’ll be successful. But you don’t really know until players start playing. The fact that we started letting all our backers play 13 months ago–They’re not shy about telling us if they don’t like something. 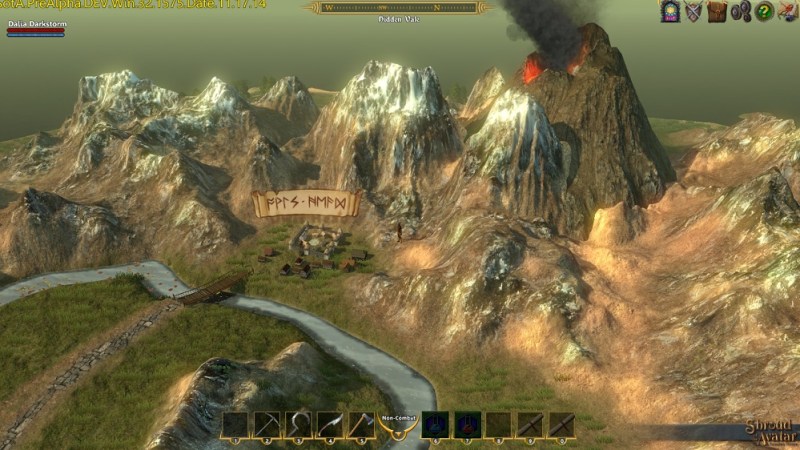 With all that said, we’re definitely building a product for the audience that wants an Ultima, Ultima Online type of experience. That means it’s much more sandbox, much more open-ended. We’re not going to have quest indicators over non-player characters’ (NPCs) heads. It’s more old-school. But what we’re excited about is that we’re seeing a lot of interest among the audience for that. Wasteland 2 was a great example. There’s an audience for this type of product.

Now, is it going to be as large as the World of Warcraft audience? No. But we’re also not spending $100 million making it. That’s what makes this a great time for us as developers right now. The whole indie and crowdfunding movement allows us to make products for very specific audiences, as opposed to having to make a product that’s going to appeal to “everyone.”

Garriott: The nice thing about that — Some of the biggest hits of the future will be $300 million games made by big studios. Most of those will be sequels to already-successful games. A lot of the new future big successful games, though, will come from a more independent route.

It’s great that we can sustain it in this way, but I don’t think that implies that we’re not capable of reaching a much larger audience. We just don’t have to have that larger audience at this point in our development.

GamesBeat: When you’re nearer to beta and launch, do you envision going to more traditional kinds of marketing?

Garriott: The digital connection to our community — we’re an online game. It makes sense that digitcal distribution is a key part of our future. We were in talks with some of the big retail outlets as to whether we should put together a packaged version for them. We’d be happy to do it if it remains relevant. We’d be happy to do things like print marketing if that remains relevant. But so far digital is so much more cost-effective for us, both in marketing and in sales and distribution, that that’s where the majority of our effort is going to go. We’ll see if physical media is really as helpful in the future. 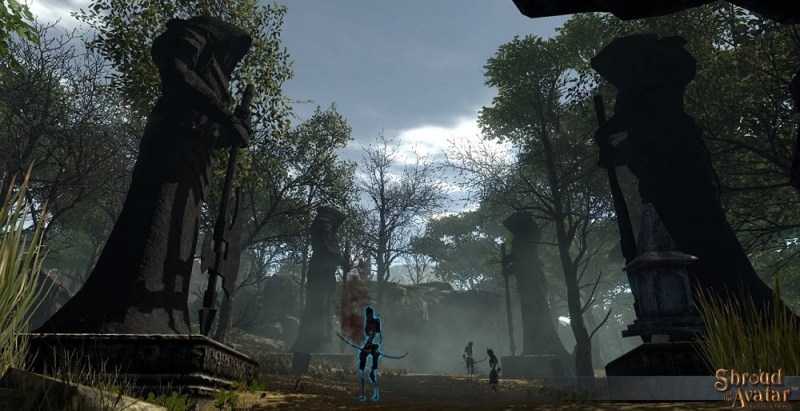 Long: Right now, because we’re crowdfunded — and we’ve done very well with that — we feel very strongly that all of the money that’s coming in should be spent on game development, not on marketing and PR. We spend a little bit on PR. You and I wouldn’t be talking if we didn’t have David working for us part time. But he has a real job working for Cloud Imperium. He just moonlights with us.

As we get closer to launch, we’ll probably do some actual marketing. We’ll probably do some ads and things like that. We’re trying to leverage a lot of social media stuff. One thing we decided on is that there’s no NDA. We don’t make players sign anything, because our philosophy is, if someone wants to stream about the game, go for it.

The only thing we ask — and it’s why we have this big yellow “PRE ALPHA” thing in the corner — is that we want them to realize that we’re not done. Don’t judge us like a finished product.

Garriott: Not only are we not done, we’re much earlier than most games the public ever gets to see. It doesn’t come up that often, but it comes up now and then. Either an individual or a publication will judge us in comparison to a finished product. That’s the one thing we think is unfair.

Understand that you’re looking at something way before beta. 13 months ago, as soon as we had an avatar walking around a room — the room had a chicken in it, so we called it the Chicken Room. As soon as we had the Chicken Room, we let players play it. The players who’ve been there since the beginning totally get it. “Yesterday we only had a chicken. Today I can see a house! I can use my anvil now!” They get the flow as it gets better and better every time.

Right now, since it’s close enough to looking like a beta, a lot of people don’t realize that if you were playing a couple months ago, you didn’t have any of this. That’s the only real education we need to bring people through — how to think about this in the context of its state of development.

If people are saying, “Hey, I wish combat was this way instead of that way,” that’s the feedback we look for. That’s how we’re refining the quality of the game, by letting people tell us how.