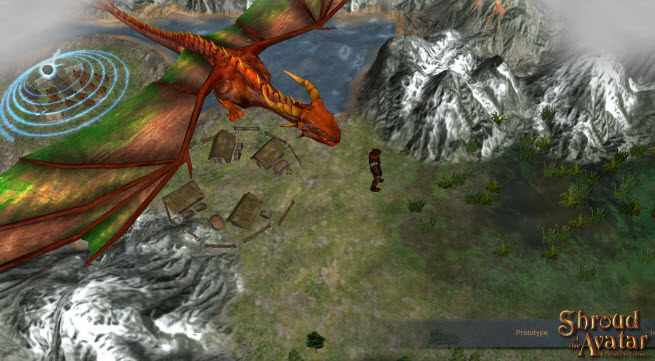 Lord British is returning today with a new role-playing game and a Kickstarter campaign. Richard Garriott (aka Lord British) is chief executive of Portalarium, and he plans to make his first RPG in 15 years using money from the crowdfunding site. 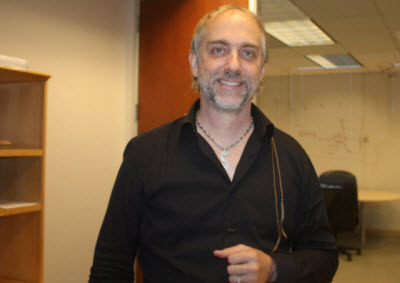 Garriott is famous as the creator of some of the earliest computer role-playing games — the Ultima series — and the first major massively multiplayer online game, Ultima Online. He tried his hand for the last few years at Facebook games with mixed results, but now he’s making a big bet on a web-based fantasy RPG, Lord British’s Shroud of the Avatar: Forsaken Virtues.

Garriott hopes to raise $1 million on Kickstarter to create a Unity-based online PC game. He can’t make another Ultima game, since he sold his company to Electronic Arts and the Ultima brand with it.

“I need to convince the public that I will make the game the core audience will love,” he said. “I want to make a story-based RPG that is the spiritual successor to my earlier work.”

The new game will feature a variety of innovations that Garriott has been cooking up over the past 15 years. It will have a new approach to multiplayer. Rather than playing with a gigantic number of strangers in the fantasy universe, Garriott will limit who you can see to people who are already your friends or might be in your circle of acquaintances. If none of your friends happens to be online while you are playing, Shroud will show you more strangers as you try to fulfill your mission.

“It is ad-hoc multiplayer, where you could start a multiplayer sequence when you meet someone on the side of the road,” he said. “That radically reduces the loads on servers, which bring every online game to its knees.” 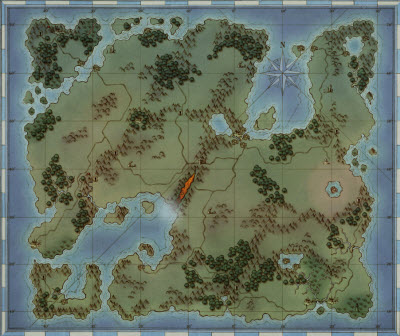 These types of ideas are unique and typical for Garriott, who is a well-known pioneer of the game industry and recognized in its Hall of Fame. Garriott has lived a full life, and now it’s coming full circle.

Garriott was an early player of Dungeons & Dragons and created his first games on paper, as dungeons. In high school, he turned in one of his stories in as a creative writing project, and he got an A. He showed off that paper and its accompanying notebook full of details of the world of Ultima in a visit to GamesBeat offices this week.

“Years before there was a computer game, I was writing Ultima,” he said.

His first computer game for the Apple II was Akalabeth: World of Doom, published in 1979 for the Apple II and sold in stores on disks in plastic bags. While still in high school, he created the game in seven weeks and made $150,000 from it. That was more than twice the money that his father, Owen Garriott, made in a year as a NASA astronaut. Garriott then created Ultima and his company Origin Systems, which he ran with his brother, Robert. They sold Origin to EA in 1992.

To make Shroud of the Avatar, he returned to that old style of writing a narrative and documenting all of the details of the world. He created the backstory, the map, and all of the magic items and their locations in the world. His artists have turned his map of the region (which he plans to call New Britannia), into a beautiful, Civilization-style map. The Forsaken Virtues episode takes place in just one small section of the world. Like his earlier Ultima work, Garriott credits J.R.R. Tolkien’s The Lord of the Rings for his inspiration.

“I am a student of Tolkien,” he said. “What I do is keep one set of notebooks as a linear story. I also record what else is in the world.” 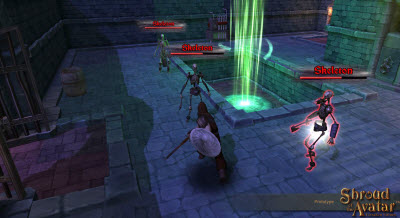 Starting with Ultima II in 1982, Garriott put his games in nice cardboard boxes with souvenirs and cloth maps. Those who donate enough to Shroud of the Avatar will receive a limited edition cloth maps of the first region.

With Ultima IV, Garriott introduced the “avatar,” a concept from Hinduism, to role-playing games. He recalled, “I wanted to make a game that judged you and your behavior. I wanted the character to be you. You were responsible.”

The idea of the avatar became a standard. In Shroud of the Avatar, Lord British again wants you to make choices that have consequences. If you go into a gypsy camp and slay the nonplayer characters, that stain on your reputation will follow you. In Shroud, you can risk your life for other characters, and if you succeed, your reputation will grow and enable you to succeed later on.

In 1997, Garriott led the development of Ultima Online, a major MMO that broke a lot of new ground. Even the sections of the world were embued with myths. When the Stranger shattered the Gem of Immortality, the “shards” broke off into different miniature versions of Britannia. Those shards are still the term for sections of virtual worlds today. 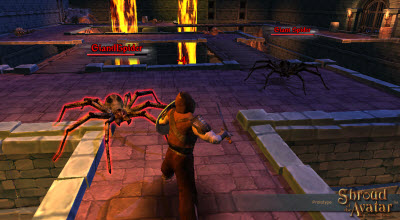 With Ultima Online, Garriott concluded that “playing with friends is so much more powerful than playing alone.”

After Ultima Online, Garriott tried to make a sequel virtual world. But that failed. And then events conspired to take him away from fantasy role-playing games for a long time.

He left EA to start Destination Games and became part of South Korea’s NCsoft. There, he embarked on what should have been his greatest accomplishment. Garriott spent seven years creating the sci-fi MMO Tabula Rasa. It launched in 2007 but failed to garner a sustainable audience. In 2008, he left NCsoft and took a hell of a side quest.

Following in his father’s footsteps, he invested in a commercial space ventures, Space Adventures, and signed up to become the first private citizen to fly into space. But he lost a lot of wealth in 2001 after the dot-com bubble burst, and he sold his seat to Dennis Tito. But after Garriott left NCsoft, he went to Russia and trained to be an astronaut aboard a Soyuz rocket. He flew into space with his father coaching him. The whole remarkable journey cost him $30 million, and this adventure was chronicled in a documentary, Man on a Mission. 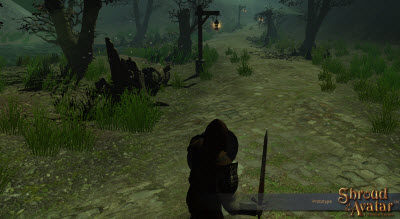 After he returned, he won a $28 million judgment against NCsoft for breach of contract. NCsoft forced him to sell his stock within 90 days rather than allowing him to do so over 10 years as his contract stipulated in case he were fired. Garriott used the money to start Portalarium, with a focus on Facebook games. Portalarium raised funding and made social games for poker and collecting. But the collecting game, Ultimate Collector, hasn’t been published yet because it’s stuck in development iterations with its publisher, Zynga. The publishing process has taken so long that Portalarium had to lay off some of its staff.

Returning after a 15-year gap

Meanwhile, Garriott has plotted his return to fantasy RPGs and is launching the Kickstarter to fund the venture.

“By going to players, I won’t have that external pressure from publishers,” he said. “The pressure I have is from the players and that is a good thing.” 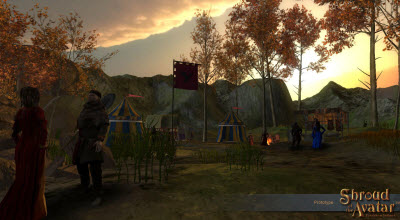 But he is approaching it in a different way from other competitors. He planned the whole world at once and then broke it into different regions, or maps, that his developers can set off as separate episodes. He will take the risk out of it by publishing it one episode at a time. If the players like the first episode, he can make more. But if they don’t, he can cut his losses.

“It has the best qualities of MMOs, so I won’t have to spend three to five years on it making a game that nobody likes,” he said.

In Shroud’s story, the bad guys are proactive. They aren’t just waiting at the end of the game for you to take them down in a “boss” battle.

“That, to me, is an unfulfilling story,” Garriott said. “You are not a very good protagonist and the bad guy is not a good antagonist.”

Rather, the enemy is attacking the world with skeleton warriors and other creepy things. They are going to villages and burning them. Your job is to go to the villages and save them. To do so, you’ll have to take out the skeletons and their trebuchets and other dark creatures.

You can pick your own home village, buy a house, and equip it with wares such as a piano that actually works. The world’s economy is set up so that the value of your real estate can actually rise, as villages, towns and cities will have prime locations that everybody will want to own. Large guilds might come in to purchase the largest lots jointly. 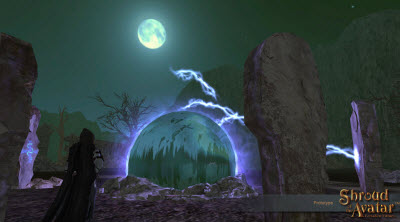 But if the enemy attacks your village, you can’t access your home while it’s under siege. You and your friends have to break the siege and liberate the town. Before fighting, you train to gain combat skills. And when you enter battle, you tap some of the skills as appropriate, based on the enemy at hand.

Garriott considers all of these design elements to be advantages for his world, which he plans to make playable this year and then launch formally next year.

He’ll have a tough time taking on the mother of all MMOs, World of Warcraft. But Garriott believes his approach is different enough. 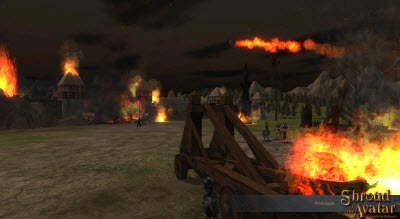 “I think it’s a good time for me to come back and make this game,” he said. “MMOs are beautiful, but they have not progressed.”

Shroud of the Avatar: Forsaken Virtues gameplay video from VentureBeat on Vimeo.