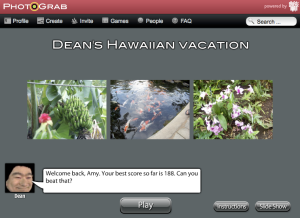 I’m not a game designer. But imagine a game creation tool so simple and easy that even I can’t mess it up. Shufflebrain has created this tool as part of a game that transforms photo viewing into a fun experience. Within a few minutes, I created a pattern-recognition game using a template.

The game, called Photograb and available for now only on Facebook (You can link to my game if you have a Facebook account) is simple, fun and — its creators say — good for your brain. It’s the brainchild of Amy Jo Kim and her husband Scott Kim, a pair of veteran game designers who have worked on a ton of hits separately before working on the Los Angeles-based company together.

It’s the first in a series of games that will help sharpen your mental faculties, and it taps into the Web 2.0 craze for user-generated content. You create a game by selecting three of your photos from an album on Facebook. Then you move the mouse cursor over the picture. The cursor becomes a half-inch diameter circle. As you move it across the picture, you click it about ten times. If you like what you’ve done, you save it. 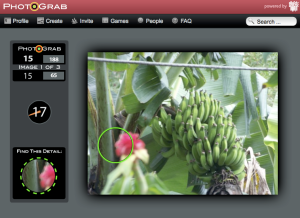 Then you can play the game against a 24-second ticking clock. You get a circle that has a tiny slice of the photo and you have to find the spot in the photo that the circle is taken from. If you find it, you click the mouse and then the game tells you if you hit the mark exactly. The more accurate you are, the more points you get. It’s actually pretty tough to get them all right. But you’ll feel a little sharper after you finish. It’s easy to play, difficult to master.

Amy Jo Kim, who got a doctorate in neuroscience, says the game helps with pattern recognition, much like the Nintendo DS game “Brain Age,” which with a sister title has sold more than 26 million copies since 2006.

“This is like Brain Age meets photo sharing,” Amy Jo Kim said. “They sharpen your brain. But we’re fun first, good for you second.”

The fun part is that you can make a game out of sharing photos with your friends and see who can make the most-played or highest-ranked Photograb game. The game fits with the passion of the Kims: to make games that embrace the physical world and that appeal to non-gamers. 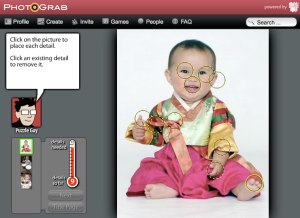 Amy Jo Kim said she believes strongly in “Funware,” the term coined by another game industry veteran Gabe Zichermann, CEO of New York start-up rmbr, for the use of game mechanics (things like leaderboards, rewards, competition) in non-game applications. Facebook itself is a good example; it’s fun to compete to see who can get the most friends on Facebook.

Lots of start-ups such as BunchBall see opportunities in making ordinary web sites more exciting by infusing them with game dynamics that keep site visitors engaged for longer periods. It’s a very common ambition these days, so much so that Bing Gordon, former chief creative officer at Electronic Arts and now a partner at Kleiner Perkins Caufield & Byers, refers to it with his own lexicon, “video game design thinking.” 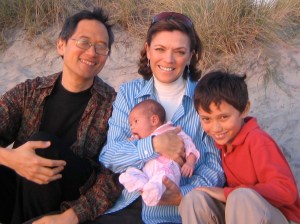 The next game in Shufflebrain’s line-up is Word Stream, aimed at helping short-term memory. Like Photograb, the game will be deeply social. Amy Jo Kim says that the thing both games have in common is that they are engines for gamers to create their own games.

As I mentioned, the games are clever and they reflect the deep experience of the Kims. Scott Kim is a famous puzzle designer who created all of the puzzles for games such as “Bejeweled 2.” Amy Jo Kim worked as a consultant for Electronic Arts’ Maxis division on games such as “The Sims.” She also worked on titles such as “Rock Band”, “Ultima Online,” and virtual world There.com. Among those who have sung Amy Jo Kim’s praises is “Spore” creator Will Wright. The Kims worked together on mobile games for Limelife and Disney, as well as The Sims Online.

The Kims’ focus on brain-improvement games reflects a popular trend. Other companies working on educational, brain-enhancing games include Lumos Labs, Happy Neuron, Vivity Labs (FitBrain), Posit Science and MindFit. This past June, Lumos Labs raised $3 million. The interest in this subject shows that the Kims are on to something hot.

Shufflebrain has been a consultancy since 2004. The company now has the Kims and a handful of contractors. It raised a seed round of funding from Lightspeed Venture Partners about six months ago. The Kims will see how their first game does and then decide how to expand. They’re considering doing a venture round, and they expect to launch a virtual goods model for Photograb.

Amy Jo Kim says she and her husband love being in a company that can be small and nimble. They like the start-up life, Amy Jo Kim says, “because we are intensely creative people.” How much you want to bet them kids in the picture grow up to be game designers?