Electronic Arts figured out digital and mobile in 2014.

The publisher reported that it made $2.18 billion in digital revenue last year. That is a record for the company, and it makes up about half of the $4.34 billion it generated during the 12 month period. For EA, the digital revenues came from mobile hits like Madden NFL Mobile and SimCity BuildIt. But the company got strong digital sales from its full console and PC games as well as add-on content for console and PC games like FIFA 15 and Madden NFL 15.

SimCity BuildIt in particular racked up a strong performance to finish off 2014. It debuted on iOS and Android in December, and it quickly surpassed 22 million downloads. EA pointed out that it was one of the top five most downloaded games in more than 100 different countries. 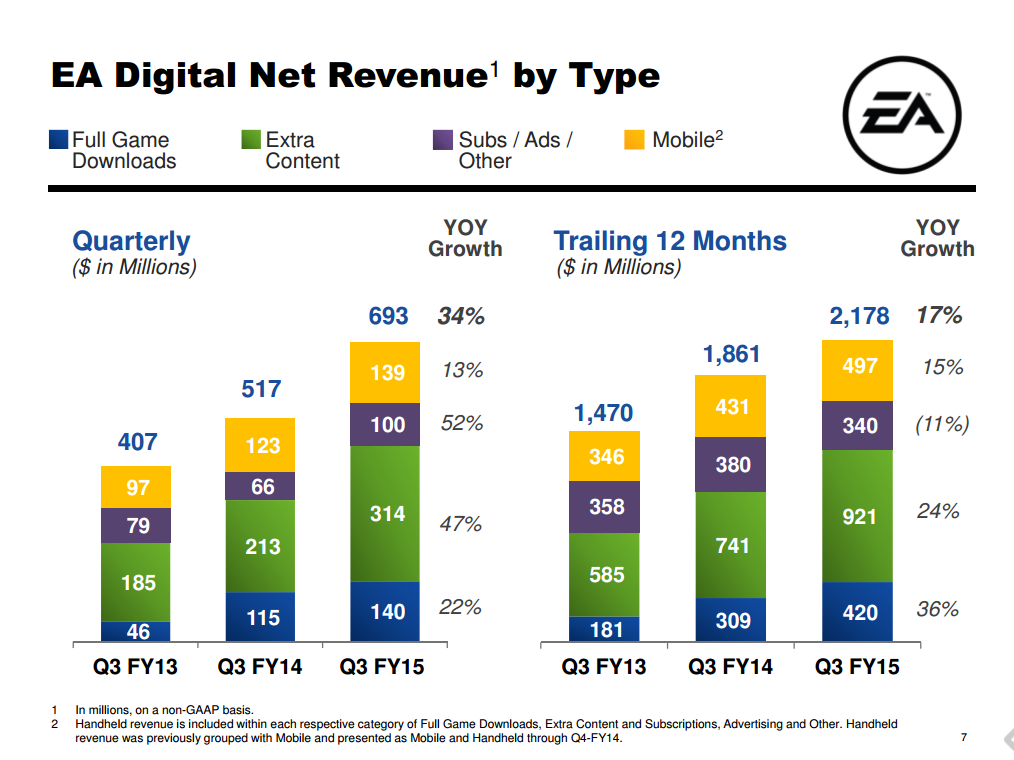 Above: A break down of EA’s digital sales.

EA also saw major progress with its FIFA, Madden, and Hockey games on mobile. For 2014, the company shifted to a free-to-play model for those, and this helped each of those games attract more players than ever before. Madden NFL Mobile and FIFA 15 Ultimate Team together have 45 percent more monthly active players than the previous versions of the games had at the same point in the previous year.

For its fiscal Q3, which ended Dec. 31, EA had $693 million in digital revenue. That is up 34 percent year-over-year. Of that total, $139 million came from mobile, which is up 13 percent from the same period in the prior year.

EA’s subscription segment saw the biggest growth of 52 percent from $66 million in Q3 2014 to $100 million during Q3 2015. That is likely due to the introduction of EA Access subscription service on Xbox One, which charges gamers $5 a month for discounts and game downloads at no extra charge.

Digital downloadable content also saw a huge increase in sales to $314 million in Q3. That’s up 47 percent year-over-year from $213 million.