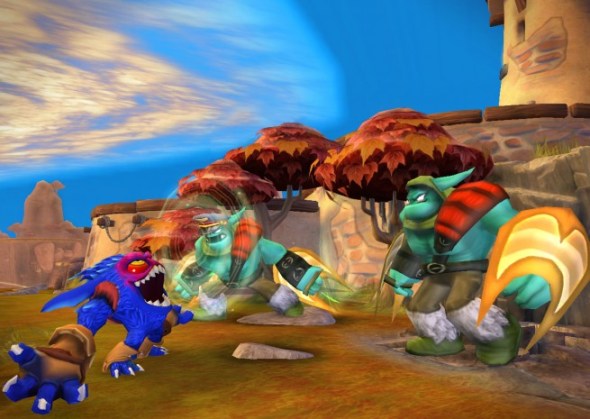 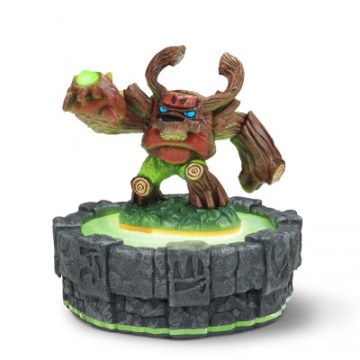 Video quality
Something is terribly wrong with the cutscenes in the Xbox 360 version of Skylanders Giants. Prerendered video, in theory, should look better than regular gameplay, but cutscenes in Giants looks incredibly grainy and over-compressed. I’m not sure if this is something Activision can fix after release, and it’s a big disappointment since the rest of the game has such a high level of polish, including the cast and character designs.

Other times, textures in levels occasionally look very muddy, especially during in-engine cutscenes where characters are explaining objectives. This issue ran rampant during the Willikins level, where you are constantly flipping back and forth from a bright, cartoonish world to one without much color. Perhaps the colorless world should look disjointed, but I don’t think the grass should look like jagged pixel shards. 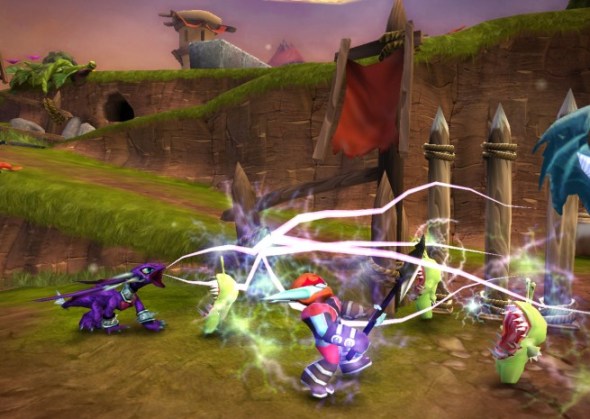 Shopping
This might be a holdover from not liking the Moneybags character from Spyro: Ripto’s Rage, but Auric the traveling shop keeper is just as obnoxious as Moneybags ever was. I suspect that they’re actually the same character given just how close their digital models are, but that’s not what makes shopping a hassle in Skylanders Giants.

Many hats and heroic quest options are now locked behind Auric’s infuriating pay wall. You can also buy keys to power through “difficult” locked doors and pay to upgrade your Skylanders while you’re in the field. This all seems very convenient until you realize that unlocking the items Auric sells takes a hefty amount of money that you’ll need to upgrade your Skylanders in the first place.

Given that each Skylander keeps track of its own wallet and that you can’t transfer funds between them, unlocking new items can become very tedious. I’d much rather unlock new accessories and heroic challenges by playing and exploring rather than endlessly grinding to get the 10,000 gold required for some items.

Chatty Skylanders
If you’re easily annoyed by repetitive dialog, it might be a good idea to turn down the volume when playing Skylanders Giants. Everyone talks now — some characters more than others.

When changing out characters, they always announce themselves with a punny bit of dialog like “be afraid of the bark” and “fear the fish.” That might be cute once or twice, but after swapping a few figures, this gets very irritating, especially since three different Skylanders make puns about fearing the dark.

Skylanders also have a tendency to constantly loop their dialogue. Trigger Happy, the manic, gun-toting loot fiend from the first game, is always shouting “mine mine mine” followed by bursts of insane laughter. If you are in an intense combat situation and gaining lots of gold because of it, Trigger Happy is perpetually shrieking and laughing. It got so bad during one level that I banished the toy from the rest of my review play sessions.

You can tell Skylanders is a game designed for children, but if you’re going to couple talking with performing actions in the game, please add more than one or two lines of dialogue.

If Activision and Toys for Bob can expand and develop Skylanders’ depth for every release and maintain toy compatibility, then a new game every year doesn’t sound half bad. Skylanders Giants adds much-needed depth to the previous game’s design and encourages you to play repeatedly by offering new challenges and difficulty levels.

Despite all the advances, Giants suffers from poor video quality and characters who jabber incessantly. Younger players might not notice, but new gamers coming to the franchise could find it grating to listen to the same line of dialogue over and over only to get a cheesy-looking cutscene as a reward for their patience.

Skylanders Giants launches October 21 on the Xbox 360, PlayStation 3, 3DS, and Wii. Activision provided GamesBeat with a 360 version and additional Skylander toys for this review.