You may have felt like your bank account might finally be recovering from the first two Skylander installments (not to mention Disney Infinity trying to muscle-in on the toy/video game crossover craze). Your reprieve, however, was short-lived; Publisher Activision is bringing Spyro and friends back in Skylanders Swap Force, available Oct. 13 on PlayStation 3, Xbox 360, Wii, Wii U, and 3DS. This time around, the body-switching Swap Force characters join all of your favorites from Skylanders Spyro’s Adventure and Skylanders Giants in a vastly expanded and improved version of this colorful, kid-friendly dungeon-crawler.

While the titular Giants from the previous entry provided some hard-hitting muscle, often at the cost of speed and mobility, the new Swap Force characters emerge as clearly superior to both the regular Skylanders and their hulking cousins. With top and bottom halves that can both be upgraded separately and then swapped (via clever modeling and small but strong magnets), the Swap Force figures give you hundreds of combinations with which to construct your own favorite Skylander.

Skylanders Swap Force also brings a whole host of improvements to the first two games and so much extra content that even the most dedicated players will have a hard time completing it all before the next, inevitable sequel. New movement options that are specific to the Swap Force figures (flying, climbing, digging, and even teleportation, to name a few) provide a wide variety of challenges such as climbing walls, flying through rings, and bouncing between floating islands. The addition of the Portal Master leveling system — a sort of self-contained achievement system that awards stars, which increase your level and unlock even more rewards — offers both incentive and an easy way to track your progress through the main game itself and the truckloads of collectibles, bonus levels, and additional gameplay modes. 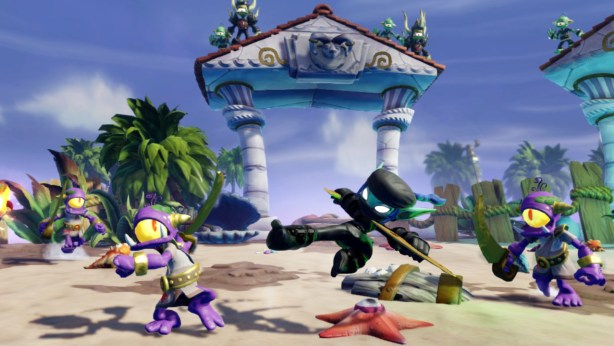 The addition of a jump button to Skylanders opens the series up and improves it in so many little ways. Exploration now feels fully three-dimensional, and it’s much more satisfying (and sometimes even more challenging) to find all the little nooks and crannies where the next collectible items are lurking. What might have been a dead end in one of the previous Skylanders titles may now be a small gap you can jump over to reach a hidden ledge full of treasure or a pile of crates you can climb to find that last Soul Gem you need to purchase your character’s final ability. Careful explorers will also find alternate routes around dangerous environmental hazards, which can save you a lot of health.

Combat also takes on a new dimension with the ability to hop around the screen. This makes your character more mobile and easier to gain a favorable position with, and many boss battles now have ground attacks which you can (and should) jump over. If you were previously a fan of fast, melee-oriented characters like Stealth Elf, you’ll practically giggle with joy with how much more nimble — and deadly — you are on the battlefield.

Jumping also opens up the possibility for many more types of bonus levels without relying on the old bounce pads from the first two games. The developers clearly took advantage of this, and you’ll be delighted to find additional content such as two-dimensional platforming segments with bouncy mushrooms and lots of coins to collect (a clear nod to classic Super Mario Bros.), and speedy, on-rails segments with stomach-dropping jumps you’d expect out of a Sonic the Hedgehog title.

More content than you can shake a controller at

I always thought that Activision staggered the release of the physical toys to give you something to do with the game months after you had exhausted all of your other options. I’m not sure this is strictly necessary this time around. Most other games out right now don’t even come close to the level of content packed into Skylanders Swap Force.

The levels themselves are much bigger, and each one typically contains at least three extra areas locked behind elemental gates (which you need a matching Skylander to open) and at least one Swap Force movement-based challenge. If you approach these in a methodical manner, trying to explore every nook and cranny for hidden collectibles, it’s very probable that you will spend more than an hour in each story level. 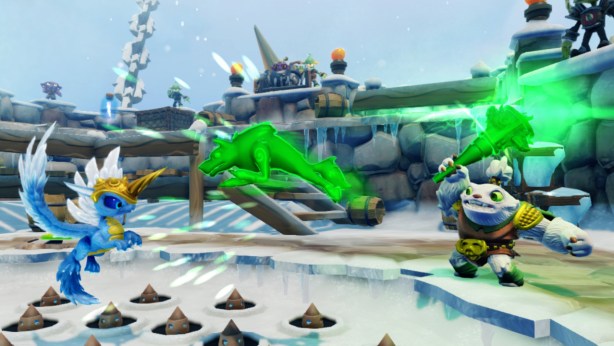 Above: Whirlwind and Zoo Lou battle in an arena.

Then you have the hub area, which is a giant, arboreal city in which you’re constantly unlocking new areas to explore, vendors to purchase items from, and places to store the legendary treasures you collect as you progress through the story. This is almost another game unto itself. Add to that the extensive list of bonus content, which includes but is not limited to hat collecting, legendary treasures, charms, bonus mission maps, story scrolls, level-specific challenges, swap zone challenges, solo and team-survival challenges, accolades, battle arenas, and time attack and score modes, and you’re almost never at a loss for something new and interesting to do.

Oh, and on the off-chance that you actually do get bored, there’s always fishing.

Developer Vicarious Visions apparently listened to a lot of fan criticism this time around. In addition to allowing all the Skylanders to jump, it instituted several other convenient and welcome changes. One that popped out in the first few moments of co-op play is that all money gathered is shared between both players. No longer is the game a competition to see who can snag the treasure first. This allows you to focus more on the actual fun parts of the game and helps less-experienced gamers upgrade their characters at the same pace as their older siblings or parents.

The movement-based challenges that frequently appear in the middle of levels also restore all of your health on success or failure. This both gives a welcome boost when you’re in the middle of one of the much-longer levels in this installment and actually rewards you for taking the time to give these mini-games a try. It also makes those “complete the board without losing a Skylander” challenges a little less tedious.

Another “why didn’t we think of this sooner” improvement: midlevel upgrade stations. Since it can take you a lot longer to get through one of Skylanders Swap Force’s levels, you’re not forced to wait until you’re done to reap the rewards of all that treasure you’ve been gathering. Numerous strategically placed upgrade stations enable you to see more immediate results for all of your hard work. 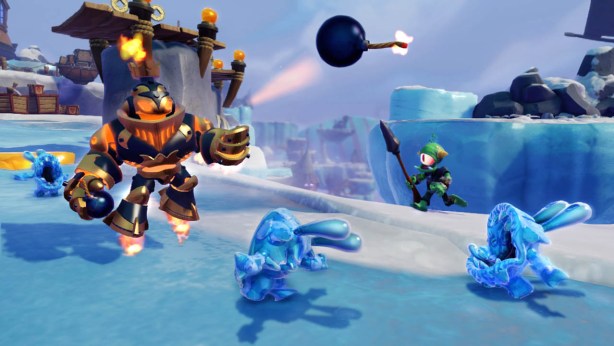 The visuals also received a noticeable and needed upgrade. Everything looks vibrant and more detailed in the in-game engine, and the cutscenes no longer look like they were rendered on a console from the previous generation. This brings the Skylanders franchise much closer to what you would expect on today’s high-definition systems.