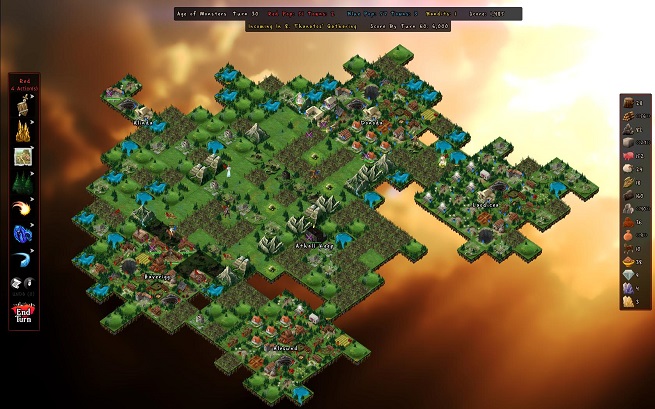 In Arcen Games’ Skyward Collapse (a turn-based strategy game for PC), I am The Creator, but I am not like any god that you may have played in a video game before.

I do not rain fire and brimstone; I do not flood the Earth for 40 days and nights; I am not a jealous super being concerned with the daily trivialities of human existence; I do not care what people think of me.

I have but one task as the wizard above the clouds: to balance the warring factions of the Norse and the Greeks. But I am not content to merely isolate these tribes from one another or from bandits or any other danger. Peace and comfort is not my goal. In fact, I take great pleasure in their conflict and their bloodshed. But I don’t want to see them exterminated.

You might say that I “work in mysterious ways.” Maybe I just have an odd sense of humor.

Skyward Collapse offers a unique twist on a stagnant genre
God games, traditionally, have been mostly concerned with direct intervention, such as meticulously shaping terrain to suit followers’ needs or using powers to initiate miracles to the advantage of believers over non-believers. Skyward Collapse has a handful of such actions, but they’re limited in scope and power, such as “smiting” a single land tile or repairing a human structure. 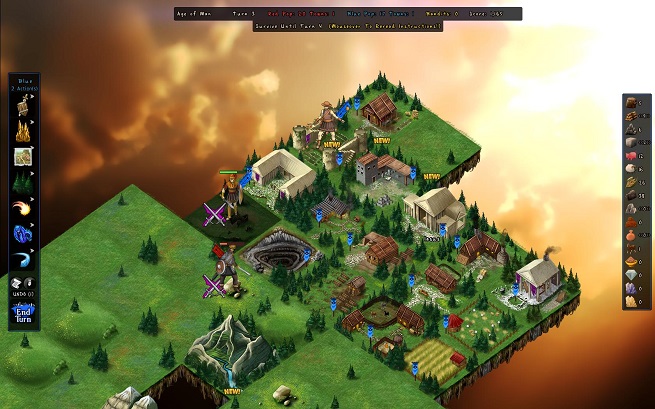 Most of my involvement is indirect; I can construct pig farms or rock quarries or iron mines that the Norse and the Greeks will use to extract raw resources. I can give them butchers or stone masons or smithies so that they may turn those resources into finished goods. And from there, they can choose what kinds of soldiers they will train and what weapons they will build to murder the people of the opposing side.

Those armies act of their own free will, and when the warriors of one faction manage to kill all of those on the other, they will not stop there. They will continue to plunder the opposition into ruins, which become permanent fixtures on the land that limit my ability to help the losing side.

I can drop in mythological creatures — like Centaurs, Valkyries, Giants, or Elves — to hopefully correct an imbalance on the playing field of life. But like their human counterparts, they too have free will and thus act accordingly. In other words, the Minotaur that saves the Greeks may initiate the demise of the Norse.

Compounding all of this are Woes. Sometimes, vanity will get the best the Greeks and the Norse, and their soldiers will wander endlessly and without direction as bandits plunder their homes. Other times, a great flood will cut off town centers from one another, or the floating landmass on which everything exists might suddenly begin falling away piece by piece. Like the free will of my subjects, not everything is within my control.

Even more stubborn than humans or creatures are lesser gods who will appear as the game progresses. These lower deities will not act at all unless bribed with resources that require a significant effort on my part for the human factions to accumulate. And after they do intervene, they can leave lasting and sometimes permanent effects on the world similar to the Woes.

But I do want to see the Greeks and the Norse kill one another because I have score goals to meet. Each of the three Ages (The Age of Man, The Age of Monsters, and The Age of Gods) requires that I reach a particular score by a certain number of turns. The only way to increase my score is to let these two human tribes duke it out.

And I can’t let one side completely eliminate the other — that would certainly end the only entertainment this lonely god has. So I intervene to give each side the resources to hold their own but never enough that one could finally end this eternal struggle. A truism about life lingers somewhere between the lines of code. 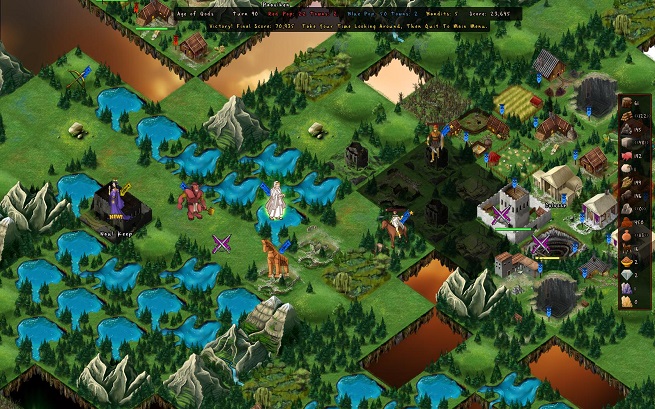 The user interface is stingy with details
I need to keep track of many numbers in Skyward Collapse. Raw resources and finished goods accumulate in a panel on the left-hand side of the screen. For some of these, a particular faction can share them globally between all of its town centers. For others, only the specific town that produced them can use them.

This is all nicely explained in the tutorial brief, but keeping track of this shifting data as the game progresses isn’t always easy. My only option is to mouse over each individual resource one at a time, and even then, I only have access to simple gain, spent, and net sums.

Since I have to contend with humanity’s free will, the Norse and the Greeks will take resources to build their own armies, but I don’t have any easy way to see what they’ll take on a town-by-town basis before I end the turn. Sometimes I’ll study the resource panel just trying to figure out why I can’t get my lumber cache to increase despite building carpenters and woodcutters, for instance.

I’d really like to see the kind of detailed information breakdown that I’m accustomed to in a game like Civilization IV applied to Skyward Collapse. Where’s my lumber going? My steel? What are the Greeks building next? Shouldn’t I know this stuff as an omniscient god?

Skyward Collapse is about balance but not just in the sense of your ability to keep two sides from murdering one another. Skyward Collapse is also about finding equilibrium in the downward spiral of chaos in a world that you can only influence and not control. It brings real innovation to a genre that’s seen little significant deviation from 1989’s Populous.

Speaking of which, Populous creator Peter Molyneux is back in the ring with his upcoming Godus, a “reinvention” of that genre-defining game. Thanks to Arcen, he now has a tough act to follow.

Arcen Games’ Skyward Collapse released for PC on May 23.