Mega Crit Games’ addictive roguelike deck-building game Slay the Spire has seen a ton of success in Steam Early Access. The indie studio’s debut effort is one of the top 100 most played games on the platform, and it’s sold over 700,000 copies, according to Steam Spy data from up to the beginning of this week before the site had to shut down. The team plans on releasing the full version on PC either in late summer or early fall this year.

Slay the Spire has three levels, and each has several different procedurally paths that players can take. Each route ends in a boss fight before they can move on to the next level. Along the way, they traverse rest sites, rooms with random encounters, enemies, and merchants. Players start off with a few basic cards in their deck, and after each battle, they can add some more. Relics also contribute an interesting twist — these have an array of different effects, like debuffs or buffs or randomizing card cost.

Mega Crit worked on the game for two and a half years before launching it into Early Access in November. It took a couple of weeks for it to gain a following, and when it did, the players came from a market that the studio hadn’t been counting on: China.

“A lot of what you see in gaming is you hear—you’ll make the majority of your sales in two weeks and then you’re on to the long tail after that,” said Mega Crit founder and Slay the Spire creator Anthony Giovannetti in a phone call with GamesBeat. “Usually, for most games, it’s that first two weeks or whatever that decides if your game will be profitable or not. For us, our first two weeks were nothing, and then we blew up from there.”

Giovannetti initially sent out codes for the game through Keymailer, a service that enables publishers and developers to connect with streamers and other folks who may be interested in their game. He also cold-emailed several people, but he didn’t get much of a response. Then a popular Chinese broadcaster picked up the game, and suddenly, Slay the Spire blew up in China.

“For a while we had more Chinese players than the entire rest of the player base combined,” said Giovannetti. “And then from there things just started compounding. Because the game works very well on Twitch, more and more streamers started organically picking it up, and we spread through a combination of word of mouth and streamers and YouTubers. It was pretty crazy.”

Popular streamers like Northernlion helped boost the game’s visibility, and as more players picked it up, it became the second most-downloaded Steam game at the end of January. And a bigger fanbase meant more data to sift through. 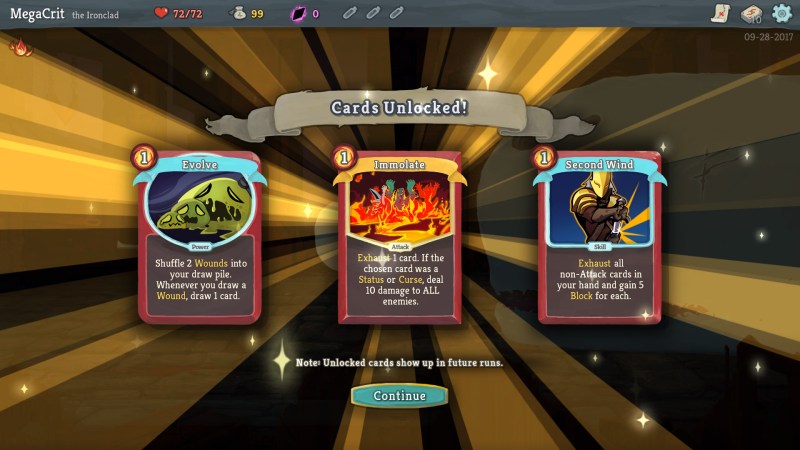 Above: After a battle, players can choose one of three cards to add to their deck.

Mega Crit built its own analytics tool using the cloud platform Heroku, which grabs data on how players are building their decks, their success rates at beating the game, and which cards they’re gravitating toward. This has been crucial as the team goes through and balances different aspects, like how strong the enemies are or card abilities.

“We compare data to previous periods, and over time, we’ve built up a bunch of filters and graphs and other things,” said Giovannetti. “As we’ve wanted to ask more and more questions, we’ve improved our metric logging to answer the questions we wanted to have answered during the balancing process. By now it’s second nature, because I’ve been doing it for more than two years. A lot of it is just in representing the data visually, so you can quickly, intuitively understand it when you look at it. It’s been incredibly useful. It’s really important, even for indies, to use these kinds of tools.”

Another tool Giovannetti and his team uses is a bot that enables them to collect player feedback. Now that the game has thousands of players, the studio has been slammed with a lot of information that can be hard to parse. The community can submit notes and tag them with keywords with “bug” or “feedback.” These let the bot know to save that info into a sheet for the developer to review.

“Any player can go into our Discord and submit a bug,” said Giovannetti. “They just say ‘bug’ and type out whatever it is. Our bot will collect it, store it to look at later, and we try to go through and look at everything that’s been filed by everyone. Now, there’s so much that it might take us a long time to see what somebody said, but we try to at least look at everything and then give it a priority and put it in a to-do list if we think it’s actionable, if we agree with it.”

These are both tools that the studio used before it launched in Early Access, so they don’t mark much of a change in the way it’s approaching development. One big shift in strategy, though, came from Slay the Spire’s boom in China. The game still has more Chinese players than American ones.

“We were initially thinking, OK, we’ll launch in Early Access and then after Early Access, we’ll go get it all localized,” said Giovannetti. “Everything will be nice and clean then and it’ll be easier. But when that happened, we said, oh shoot, most of our player base—English is their second language. We said, OK, we need to jump on this and get going. We rushed to immediately get some localizations in.”

Mega Crit initially did this through localization companies, but it was hard to keep those translations updated because the studio pushes out weekly patches and changes to the game. So it turned to its community, which now translates the new content every week so that it’s always fully available in Chinese. 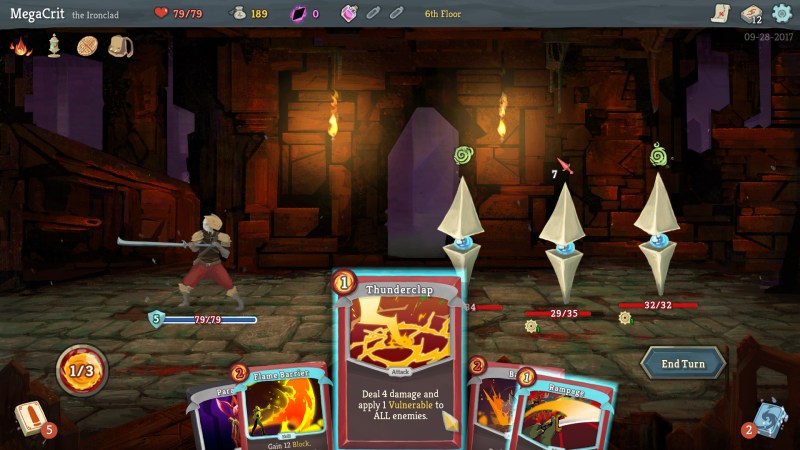 Above: The Ironclad in battle against elite enemies.

Slay the Spire has a fervent community, which is something that Giovannetti has experience with. He’s always been passionate about card games, and he started and ran the NetRunner fan site StimHack. It was through that community that he met a lot of top NetRunner players, who he recruited to help playtest the game.

In the Slay the Spire community, modders have added new character classes. The Early Access version only has two official ones available — the hard-hitting Ironclad and the cloak-and-dagger Silent. But thanks to these PC tinkerers, players can try out new characters like the Necromancer and the Seeker.

Giovannetti says that modding is great, especially for roguelike games that rely on replayability. Mega Crit has even adapted one of the mods that a community member made — a Twitch integration that enables viewers to vote on which cards the streamer adds to their deck. The modder dropped it into the studio’s Discord channel and the studio got permission from them to add it officially into the game, which took about a day to do.

“We think modding is really cool. We fully support it,” said Giovannetti. “I want to actually put better mod support into the game. We do plan on doing that, but probably not during Early Access, or at least not until the core game experience is done, the third character’s out, all that stuff. Then we might do a Steam Workshop integration and stuff like that to better support it.”

A third official character is something that players have been waiting for, and the Mega Crit team is keeping mum on details about what it might be. But it’s hoping to roll it out on the beta branch by the end of the month, so the wait might be over soon.

Once Slay the Spire launches in full, the studio plans on adding new content. It has more characters and potentially more map ideas in mind — not necessarily additional levels, but players might potentially be able to access side areas or alternative levels. Currently, players go through the same three areas before eventually reaching the final boss.

An often-requested feature is a draft mode, where players can select their own deck before embarking on their dungeon crawl. It’s something that’s been a big hit in the game’s Daily Climb mode, which mixes different modifiers and presents players with a new challenge every day. These modifiers include things like starting people off with 50 cards in their deck or giving them a relic that increases their strength every time they obtain a Curse card, which are usually negative cards that can inflict damage to the player.

“[Drafting has] been really fun and popular,” said Giovannetti. “I know a lot of people have requested it as a separate mode, so that might happen in the future, but I also know from looking at the data we have on it now that it’s really, really powerful. If I did add that as a mode, we’d have to add some drawbacks to it, because it’s incredibly strong to draft your initial deck.”

Slay the Spire still has a couple months in Early Access, but so far the team is doing everything right. It’s engaging the community, and it’s developed an addictive game that has the potential for tons of new fan-created content.