Sliver.tv has teamed up with livestreaming service Twitch to launch Tilted Trivia, a mini game that can be embedded in livestreams.

It’s kind of like HQ Trivia, but for esports fans, and it is meant to keep fans engaged with player livestreams for a longer period of time. The game from Sliver.tv is a new extension for Twitch’s platform, and it adds interactivity to livestream pages. The goal is to drive new revenue streams and rewards for streamers and viewers alike.

Sliver.tv’s Tilted Trivia game is now available to all Twitch streamers and will run throughout Twitch as an overlay to streams. Users will be able to play live by contributing currency known as Twitch Bits, and they can compete by answering a variety of trivia questions tailored to the streamer and the game they’re watching.

The game will feature over 3,000 curated trivia questions for general gaming, esports, and top games like Fortnite, League of Legends, Counter-Strike: Global Offensive, PlayerUnknown’s Batlegrounds, Overwatch, Grand Theft Auto V, and Hearthstone. The top 3 ranked participants will be announced live and featured on the streamer’s leaderboard for bragging rights on Twitch.

“Sliver.tv’s platform is incredible. It allows my viewers to be much more engaged and invested into my stream,” said top Twitch streamer Erik ‘Fl0m’ Flom, who has over 18 million views and 340,000 followers. “Sliver.tv’s provides the ability to watch and win prizes by just doing what they would normally do. What has me most excited for Tilted Trivia is that this same increased engagement will be directly brought into Twitch through the extension. A second added benefit is my viewers and the Bits they use directly support me while participating in the trivia and competing for the top of the leaderboards. All you have to do is enable the extension and let the fun begin.” 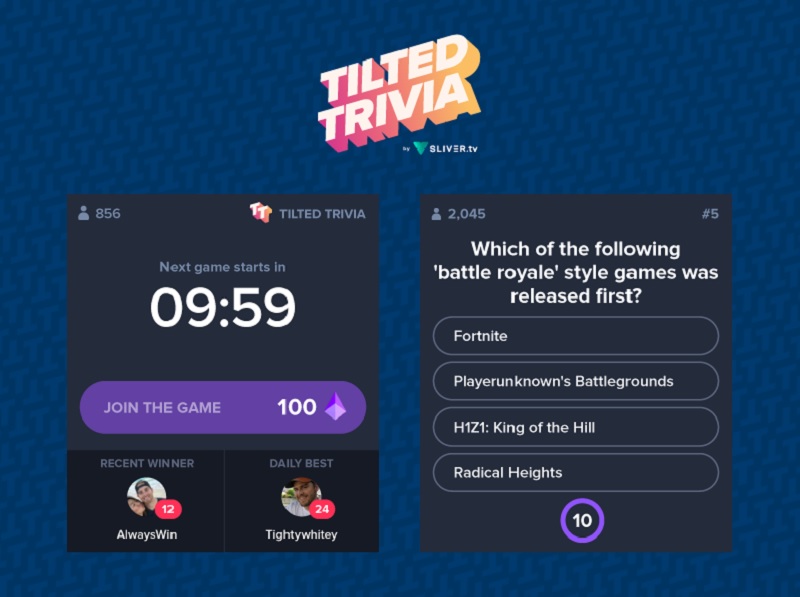 Above: Tilted Trivia is like HQ Trivia for esports fans.

“As we built Sliver.tv to over five million monthly visits, we learned that interactive trivia games are highly engaging and capture the attention of viewers,” said Mitch Liu,  CEO of Sliver.tv and Theta Labs. “Our users earn free virtual coins for prizes by watching streamers and actively participating in trivia, raffle contests and live polls, leading to session times that clock in at up to 40 percent longer. Tilted Trivia represents the next evolution of this engaging platform, and we’re excited to enable thousands of streamers to deepen their relationships with Twitch’s 100 million monthly active users.”

“We learned on Sliver.tv over the last six months that interactive trivia and polls really engage the esports audience, sort of like a ‘HQ trivia for esports,'” Liu said in an email. “Our partnership with Twitch brings this platform right into the live Twitch UI and experience for 100M+ Twitch users. Twitch streamers that run our Tilted Trivia game extension can earn Twitch Bits as an additional source of income. We think this will significantly add to their earnings potential for both large and long-tail smaller streamers, who have often struggled in the past.”