The Nintendo GameBoy library is a sweet chocolate box of retro gaming: little cartridges containing quaint, meticulously machine-coded 8-bit treasures. It would be a shame to see these games become lost and forgotten in time.

Doing its part to make sure that doesn’t happen, Hyperkin has launched the SmartBoy (available now for $50), a smartphone accessory that hooks up to any handheld Android device with a native Type-C USB port and enables you to play the gems of the GameBoy catalog. All that’s needed is an original GameBoy or GameBoy Color cartridge to slide into the unit.

Being the local retro-snoot, and avid fan of the GameBoy platform, I eagerly took it upon myself to give the HyperKin SmartBoy a test run! 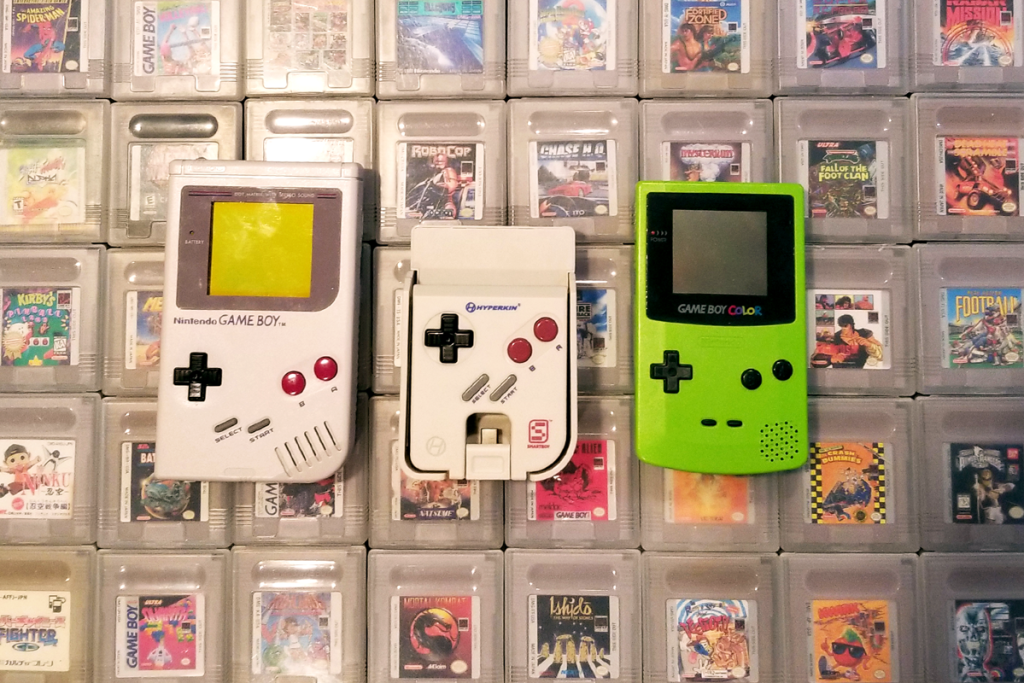 Above: SmartBoy and the GameBoys.

Keeping the GameBoy accessible and viewable

I like Hyperkin’s main product, the modern retro-console called the Retron, because it takes advantage of something most people have in their modern living rooms: an HDMI display. The SmartBoy has a similar philosophy, using what a lot of people have in their pockets: a smartphone display.

This is a really cool idea because man, if there is one thing that has vastly improved over the decades since the original GameBoy, it’s portable screen technology. With a modern display, you don’t have to adjust lamp shades to get light to hit the screen just right or tilt the GameBoy in an awkward angle just to get the sprites to become half-assed visible. You get a game going on the SmartBoy, and voila — beautiful and clear GameBoy graphics.

There’s also a long-term benefit for the GameBoy library, in that the SmartBoy keeps the platform accessible. GameBoy hardware isn’t exactly difficult to get a hold of but neither is a smartphone. Something like the SmartBoy could help ensure that these games will be playable for a long time.

The SmartBoy’s style looks like the white brick GameBoy (known as the DMG model), but the unit’s width and D-pad/button placement are more in line with the GameBoy Color — making the control space a bit smaller. So, if you grab a SmartBoy and remember the original GameBoy feeling a tad bigger, it’s not just because you have huge adult hands now.

The buttons and D-pad feel close to the original brick GameBoy unit, making me wonder if Hyperkin sourced these from the same manufacturer Nintendo used. Sensitive hands are going to pick up on a slightly stiffer sensation to the controls, but I chalk that up to comparing new buttons to a 30-year-old, heavily used, GameBoy. The SmartBoy also has two mysterious triggers toward the top, suggesting support for other platforms in the future.

In order to hold the phone in place, Hyperkin employs a spring-loaded side-wall system, which hugged a Samsung Galaxy S8 lovingly. The Type-C connection is also adjustable, so I don’t have to play a blind game of “hunt for the hole” to hook the phone up.

The SmartBoy kept the phone secure enough that I could turn the entire unit upside down and give it a slight shake without anything slipping out. With that said, the phone had to lose its protective cover to fit, and I wasn’t about to whip the SmartBoy around my head like a madman to test it. If you move around a lot while playing, I’d recommend keeping it to a moderate level. 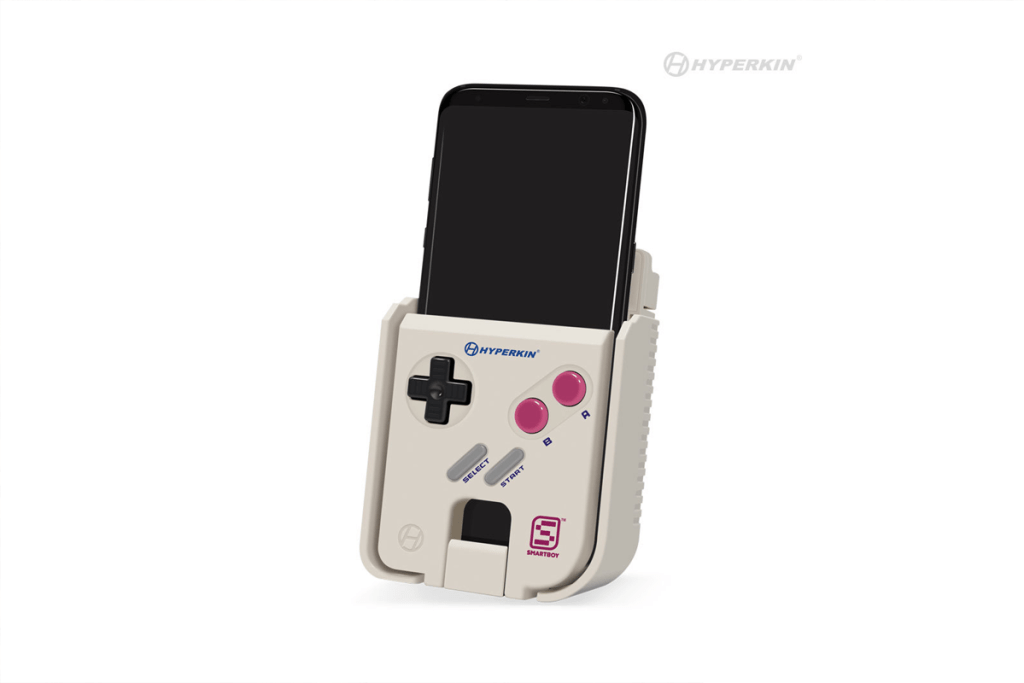 When I first saw the SmartBoy, I assumed it was GameBoy hardware modified to use a smartphone as a display. But the SmartBoy actually puts all the heavy-lifting on the phone, which, just like the Retron, is running games via emulation. In this case, it’s through the My OldBoy! app.

Look, I get it. I can see how this is the easier, most realistic way of doing things. But emulation brings baggage. Depending on the game, the phone, and the overall platform running it, nothing guarantees that the games will run accurately.

On a Samsung Galaxy S8, it felt like there were minor input-lag issues on some games compared to my original GameBoy and GameBoy Color. Is that the emulator, the phone, or the SmartBoy? Who knows?

Setup is a lot of work

The SmartBoy requires two apps to get running: My OldBoy! and SmartBoy Companion. Requiring two apps — and getting them to jive together — comes close to setting off my first-world-annoyance alarm.

It took a reinstall or two to get the two apps to tolerate each other and work together. The SmartBoy also requires users to be comfortable dealing with their phone’s file directory and dealing with setting up an emulator on their device. Warning: The process isn’t as plug-and-play as you may think it is.

Where the setup got really unintuitive, unfortunately, was when I had to verify three pop-up windows while connecting the SmartBoy. You’d think A for OK and B for cancel would be the way to go, but Hyperkin turned the input into a cheat code: A, down, down, right, A.

From one perspective, cool! An 8-bit cheat code! Nod, nod, wink, wink! From another perspective, WTF?! I got this far, and I have to put in cheat codes?

The SmartBoy has no input for putting a charge through to the device you’re using. On the flip side, it took roughly two-and-a-half hours of constant use to drain a Samsung Galaxy S8 with a full charge. That isn’t bad, but if I could charge at the same time, it wouldn’t even be a topic of discussion at all!

If you’re rocking an Apple device, take a walk. If you’re rolling with Android, but you don’t have a native Type-C port, go join the Apple kids, ’cause you ain’t playin’ either.

I tested using a Micro-USB/Type-C adapter on a Samsung Galaxy S5, and it didn’t work. So, you may be out of luck on that front as well.

The SmartBoy is a cool phone accessory, but it’s difficult to know who to recommend it to. Like the Retron, the big issue is emulation. If I own a bunch of original GameBoy cartridges, why would I want to emulate them? If you’re super picky about quality, the emulation issue is the hang up. It’s like an audiophile that owns vinyl considering a player that converts the audio coming out of the speakers to MP3 quality.

The Retron could skirt the emulation issue because it was freeing me from a major physical hassle: having to have a huge, heavy CRT television set around to play games. Owning an original GameBoy, however, is not anywhere near the same type of hassle as dealing with CRTs. And being technically savvy, I have options that include back-light modding a GameBoy unit to make the original screen nice and clear.

If emulation isn’t an issue, then you may already be emulating these games on your phone already. The SmartBoy is definitely a superior input option compared to the onscreen virtual controls of any emulator, but you have to own the original cartridges for it to work. Legally, you all should own the original games before emulating, but let’s also not be so damn naive. A lot of people emulating games don’t, and this is something to consider.

When it comes to playing GameBoy games, the SmartBoy isn’t a bad way to go, but it’s currently not the way.

Hyperkin provided a SmartBoy unit for the purpose of this review.