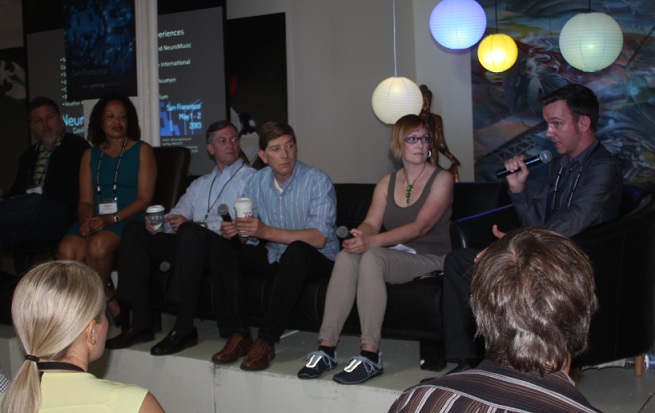 Video games have often been a feast for the visual senses, but smell has been left out. At the NeuroGaming Conference and Expo, some visionaries are talking about how to incorporate the sense of smell into games so that entertainment can become even more engaging, immersive, and realistic in the future. They’re trying to create digital devices that can insert smell into games as we play them.

NeuroGaming is a nascent category of the game business, as defined by conference head Zack Lynch, who organized the event at the YetiZen Game Innovation Center this week. Lynch, the founder of the Neurotechnology Industry Organization, explains Neurogaming as the “technologies that integrate all of our nervous system, not just our brains, into gaming.” It includes technologies that track things like player heart rate, brain wave data, facial analysis, pupil dilation, hand and body gestures, and changing emotional and cognitive state — all toward driving actual gameplay.

Smell is probably going to be the most difficult sense to include in a game in the future. But given the progress of technology, it really isn’t a crazy idea, said moderator Richard Warp [pictured with microphone], the senior audio lead and NeuroMusic composer at Leapfrog Enterprises.

While 3D visuals have advanced over the past couple of decades, every gamer will acknowledge that adding sound to those visuals makes games much more enthralling. This has made headsets and speakers common. Smell gadgets are not common.

Charlene Coleman, the CEO of Sensory Acumen, said her technology is being considered for treatment of soldiers suffering from post-traumatic stress disorder. She said that some smells are soothing and relaxing, while others are not. Some soldiers, she said, can’t stand the smell of bacon if they have smelled burning bodies on a battlefield.

Heather Kelley, a game sense designer at PerfectPlum, said that there is no universal reaction to smells. Some smells trigger very different sensations or emotions in different people.

One problem with smell is that it can dissipate if you’re in a windy environment or outdoors in a city, said Bill Wiles, the president and chief executive at Scent Sciences.

“There isn’t really a scent palette like a color palette,” Wiles said. “It really goes into what effect that you want. Some smells are repulsive to one culture and attractive to others. If you had a wake-up smell in a hotel, what would it be? I thought it would be coffee, but other people said bacon. Certain smells people relate to.”

Some gadget that helps deliver a sense of smell might be necessary. Kelley said that is what helps astronauts, who often lose their sense of smell in space because they miss the air currents that deliver the smells to their noses. She said it would be cool to go up to a sculpture, pass your hand over it, and smell the aromas emanating from the sculpture. That would change your experience of the work of art.

You could also insert a fragrance in a car, soothing someone who is about go crazy with road rage, Wiles said.

Sound also isn’t perfected yet in games, but its hurdles aren’t as giant as those facing smell,  said Steve Horowitz, composer and president of The Code International. Adaptive sound efforts are aimed at creating sounds that match the dramatic tension in a game.

“You can design for 5.1 speakers, but most consumers haven’t set up their systems right so they won’t hear what you’ve designed,” Horowitz.

At some point, smell experts will have to create their own new smells. Who knows, for instance, what a zombie smells like? It’s probably not good, but burnt bacon probably would freak some gamers out.

At some point, “What you are all leading up to what we all want, which is total immersion,” said Wiles. And Coleman said that smell would definitely be part of any Star Trek Holodeck or complete simulated reality experience from science fiction.