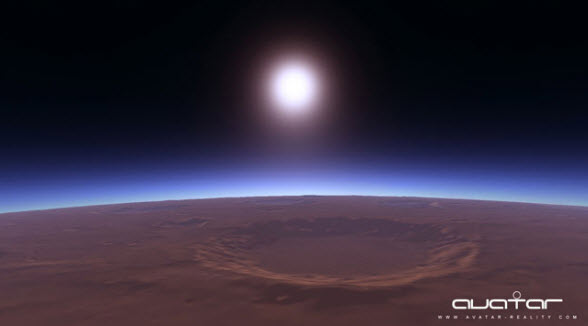 By 2150, it might be possible to breathe air on Mars — that’s if humans are able to develop an atmosphere on the planet. That’s pretty far off. But by next year, you should be able to explore what life on Mars would be like in a virtual world that’s drawing a great deal of attention.

Today, several technology startups are teaming up with the Smithsonian Institution to promote a museum exhibit that illustrates the concept of life on Mars many years from now. On top of that, the Smithsonian will put its weight behind a virtual world being created by its allies, Virtual Space Entertainment and Avatar Reality, a Honolulu-based company that is creating a virtual colonized version of Mars called Blue Mars.

The virtual world will feature outstanding graphics quality — with resolution equal to 1080p, or the best format of high-definition TV. It will let users participate in a futuristic society on a “terraformed” Mars with breathable air.

VSE, which is building out the environment within Blue Mars, has the contracts with the Smithsonian and the National Geographic Society. Avatar Reality is bankrolled by Henk Rogers, one of the video game visionaries behind Tetris. I’ve talked a number of times to Kaz Hashimoto, founder of Avatar Reality, and Rogers about their vision to create a sense of what it would be like to live on an ecologically sustainable society on Mars.

One participant is Big Stage Entertainment, which makes a system that can capture the faces and bodies of people through precision cameras and deliver the images to computers that can reconstruct the faces in digital form. Big Stage will set up a kiosk in the Smithsonian Museum in Washington where visitors can insert their faces onto the bodies of custom-created avatars in Blue Mars.

Big Stage will license its face-modeling technology to Virtual Space Entertainment, which is building out places to live and things to do inside the online world of Blue Mars. VSE is doing work for the Smithsonian to help it build new museum exhibits related to Blue Mars 2150. The online world is scheduled to begin its launch in August 2009, while the Smithsonian is launching some interactive exhibits in 2010.

In the virtual world, users can create a 3-D character and explore landscapes and futuristic cities being created by Syd Mead (an artist who created the futuristic imagery of the sci-fi film Blade Runner) and other artists from places such as the National Association of College Stores, the National Geographic Society and the Smithsonian Institution’s National Museum of Natural History. Visitors can socialize with friends in hip entertainment venues, much like in Second Life, but with better visual realism. They can explore the planet and play social versions of games such as Tetris.

Phil Ressler, chief executive of Sherman Oaks, Calif.-based Big Stage, said that the company was chosen for the 3-D face modeling because it had the most advanced technology.

Big Stage will be paid a license fee and get integration services fees. Founded in 2007, Big Stage has raised $10.7 million and has 22 employees. The company has generated revenue with its face-capture system, which is used for both movie and game making.