In another step to market itself as a leader in augmented reality chat, Snap today is rolling out Snappables, AR filters for games.

Snappables will begin rolling out to users of the Snapchat platform this week on iOS and Android.

Snappables are similar to Snapchat’s popular Lenses, which spruce up selfies with rainbow vomit or puppy dog ears. Earlier this month, a Snap spokesperson told VentureBeat that more than 70 million of its users “play with Lenses in the Snapchat camera every day.”

Like Lenses, a user can access Snappables by clicking on the background of a photo or video he or she is about to take. Snappables will live to the left of the camera, not the right as traditional lenses do.

Snappables will offer both high score and multiplayer games. A video sent to VentureBeat by a Snap spokesperson showed off a game where users had to open their mouth to “catch” eggs that were augmented onto the Snap screen. According to a blog post announcing Snappables, other games will allow users to “fight aliens, start a rock band, and play basketball.” 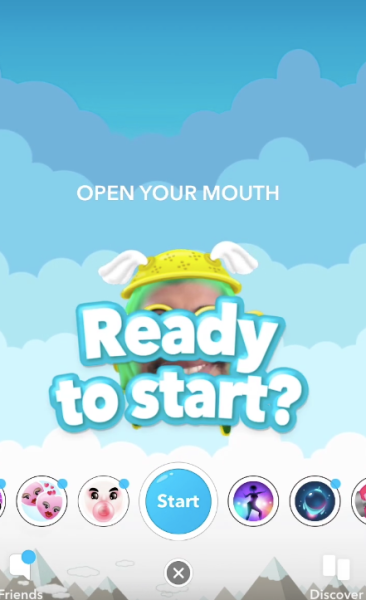 According to a Wired story about the launch of Snappables, the company is also planning on unveiling an “updated spectacles product” later this week.

A Snap spokesperson did not respond to a question about whether or not developers are currently able to create Snappable filters, or when they will be able to do so.

In December, the company rolled out Lens Studio, the company’s first desktop app that allowed anyone to create an AR lens. CEO Evan Spiegel revealed to Wired that developers “submitted” 30,000 lenses to Lens Studio during the first two months the platform was open. The company also rolled out its first ‘shoppable’ AR lens a week ago.