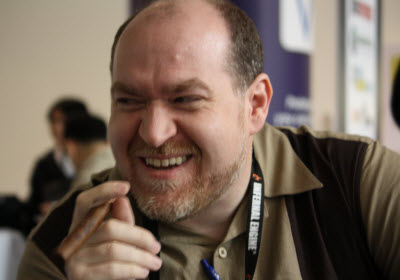 Social network hi5 is unveiling a program today that it hopes will snare more social game developers who will make exclusive games for its 50 million users.

The San Francisco company has been ramping up its strategic shift into games for a while. It hired Alex St. John, a video game pioneer, in late November as president and chief technology officer. A week ago, it announced that it will make its social game platform compatible with Facebook’s so that developers can easily make games that run on both Facebook and hi5. And hi5 also hired a new seasoned management team and acquired the social game and e-commerce firm Big Six. That’s a pretty rapid-fire schedule.

“We are a gaming destination,” St. John said. “That is all we are going to be. Games aren’t something off in a corner for us.”

St. John, who speaks at the GamesBeat@GDC event today on a panel on Disruptive Game Platforms alongside Facebook platform manager Gareth Davis, said that his company will put games front and center and will offer a bunch of services that will help game developers become more successful. It will, for instance, promote games, distribute them and make it easy to monetize them. The company will describe the Game Developer Program this week at the Game Developers Conference.

But rather than try to attract an unlimited number of game developers, as Facebook does, St. John said his company’s effort will be more targeted. That way, he says, there won’t be a thousand games hitting at the same time and competing in a free-for-all by spamming users. (That’s another of many frequent slams that St. John likes to lob at Facebook).

The details of the plan include: free marketing and promotion, such as free banner ads, placement on the hi5 Games page, inclusion on the hi5 Games tool bar, user recommendations, and more for exclusive games. hi5 will also offer access to its hi5 Coins virtual currency system for in-game micro-payments. There are more than 60 payment systems across 30 real currencies worldwide available to the developers.

And hi5 will share revenue on premium advertising. The company will also offer ways for game developers to reach consumers via viral game distribution channels, such as notifications in friend updates. That’s something that Facebook is getting rid of. St. John said that the integration costs are low, and that games may integrate with user profiles and preserve user achievements and high scores on profile pages.

Participants in the program include Immortal Games, Detonator Games, and Exponential Entertainment. Steve Victorino, president of Immortal, said he was glad that initial promotion, user adoption and monetization are under his control. (Another jab at Facebook there). Matt Wilson, head of Detonator, praised hi5’s payment system. And Dave Long, chief executive of Exponential Entertainment, said that working with hi5 has made it easier for the company to post on multiple social networks. Meanwhile, St. John criticized Facebook for being schizophrenic on games, praising games at the same time it restricts them.

“That’s like waving a bone in front of a dog and acting like you are throwing it, and then not throwing it,” St. John said.

In Facebook’s defense, Davis said in a talk yesterday that recent changes in the company’s social networking platform, such as the introduction of the Games Dashboard for users, have met expectations. But he said it was too early to say what effect they have had on traffic. Game developers have worried that it will restrict communication with gamers to the point where they may slow growth of games. If Facebook does that, it will have killed the golden goose.

But Davis said that that Facebook believes in the potential of social games and will do what it can to foster them. The challenge is that the company has to listen to game developers but also has to consider the sometimes competing interest from consumers, who want an experience that is free of spam. The appeal of Facebook, Davis pointed out, is that there will likely be multiple games on the platform in 2010 with more than 100 million users each — that’s a bigger audience than the Super Bowl. Developers who dream of reaching big audiences will have to consider developing for Facebook.

hi5 may have some of the same problems as Facebook. About a third of hi5’s 50 million monthly unique visitors are game players, and so not all of them may be thrilled at the game focus. But St. John said it made sense to focus the social network on apps that make money. And that’s what games are. He said his company doesn’t have all the resources in the world, but the focus makes it easier to prioritize spending.

“We have a great meta game in the network itself, and we will make a transition to better monetization and from shallow to deeper games,” St. John said.