That mainstream appeal for VR continues to elude the mixed reality industry in Western markets is a point I touched on last week when I encouraged startups to embrace China as a go-to-market. I don’t think it’s so much a case of the Asian market being some anomaly that defies the laws of the hype cycle model but, rather, that its industry is more fluid in adapting and aligning itself to its audience than industry leaders are in the West.

In other words, how mixed reality is received and how adoption proceeds has less to do with the current state of the hardware and more on how it is being packaged and delivered.

From the very start of this current VR hype cycle, leaders in the space have been betting the farm on high fidelity content, and continue to do so despite the market signals of 2016. Unity, for instance, accounts for over two-thirds of immersive content, and it is a game engine that is inherently tailored to hardcore gamers.

Square peg in a round hole

While it is reasonable to expect a hardcore gamer to put up with the layers of friction that a game engine’s ecosystem entails, mainstream users are different. Gatekeepers and walled gardens, downloading and installing, and the hard requirement of a VR headset (more on that later) together create way too big a barrier for this to be the right platform-market fit for the mainstream, especially at such an early stage in the industry.

I have been a pretty aggressive advocate during the past couple years about the open web, on the other hand, being the mainstream-ready platform for the job and, thankfully, WebVR, the JavaScript API that allows you to load immersive content on your browser, has been steadily growing in popularity. Its upcoming upgrade to the WebXR API, which soon welcomes AR support so that developers can create mixed reality content that is responsive across the full spectrum of VR and AR devices, will only make it that much more obvious why we should be prioritizing the immersive web.

There is no better way to illustrate why the open web is the best platform for fostering mass adoption than to apply it to arguably the strongest use case for mainstream mixed reality there is: social VR.

Above: Virtual spaces in Hubs by Mozilla

Back in November, Mozilla announced the creation of a dedicated team tasked with enabling the social 3D web, and then last month they released the early preview of what they have coined Hubs by Mozilla. That “people shouldn’t have to be locked in to a specific platform or device”, wrote Sean White, the chief R&D officer at Mozilla, is the essence of why this experiment in bringing people together in mixed reality will, I think, go farther than any pre-existing social VR “application”. And the timing is perfect.

Virtual worlds shouldn’t be difficult to access. Once you enter a virtual space in Hubs, all you have to do is share the URL with your friends or colleagues, and they can instantly join regardless whichever device they have available. Even wearing a headset is optional. Indeed, White characterizes it as letting the technology get out of the way so that the experiences can take center stage.

“Hubs is designed to ensure people can access the product regardless of what devices they own or platform they are on, and supporting users who do not have headsets just yet is a large part of that.” says Greg Fodor, the engineering manager for social MR at Mozilla.

The point isn’t to downplay the value of mixed reality hardware, says Fodor, but that the priority be placed in making the collaborative space as inclusive as humanly possible. That is the glaring weakness that pre-existing social VR applications have to contend with since they are inherently restricted by the fact of being “mini walled gardens” nestled within platforms that are, also, walled gardens.

“We expect a large percentage of users to use Hubs without hardware given the early stage of the market — and even if they do have it, they will probably try the experience first on their phone or PC to understand how it works,” Fodor said.

The unique feature that allows you to participate in web-based immersion without a headset, and therefore democratizes and extends reach and access to literally billions of smartphone and PC users, is made possible by progressive enhancement strategy — loading core content first, then adding on according to hardware ability — and its “magic window.” It is the immersive web’s master key that allows virtual worlds to offer value regardless of whether you have a headset or not.

“The tools need to be easy to use and “just work” on whatever device or browser a user brings to the experience.” says Danny Stefanic, founder and CEO at Learnbrite, a WebVR training and education platform that serves in part as a virtual alternative for corporate collaboration scenarios like team meetings, interactive presentations, engaging webinars, and town hall meetings. 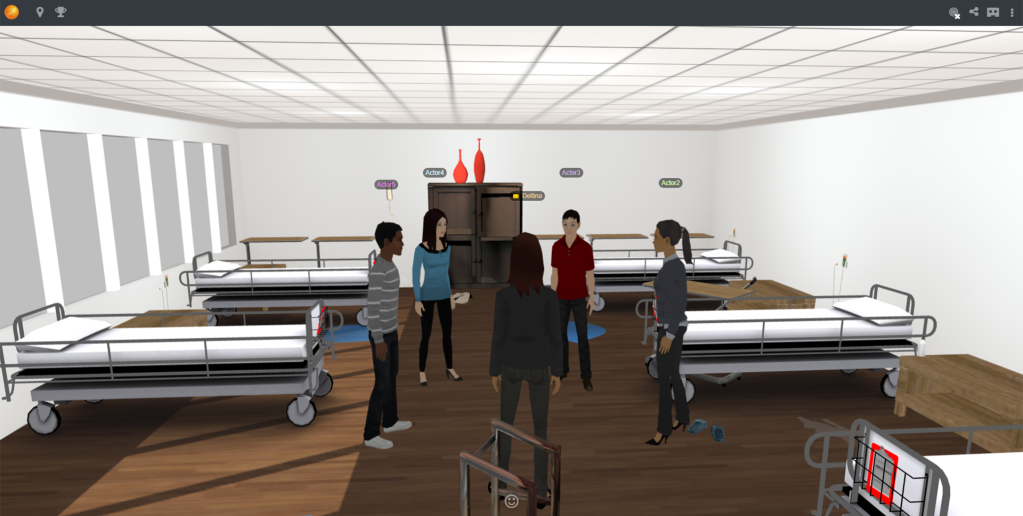 Learnbrite has been in commercial use for three years and therefore one of the earliest champions in the WebVR space. Stefanic himself has been working in the VR industry for over a quarter of a century and has been through three major VR hype-cycles in which he witnessed waves of business models come and go. That vantage offers him the clarity to spot and gauge the gap between what an immersive platform or product demands of users versus what the user capability actually is.

“Organizations still use browsers like Internet Explorer on low-powered laptops, for example. To insist that your customers upgrade their phones/tablets/computers to support VR or deploy new software throughout their organization is just putting roadblocks in front of creating value.”

In fact, the majority of Learnbrite’s clients participate without headsets whatsoever because that’s not where the core value lies. It is instead in the higher engagement levels that are delivered when virtual worlds displace worn-out traditional solutions that have long demanded a digital transformation. Naturally, the upgrade in an enterprise setting is also accompanied with other benefits for companies like reducing travel costs and making up for a lack of physical meeting spaces.

FOMO is the ‘killer app’

I haven’t lost sight of the real advantage that mixed reality promises to deliver in the first place. In the setting of a virtual collaborative space that is intended to facilitate communication in a way that approximates closer to reality, full immersion is no doubt the ideal. But we need to allow progressive enhancement strategy to play its role, to do its magic, and for that we need to offer value at every level of the user experience while at the same time ensuring that increased immersion always entails increased possibility in powers and freedoms of expression.

Above: Immersive gesturing in Hubs by Mozilla

“You can make eye contact, nod your head, high five, dance, and even play catch with anyone around the world, regardless of where you are”, Fodor wrote back in November, as he describes the depth of self-expression that becomes increasingly manifest and approximate to the real world (or beyond) with greater immersion. How any particular experience is progressively enhanced is ultimately up to developers to decide and design.

We have to start looking at mixed reality adoption as analogous to swimming. We don’t learn by jumping straightaway into the deep end, which is what the high fidelity approach has been imposing for years now. Instead, the approach has to be accommodating, it has to let us dip our toes and it has to always offer the option of starting from the shallow end. The deep end of the pool always has its allure, eventually, because it instills a sense of FOMO, or the fear of missing out, and only the open web, the immersive web, can offer that perfect carrot to mixed reality.