The original military-shooter game SOCOM: U.S. Navy Seals earned some dedicated fans on the PlayStation 2, but Sony cut loose its team after poor sales of the fourth title in the series. You could say SOCOM was a victim of the Battlefield-Call of Duty arms race in video game development. But David Sears, the creative director on the original SOCOM, wants to bring the hardcore shooting game back with a Kickstarter crowdfunded project called H-Hour: World’s Elite. 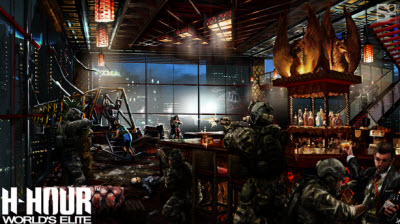 Sears has formed a small team at SOF Studios in Southern Pines, N.C., to create what he calls the “spiritual successor to the original SOCOM” title. He is trying to raise $200,000 in a Kickstarter campaign that has five days to go. As of last night, the Kickstarter had pledges of $188,114. That may sound like a tiny budget for a first-person shooter video game, which could easily take a hundred people more than two years and $30 million to build.

But Sears told GamesBeat that he is just raising money to produce a demo that could generate funding. And he doesn’t think that you have to spend huge amounts of money to chase Call of Duty in the first-person shooter combat genre. Rather than target the widest possible audience, he is aiming to produce a tactical-team shooter that embraces what the early SOCOM titles did best. They focused on authenticity, community through clan competition, and gaming innovations.

If Sears can build a solid prototype, he’ll be able to raise more funds and secure a publisher. Then he can expand his team from four people to include a lot of game developers who have donated their time on a volunteer basis so far. He recalled how the original SOCOM was made with fewer than 50 people.

“We’ve got a superstar team of people who have worked on titles like Rainbow Six, America’s Army, and SOCOM,” Sears said. “I didn’t want to be perceived as greedy and ask for a whole budget to make a shooter. I thought that would be crazy. There are preposterous numbers being spent on game development in an arms race. It’s a bit terrifying. The overhead is astronomical, and everybody is chasing the big two in the shooter market. That is leading to homogenization.”

Sears himself has 22 years of experience in games and worked as the creative director and designer on the original SOCOM for the PlayStation 2 and the PlayStation Portable. He most recently worked on Rainbow Six: Patriots.

The team wants to make H-Hour: World’s Elite for the PC and PlayStation 4. They will focus on a multiplayer experience that includes at least six maps, four new gameplay modes, and comprehensive community-building and clan-management tools. While Sears views the latest shooter games as fun, he believes they have strayed away from realism with lots of random factors such as kill streak rewards that influence the outcome of a game.

“With a SOCOM game, it was skill-based,” he said. “You learned something every time you played. You could improve. It’s harder to do that when you don’t know where the drone is coming from.”

Sears tried to find money through investors and venture capitalists. But each time they wanted to see a demo before they could invest. Sears needs the money just to pull together that demo this year and then begin formal work on the title once a bigger backer agrees to publish the title.

“If I had a demo already, I would go direct to the publishers,” he said.

Sears said he has been working tirelessly for a few months, sleeping little more than two hours a night. He spends much of his time answering questions from fans.

“I just want to survive this Kickstarter,” he said. “We don’t need to sell 17 million units to make a tremendous profit or sell for an average retail price.”

Sears said he hasn’t approached Sony to get the license to make a new SOCOM game, but he knows they are watching his project with interest. When Sony decides enough time has passed, Sears said he hopes to be in the “right position to make a bid for it.”

In the meantime, H-Hour: World’s Elite is his baby. He is creating it in conjunction with a former 20-year Army veteran and other military veterans on the project. Overall, the project will try to reproduce the feel of the original SOCOM but also make improvements on it such as better artificial-intelligence enemies.