The Sandbox has raised $93 million in a funding round led by SoftBank to help grow its virtual world based on nonfungible tokens.

It’s another sign of how hot NFTs have become in an age where Bitcoin’s price is soaring and NFT games are viewed as a stepping stone to the metaverse, another buzzword that signifies the universe of virtual worlds that are all interconnected, like in novels such as Snow Crash and Ready Player One.

The Sandbox is the first investment into crypto assets by SoftBank Vision Fund 2, though SoftBank also invested $680 million in Sorare, a Paris-based NFT fantasy soccer game maker with 30 employees. Arthur Madrid, CEO of The Sandbox, said in an interview that the funding will help the company grow beyond gaming into economies such as fashion, architecture, virtual concerts and shows, art galleries, museums, and more. Madrid and his cofounder Sebastien Borget said they want to build the metaverse.

The company will use the money to hire people, develop more creative tools for players, add multiplayer, expand the number of intellectual properties and brands that are part of The Sandbox, grow user acquisition, and build better infrastructure. 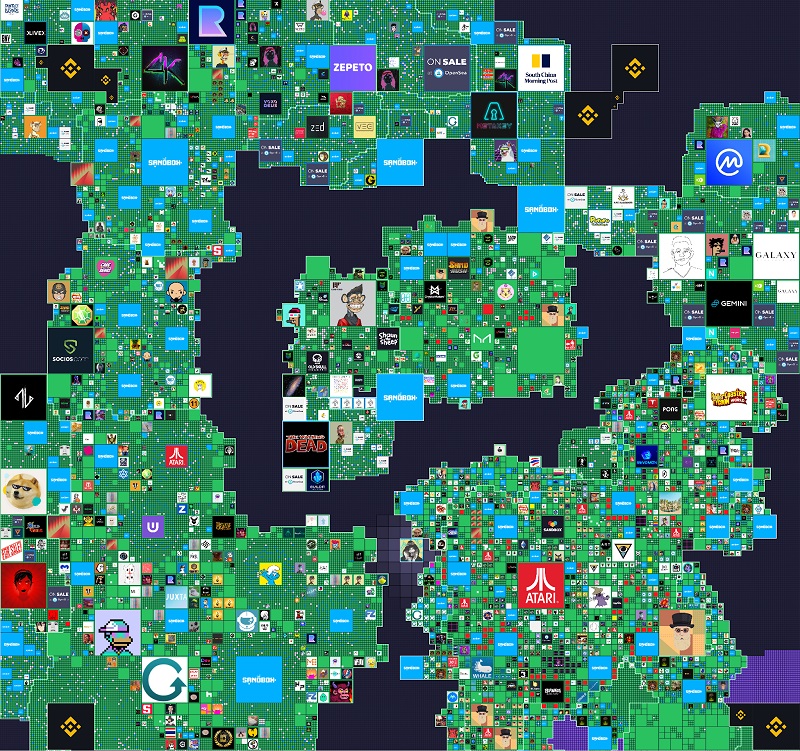 Above: The Sandbox has sold virtual land for more than $144 million.

NFTs have had a bonanza year. If you look at Google Trends, you’ll see that NFTs started picking up in February and skyrocketed after related NFT sales like digital art and NBA Top Shot took off. Dapper Labs has now seen sales and resales of those NFTs top $780 million. In March, an NFT digital collage by the artist Beeple sold at Christie’s for $69.3 million. It sounds so dumb. The popularity of NFTs have exposed some serious drawbacks too in numerous scams where people steal art and sell it as their own NFTs. 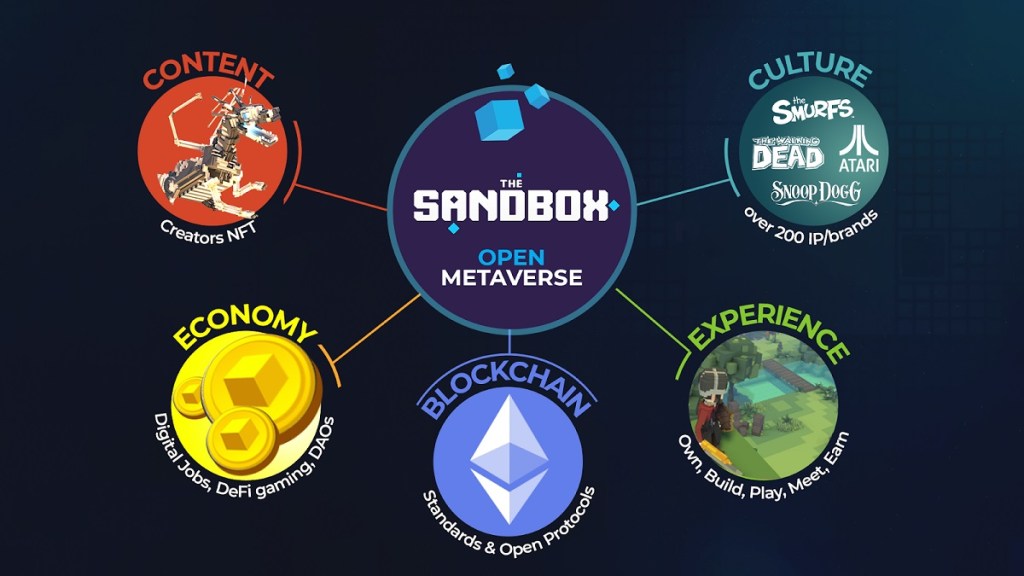 Above: The Sandbox wants to build the metaverse.

And the investment is a big validation for the strategy of The Sandbox founders Arthur Madrid and Sebastien Borget (Borget will be speaking at our GamesBeat Summit Next online event on November 9-10). They started in 2011. I wrote about them back in 2013, when they were running their company as Pixowl in Paris. Borget showed me games such as Doodle Grub. That cute game suffered a setback when Apple representatives said the graphics were too crude. But it took off in 2012, and it launched the company on the road to The Sandbox.

Much like games like Minecraft, The Sandbox was a blocky world where players could combine lots of elements to make new ones and create their own digital creations. As they heard about NFTs, they started re-creating a new version of The Sandbox. And they sold the company to Animoca in 2018 for $4.875 million in cash and stock. Now the company has more than 200 employees.

“I’m very grateful, but we really want to deliver,” Madrid said. “We’ve been working together for more than 14 years and building companies for more than 20 years. It’s exciting for our friendship, our partnership.”

Overall, The Sandbox has had 40 million downloads over time. Animoca Brands (which has raised $203 million this year) has a bunch of blockchain-focused subsidiaries, including The Sandbox, Blowfish Studios, Quidd, Gamee, nWay, Pixowl, Bondly, and Lympo. In this funding, The Sandbox is raising the money for its division.

“We are fully autonomous on operations, governance, and the way we are shaping the vision,” Borget said. 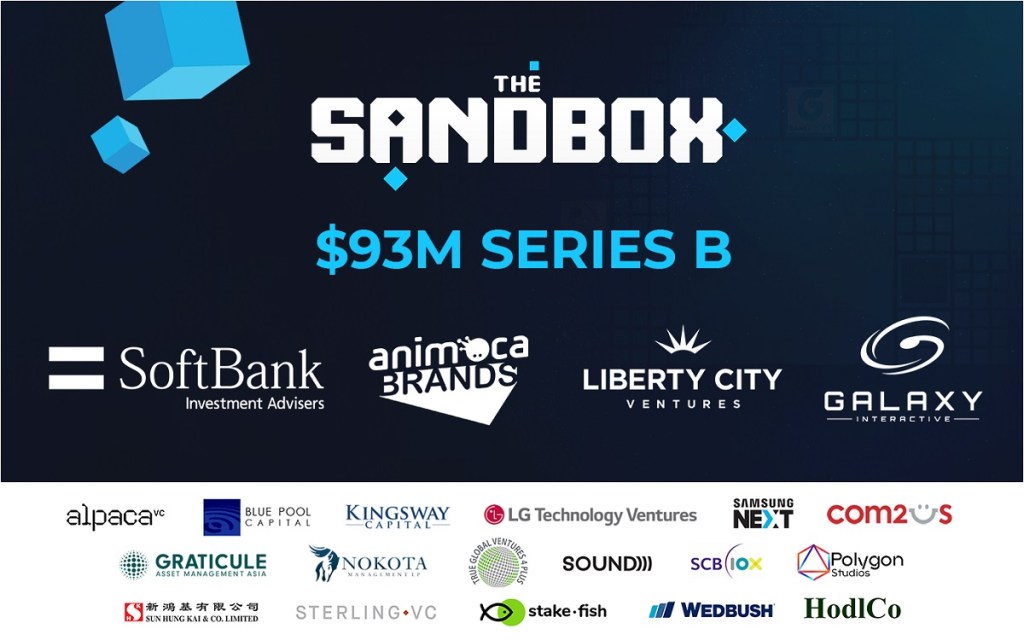 Above: The Sandbox has raised $93 million.

One of the unique aspects of The Sandbox is that it is not just a gallery of games. Instead, it is a virtual world with a topographical layout that you can explore using your 3D avatar — at least when everybody builds out their properties. A fixed amount of land has been set aside, and around two-thirds of it has been sold so far.

“We won’t expand it,” Madrid said.

As you walk to the border of one land, you can walk into an adjoining land, the company said. This makes the location of a game experience very similar to real-world real estate: your location and who your neighbors are become nearly as important as the quality of the entertainment experience.

With this funding in place Borget said in an interview with GamesBeat that Web 3 and decentralization — as enabled by blockchain tech such as NFTs — is the next clear trend for the future of computing and the internet.

More than 30,000 artists are selling items. Players have been buying and selling a lot of virtual goods for the SAND virtual currency. Hundreds of players are now streaming activity at any given moment, and the number of views and engagement per stream is growing. 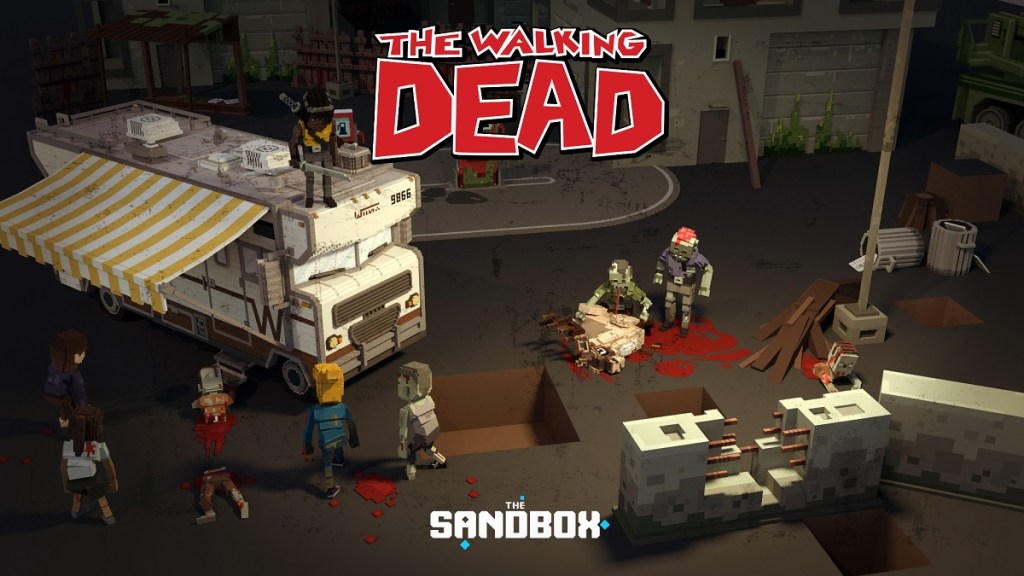 With the new version of The Sandbox, the company started selling its virtual real estate as NFT-based digital property, and the brands came swarming in. Brands and celebrities and game companies such as The Walking Dead, Snoop Dogg, and Atari have all purchased segments of virtual land, and The Sandbox has sold more than $144 million in gross merchandise value for its land. The game has over 12,000 virtual land owners, including 165 brands, and more than 500,000 registered wallets.

Operating under its new name, The Sandbox is going to accelerate the development of its open metaverse, supporting more creators and involving more brands and intellectual properties.

The Sandbox players will be able to use the play-to-earn model to monetize time spent in the metaverse. Play-to-earn creates a circular economy with supply and demand where the resources collected by one category of the players are sold and purchased by another category of player or creator, rewarding participants for their time. 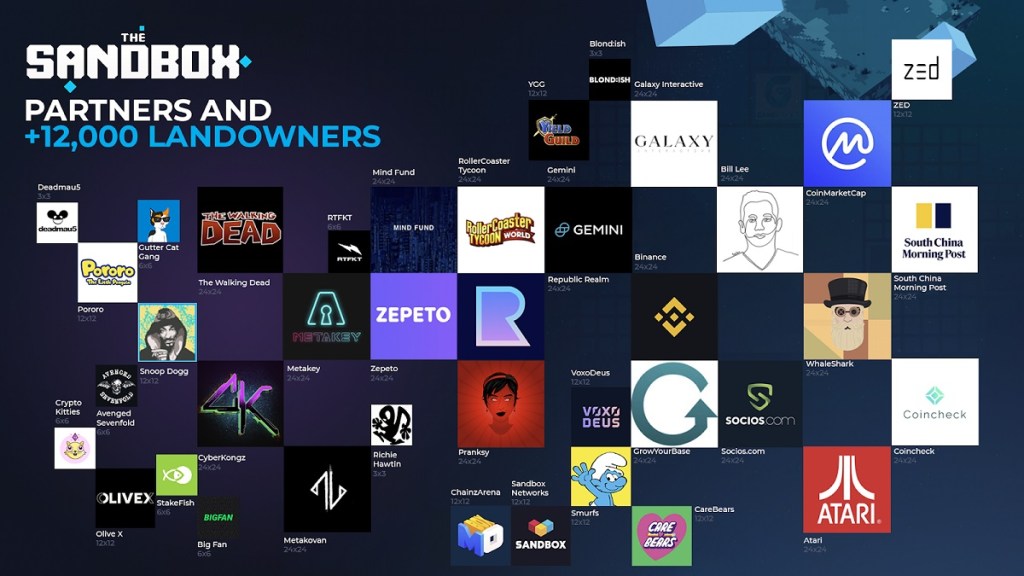 Above: The Sandbox has more than 12,000 landowners of its virtual property.

The Sandbox creator’s economy is expanding rapidly, creating new categories of digital jobs such as NFT creators, virtual architects, game makers, and more. The Sandbox’s vision to turn players into creators and push for a player-owned economy is expanding beyond gaming into fashion, architecture, virtual concerts, virtual shows, art galleries, museums, and more — developing a whole ecosystem and digital opportunities.

“We believe The Sandbox is constructing an open metaverse, unlocking new economic opportunities by empowering people to build and monetize their creations, from avatars and buildings to games and collectibles,” said Aaron Wong, investor at SoftBank Investment Advisers, in a statement. “Leveraging blockchain technology and decentralized governance, the company is putting the power and control in the hands of its users, resulting in a thriving global community. We’re excited to partner with Arthur, Sebastien, and team as they continue to transform what it means to have true digital ownership.”

Wedbush Securities acted as exclusive placement agent and financial advisor for The Sandbox, and Rubicon Law provided legal counsel to The Sandbox.