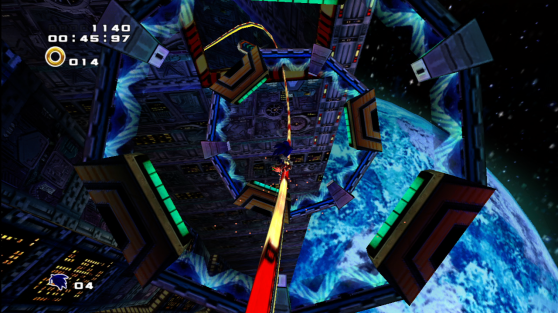 Sonic Adventure 2 was originally released in 2001, only a few months before Sega officially stepped out of the hardware market. That makes it the last Sonic game to appear on one of Sega’s platforms, so it does carry some relative historical importance.

Now, following in the footsteps of other Dreamcast hits like Jet Grind Radio and the original Sonic Adventure, Sonic Adventure 2 has come to Xbox Live and the PlayStation Network. Does it take us back to the days when this series was still good, or was it already bad back then, and we just hadn’t realized it yet?

Please note that under no stretch of the imagination am I saying that the story itself is anything but nonsense. Series villain Dr. Eggman (née Robotnik) wants to destroy/take over the world with the help of a mysterious black hedgehog named Shadow, and Sonic and his friends have to stop them. Along the way, Sonic gets arrested (apparently people think all hedgehogs look the same), you have to chase after the President’s limo on a wacky Go-Kart track, and everyone finds their way to a long-abandoned space colony. Even after watching the surprisingly long cutscenes, it doesn’t make a lot of sense.

But it’s not all so silly. The story mode is divided in two halves, the “Hero” side and the “Dark” side, allowing you to play through with either the good guys or bad guys. This in itself is nothing unique, but the way Sonic Adventure 2 handles it is by having both campaigns cover the same ground. The “Hero” story is very straightforward (and pretty generic), showing each level from the perspective of Sonic or one of his friends as they stop the villains from doing something villainous. The “Dark” story, however, flips it and tells the exact same plot from the perspective of those villains, revealing a bit of actual nuance along the way. Yes, really. I didn’t believe it either.

It turns out that some of the bad guys aren’t all that bad, and when a “Hero” side cutscene will simply show Sonic vowing to stop whatever they’re planning, its “Dark” equivalent will touch on the motivation that is driving the ostensibly evil character to do whatever it is they’re doing. Not that it’s necessarily well-explained or interesting or believable, but it’s presented in a way that feels more clever than it has any right to be. 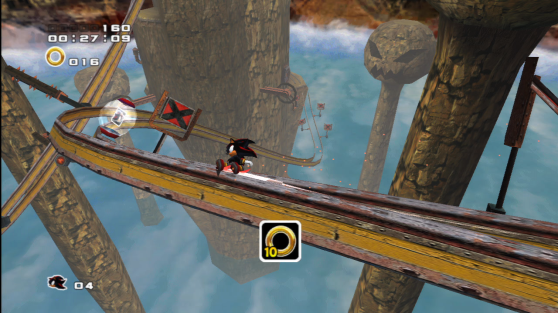 For most of the levels in Sonic Adventure 2, you don’t control Sonic (or Shadow, who plays the same). As Tails and Dr. Eggman, you walk around in robot pants and shoot enemies with rockets and lasers. As Knuckles and newcomer Rouge the Bat, you explore levels and hunt for specific pieces of treasure. These sequences aren’t the most fun, and obviously nobody comes to a Sonic title hoping to play as Rouge the Bat, but they are functional palate cleansers in-between the high-speed Sonic and Shadow stages.

The thing is, it still makes sense even when you’re not Sonic. Most of the time you’re doing things that feel appropriate to the series … aside from some of the robot shooting, but that works well enough to not feel like a meaningless addition. If you’re wondering why “making sense” is worthy of praise, you might not remember 2009’s Sonic and The Black Knight or 2008’s Sonic Unleashed, which respectively featured sword fighting and turning into a monster called “The Werehog” (it’s like a werewolf, but … a hog, I guess?). Those ideas do not make sense and do not feel like natural additions to the Sonic formula, so it’s nice to go back to Sonic Adventure 2 when Sega was (for the most part) still trying to perfect a more pure 3D Sonic game. It has less of a focus on wacky gimmicks, and it’s not trying to recapture the glory days (like in Sonic Generations); it’s conceptually simple without feeling boring or stupid. 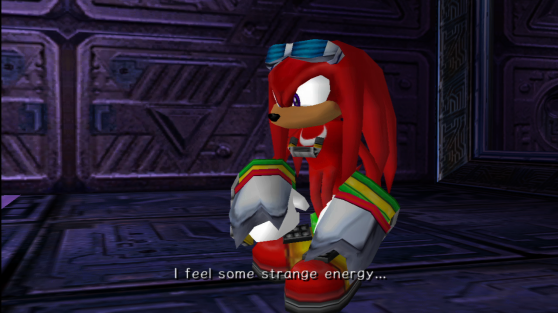 Anecdotally, my Xbox completely crashed 10 minutes in when I was fighting the first boss. While nothing that serious happened again, a few other issues did pop up. The most maddening one involved the jewels/keys you’re supposed to find in the Knuckles and Rouge treasure hunt missions not spawning correctly.

These levels are the most time-consuming as it is, since they rely on a fair amount of aimless searching and vague clue deciphering, but they become substantially more so when the items don’t actually appear like they’re supposed to. It’s shockingly hard to find a treasure that does not exist. I ran around several of them for upwards of 15 minutes without finding anything (and without being able to access the hint-giving computer screens either) before giving up and restarting.

It seems a little unfair to criticize a more than 10-year-old 3D platformer for having a bad camera, and to point out how many years after the still-excellent Super Mario 64 it originally came out (five, for the record), but when you’re more likely to die from not being able to see where you’re going than from being attacked, it is, and will always be, a major problem. This is certainly the case in Sonic Adventure 2, especially in the Sonic and Shadow levels where you’re running as fast as you can and the camera will occasionally swing around for dramatic angles that may look cool, but can make navigation impossible.

You do have control over the camera most of the time, but it circles around so slowly that it’s effectively useless unless you’re standing still. In the Tails and Dr. Eggman levels, where you’re constantly on the move but doing so at a fairly slow pace, it’s barely an issue. Everywhere else, however, it’s crippling. Assuming you’re following a very specific (yet unpredictable) path through the Sonic and Shadow levels, you should be able to get through them fine except for the parts where things slow down and you have to explore a small area or perform some particularly precise platforming. You never know when something important is just outside of the camera’s scope, or when it will suddenly decide to switch over to a weird spot so it can set up a cinematic shot of you bumping into a previously invisible enemy and falling to your death. 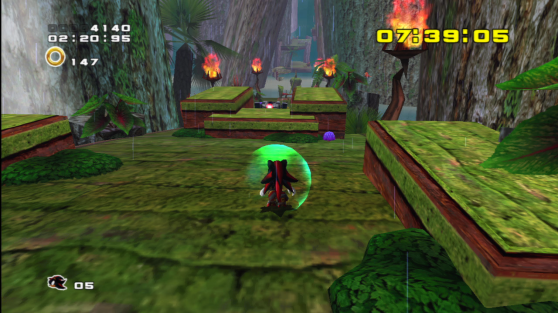 It is very frustrating

Speaking of bumping into invisible enemies, sometimes that’s not the camera’s fault. Sometimes you’ll be forced into a spot where an evil robot will appear with no warning and give you no chance to evade unless you’ve already been hit by it before (and therefore know it’s coming). Or there will be a jump you need to make without knowing where you’re supposed to land, or multiple paths you can take where only one of which won’t kill you. Obviously, some of this comes from wanting to encourage you to play through every stage more than once, and that’s fine. Sonic Adventure 2 features several reasons to do just that, with higher scores, extra unlockables, and one really cool bonus area that can only be accessed by beating each level’s multiple objectives.

However, there’s a fine line between requiring you to plan ahead and having completely unfair challenges. Unfortunately, Sonic Adventure 2 falls on the bad side of that line far too often for your deaths to feel like anything but cheap tricks on the part of the level design or the enemies. Couple this with a checkpoint system that hasn’t been changed since the Sega Genesis, and you have game design that isn’t so much “retro” or “old school” as it is archaic.

Sonic Adventure 2 HD isn’t terrible, it’s just a relic from an unpleasant era. All of its problems are the sort of thing that plagued countless games back when Sega originally put it out, but they’re also the sort of thing that people figured out how to fix in the years since. It’s worth remembering for being Sonic’s last title before Sega dropped out of the hardware business and started depending on stupid gimmicks to sell their most iconic property, but those with fond memories might be better off holding on to those instead of facing the reality that Sonic Adventure 2 simply does not hold up to today’s standards. 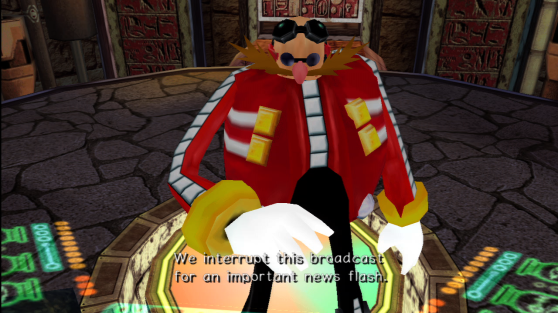 Sonic Adventure 2 HD was released October 2, 2012 for the PlayStation 3 and Xbox 360. The publisher provided GamesBeat with an Xbox 360 copy as well as the Battle DLC for the purpose of this review.