After years of disappointments, with only a few decent games offering a small reprieve from an onslaught of garbage, the Sonic series has its first great entry in years. Sonic Mania, which comes out on August 15 for PlayStation 4, Xbox One, and Switch (the PC version follows on August 29), goes back to the franchise’s roots, both aesthetically and gameplay-wise.

Most modern Sonic games focus on pure speed. Sonic Mania is, finally, a true platformer. It also brings back Sonic and friends’ charming 16-bit looks, while sparing us from the awkward cutscenes with poor voice acting that have become a fixture in the franchise.

And, big surprise, going back to basics has given us the best Sonic game since Sonic & Knuckles came out back in 1994. 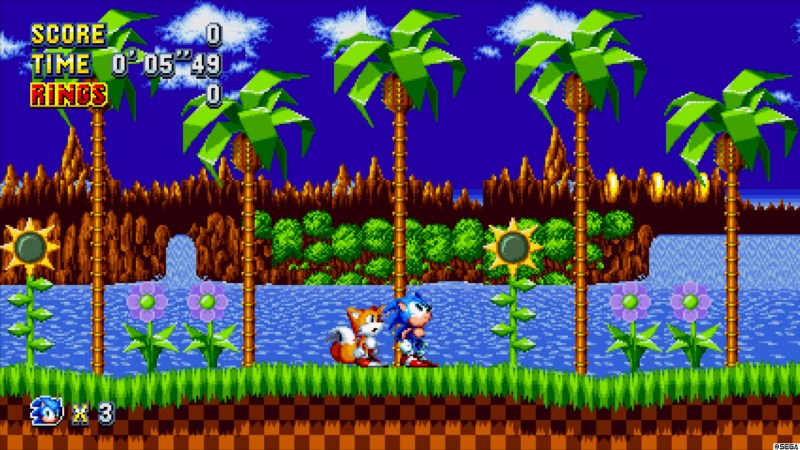 Above: Familiar, but new.

If you ever played the original Sonic games on Genesis or Sega CD, Sonic Mania will feel familiar. It’s actually closest to Sonic the Hedgehog 3, as it has many of that entries powerups (like an electric shield that lets you double jump and attract rings). Sonic usually only has one move, jump, so it’s pretty simple. But he’s able to build up a lot of speed, so the challenge comes from trying to keep your momentum while avoiding enemies.

But, and this is a lesson so many modern Sonic games never learned, it’s not all about speed. Levels will have plenty of sections that force you to slow down and carefully maneuver around enemies or tricky platforms. The mix between the running and platforming is what keeps Sonic Mania interesting.

Levels also have multiple paths. Generally, you want to stick to the higher routes to beat stages quickly, but a single mistake can send you plummeting to lower areas of the level. These branching paths make multiple playthroughs feel fresh, since you can still discover new areas of a stage even after beating it several times. 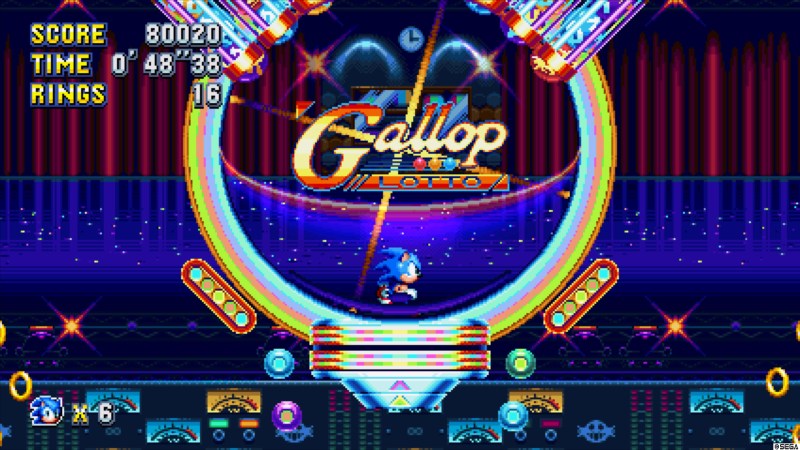 Above: Studiopolis is a fantastic stage.

It looks better than old

At first, Sonic Mania might just look like an HD version of one of the older games. Some of the levels even come from past titles. But some nice touches make Sonic Mania feel modern even as it apes the 16-bit style. The character sprites have more expressive animations. Sonic won’t just strike a pose after beating a level, he triumphantly leaps into the air before hamming it up for the camera, and backgrounds have more detail.

The remade levels aren’t exact copies. While the first act of each mostly borrows from the original, the second act is new. Take Chemical Plant Zone, for instance. The first act is familiar to anyone who played the level in Sonic the Hedgehog 2, but the second part twists things up by introducing new areas and mechanics, like bouncy goo floors.

But this isn’t just a collection of stages inspired by older games. Most of the stages are new, and they’re all colorful and creative. Studiopolis has a city/movie theater theme that dazzles with neon, while Mirage Saloon Zone takes Sonic to the Old West. Sonic Mania’s team was able to craft levels that would have fit into any of the classic games. 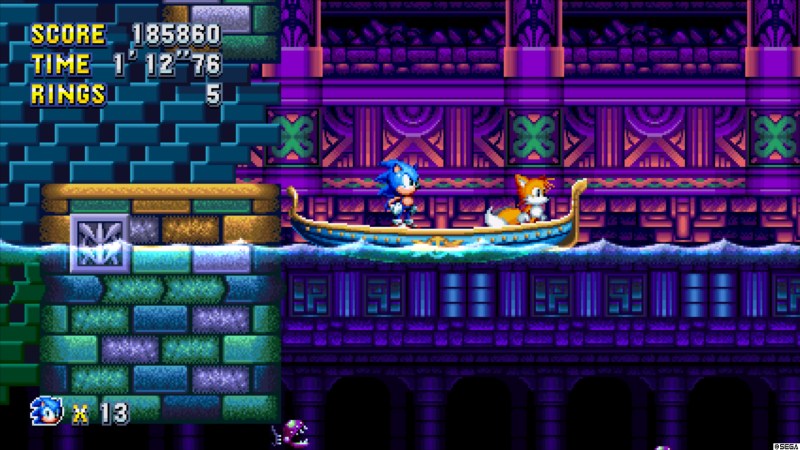 Above: It’s not a Sonic game without a water level.

Sonic Mania really is a love letter to fans who enjoyed the hedgehog’s ’90s run. Besides the returning stages, Sega has filled levels with obscure references that only hardcore Sonic fans would appreciate, including cameo appearances from a couple of characters from the Sonic arcade fighting game, Sonic the Fighters

Some of the references become actual gameplay elements. I don’t want to ruin the surprise, but one of the bosses is an homage to one of Sonic’s more obscure Genesis games. I was actually screaming at my TV in disbelief and glee when I realized what was happening. 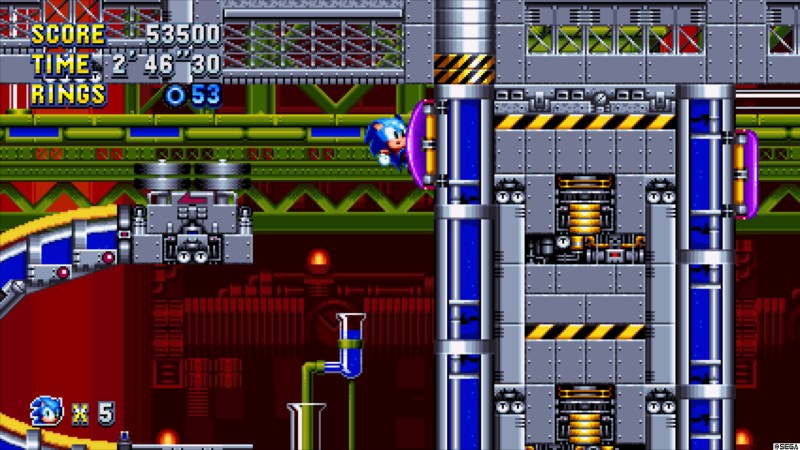 Sonic Mania is about as long as the classics, so you can beat it in a few hours or so. That might seem short, but the game has plenty of incentives to get you keep you interested. First off, Tails and Knuckles are also playable. Each has their own abilities (Tails can fly for a short period while Knuckles can glide and climb) that give them access to their own unique routes, so it’s worth going through Sonic Mania as each of them.

You can also play through levels in a Time Attack mode. You game has leaderboards for every act, so you can compete with players around the world.

Sonic Mania also has a few multiplayer options. Just like with Sonic 2, a second player can take control of Tails. It’s not a true co-op experience, as Sonic can often run and leave Tails behind, but the second player is helpful during boss fights (Tails can get hit, but he can’t die) or reaching high places (Tails can grab Sonic while flying).

If you want something more competitive, you can race. Sonic Mania has a splitscreen that has two players competing to finish stages faster than the other. You can also choose any of three characters, so it’s also a fun way to see if Knuckles’ climbing or Tails’ flying is more useful for quickly navigating stages. 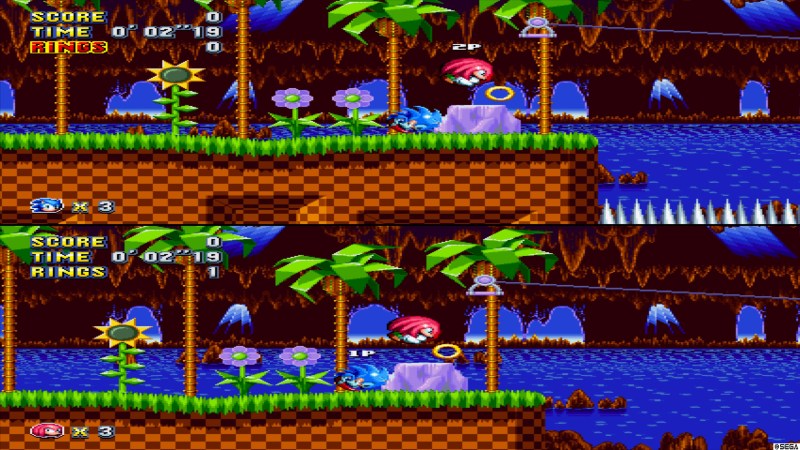 Above: Friends can race through stages.

Sonic Mania has two kinds of bonus stages. One of them is completely new, and it’s great. It has you running in a 3D area, collecting rings and orbs as you try to gain speed and catch up with a UFO. You access these by finding giant rings hidden in stages, and beating these stages gives you chaos emeralds (which you’re going to want to grab all of them if you want to truly beat the game).

The other kind of bonus stage is the one from Sonic 3. It has you automatically running in a spherical grid, turning left or right as you try to touch all of the blue spheres while ignoring the red spheres. It’s OK. Honestly, this was always my least favorite of the Sonic bonus stages, so it feels like a weird pick to bring back.

What I hate, though, is how often you come across these. You can access the blue sphere stage any time you touch a checkmark while having at least 20 rings, which isn’t difficult to do. And every stage has a bunch of them. Now, you don’t have to enter the bonus stage, but beating them gives you special coins which unlock some extra stuff. So, you know, you want to.

But playing these long, difficult, and sometimes nauseating blue sphere stages so often breaks up the flow of the classic Sonic gameplay. You could actually spend more time in them than the actual level if you enter every bonus stage portal you find. I eventually just decided to ignore them, accepting that I’ll have to get those coins in another playthrough dedicated entirely to blue spheres. 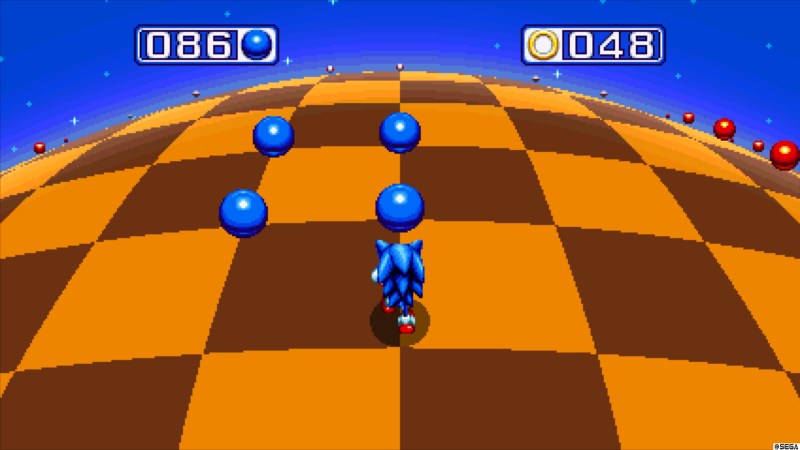 Above: I got sick of this quick.

This is the Sonic game I’ve wanted for decades. I know that we already have a Sonic 4 (surprise: it was awful). This should have been Sonic 4. It brings back the classic platforming while introducing clever bosses, interesting levels, and some of the best sprite art I’ve ever seen.

Sonic Mania isn’t just a great game for old Sonic fans. It’s a great game. This inspiration from the past should be Sonic’s future.