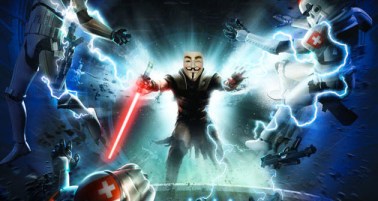 File this one under “things not to do when dealing with massive network outages.” Sony has kicked the hornet’s nest today by blaming Anonymous, a massive network of hackers that regularly takes up activist causes, for indirectly causing a breach of security in its PlayStation Network (PSN) online gaming network that led to the attack that brought PSN down.

While the company isn’t blaming Anonymous for the attack itself, it said the hackers that stole gobs of sensitive data about PSN users were able to break into the network while it was defending itself from denial of service attacks orchestrated by Anonymous. Anonymous took on Sony after the company went after famed PS3 hacker George Hotz, who reverse engineered the PlayStation 3 to run unauthorized programs.

When the PlayStation Network crashed on April 21, Anonymous said it was not behind the attack. Instead, the hacktivist group said, “Sony is incompetent.” But an observer of the IRC forum used by members of Anonymous said the attackers behind this current Sony outage appear to have learned their methods from Anonymous’ activities of two weeks ago.

This really is not the time for Sony to start playing with fire. Anonymous doesn’t regularly respond to blame and threats, but because the network of hackers has taken on Sony before, there is no guarantee Sony’s latest accusation won’t spark some kind of retaliation. Anonymous has proven time and again that it is a force to be reckoned with. Sony has to focus on beefing up its network, not trying to shift blame around and incite more attacks against the already feeble network.

Hackers attacked the PSN on April 19, forcing the Japanese company to bring down the network, which has more than 77 million registered users. The nightmare then continued after hackers broke into the company’s Station.com site, which serves as a host for its PC games like Everquest. Hackers were able to steal information from as many as 24.6 million accounts on that site, according to Sony. In all, more than 100 million accounts might have been compromised.

The PSN breach was a massive security gaffe that has caused the U.S. government to get involved and demand answers — such as who attacked the network and what users were affected. Sony has sent warnings to PSN users about the possible credit card theft. The whole ordeal spawned an apology from Sony that lasted more than an hour and a half.