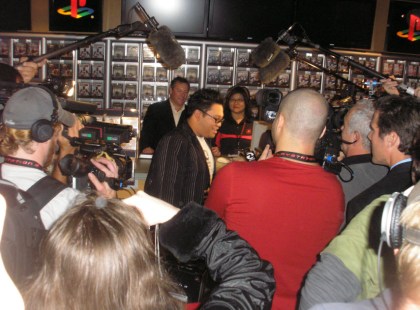 Sony is closing down its one-and-only U.S. PlayStation store at the Metreon mall in San Francisco. The recession is clearly to blame.

Sony will also close the Sony Style store in the Metreon. Sony Style stores are peppered throughout the country. But the PlayStation store was the flagship location for Sony’s game business in the U.S. It’s sad to see this announcement just ahead of another Game Developers Conference. The store will be shutting sometime in the summer. Where will the game geeks go now during their breaks next year?

I’ve spent a lot of hours over the years in the PlayStation store. It opened in 1999 and occupied 5,500 square feet of the 350,000-square feet mall. Sony sold off its interest in the Metreon to the Westfield Group and Forest City Enterprises in 2006, according to GameSpot. You could always see the latest games at the PlayStation bar or watch demos on a big-screen TV.

I was there in 2004 when Sony launched its PlayStation Portable at the store. I was also there in 2006 when Sony launched the PlayStation 3 at the store. People lined the streets for the midnight launches. The store managed to create an emotional connection with its customers. But its decline is apparently emblematic of bigger problems with Sony, which has seen its fortunes turn from first place in the console business to third place. The news of store closure surfaced a day after Sony announced it had sold 50 million PSPs. (Nintendo’s DS is on its way to 90 million).

Yes, I guess you could say that one store closing — an iconic store — is a sign of the times. It’s worth noting that Sony is retreating at a time when Apple is expanding its number of stores. And Microsoft — which opened and shut its own store at the Metreon — has plans to open a chain of its own stores.