Sony’s PlayStation Network is getting a boost today as the company announces its deal to add movies and TV shows from NBC Universal to its nascent online video store. 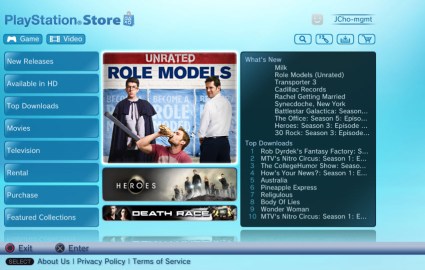 But the race is getting interesting. Microsoft has 17 million active members on its Xbox Live network, while Sony claims it has 20 million registered to date on both the PS 3 and PSP platforms. Microsoft likes to point out that Sony won’t divulge how many of those members were active in the last month.

Grace Chen, senior manager of the PlayStation Store, said the new NBC Universal content is available in standard or high definition video. It includes 75 movies — from Oscar-winning Milk to older comedic classics like The 40-Year-Old Virgin, Scarface and The Big Lebowski. One can also find new releases like Wanted, Hellboy II: The Golden Army, Death Race, The Incredible Hulk and Burn After Reading.

TV shows are from both the Sci-Fi Channel and NBC. They include The Office, Heroes, Eureka, Battlestar Galactica and 30 Rock. Sony now has deals with all of the major film studios, Chen said.