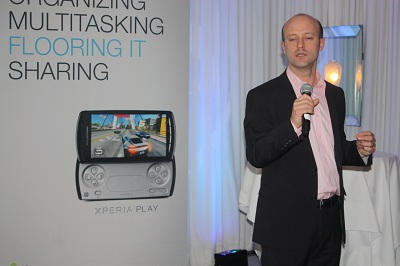 Sony Ericsson showed of its new Xperia Play phone at the Game Developers Conference today in hopes of winning over game makers to its first-ever PlayStation-branded device.

The device has a unique identity that blends a smartphone and a gaming device into one, making it stand out from lots of other smartphones or game handhelds on the market. The question is whether game-focused smartphone buyers will opt for this rather than dish out money to two different devices.

Game developers are in the middle here because they can make or break the platform. Mobile developers are being torn in many directions as platform owners try to recruit them to make games for their phones. What Sony needs is someone to create the equivalent of Angry Birds, the top seller on the iPhone, as an exclusive for the Xperia Play. That won’t be easy to do.

Sony showed off the phone at the recent Mobile World Congress, and we got our first close-up look today (see video below). The game experience is pretty good, but it will have a lot of competition ranging from the Nintendo 3DS to the Sony NGP, a high-end device with a quad-core processor, coming soon.

The new Xperia phone is “PlayStation certified,” meaning it can carry the Sony PlayStation brand name and can use Sony’s control scheme for controlling games, including its signature D-pad button controls and its circle-square-triangle-X buttons. But in what is sure to be a disappointment to fans, there are no titles directly imported from Sony’s library of PlayStation Portable games — at least so far. These are all Android titles. 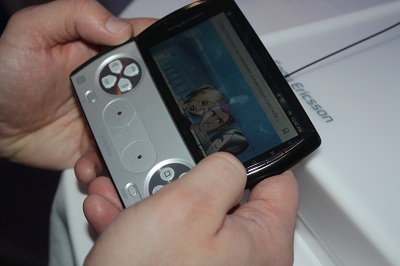 But the phone also has a touchscreen — partly for controlling phone functions or the user interface — as another way to control games. It has two analog control circles in the middle of the device’s pop-out game pad as well. Lastly, the phone has “shoulder buttons” behind the screen and motion sensors.

Peter Farmer (pictured), head of marketing for North America at Sony Ericsson, said that versatile control scheme means you can play a wide variety of games in a wide variety of styles. More than 20 publishers have committed to making games for the phone and roughly 50 titles are in the works for it. The phones will hit the market in April from carriers such as Verizon and Rogers (in Canada). Sony announced that Unity Technologies would support development for the platform. Brian Bruning at Unity said that it would take a matter of days to port games to the Xperia Play and then a matter of hours to optimize the game for the controls.

“We are talking about the convergence of smartphones and gaming and this is smack dab in the middle of it,” Farmer said.

Sony Ericsson said that it has a marketing relationship with Major League Gaming, the professional gamers league, which will now start a joint promotion by adding a new mobile tournament ladder to its pro gaming circuit. The Xperia Play phone has a 4-inch FWVGA screen, a 5-megapixel front camera and a VGA front camera. It can use a variety of Wi-Fi speeds and its memory is expandable up to 32 gigabytes, with eight gigabytes included. It uses the 2.3 version of the Google Android mobile operating system.

Check out the hands-on video below.