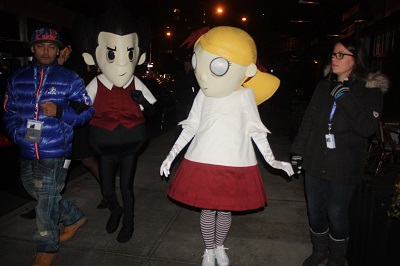 Above: At the launch

The company’s next-gen console is now on sale for $400 at retailers around the country (it comes out Nov. 29 in Europe). Sony held its launch event in New York at the Standard High Line Hotel in Manhattan, where the Japanese company rented out the whole hotel and put up a cool light show of video game scenes on the walls.

More than 500 fans showed up to be the first to pick up their pre-ordered PS 4s at the Standard. The earliest fans to show up came on Wednesday, which means they waited in the cold for more than 24 hours.Pictured at top is the first guy. Geoff Keighley, host of SpikeTV’s GTTV game show, hosted a live TV show with exclusive clips of the next Uncharted game on the PS 4 and downloadable content for The Last of Us.

The PS 4 uses eight of Advanced Micro Device’s “Jaguar” cores, or processing brains, and it has AMD’s Radeon Graphics Core Next as its core graphics design. The machine has a built-in 500-gigabyte hard drive, has a higher 1080p screen resolution and runs at 60 frames per second.  Jon Koller, vice president of marketing at Sony’s U.S. game division, said in an interview with GamesBeat that these technical features will turn out to be advantages over Microsoft’s Xbox One game console, which launches Nov. 22.

The DualShock 4 controller replaces the PS3’s Sixaxis controller. It has a touchpad, light sensor and share button.

“That’s going to make a difference to gamers,” he said.

Among the celebrities on hand were Sony’s top game executives, Andrew House, head of the worldwide PlayStation business, and Jack Tretton, head of North America. Both of them autographed the first console sold at the event. Others present at the event were Pete Parsons, chief operating officer of Bungie; Metal Gear game series designer Hideo Kojima; and the top executives of Naughty Dog.

Joey Chiu of Brooklyn was the first guy to get one at the event. He said he was going to play Knack when he got home,and he said he would not sell it on eBay. Chiu showed up on Wednesday morning at 9 am. He got a voucher to show he was first in line, and Sony gave him and others free hotel rooms. He wasn’t exactly authorized to take off work.